The brakes on the Pres' truck had been acting up and he decided enough was enough!  Putting the truck in neutral and placing a rock behind the left rear tire, he began his search.  When he finished he opened the door and said, "Are you ready?"

We were heading out to do a few errands.

Extending my hand to reach the door on the passenger side of the truck, it began to roll down the hill right toward our fence....our wooden fence!  Unbeknownst to me, the Pres had walked around the back, removed the rock and FORGOT THE BIG, HEAVY, RED, DODGE DIESEL WAS IN NEUTRAL!

Careening down the hill and heading toward our wooden fence the truck seemed to gain speed as I stood there screaming, "Honey, get out of the way!!!"

Reacting quickly (thank goodness), the Pres was able to unlock the moving truck with his key while running along side, open the door and hurl himself in, and hit the brake just as the truck hit the fence! 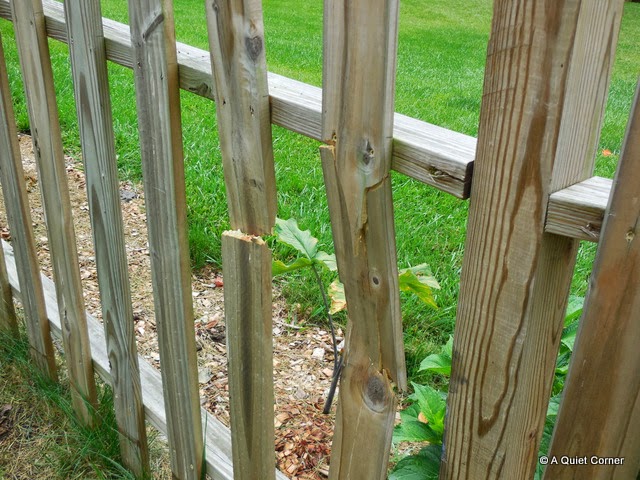 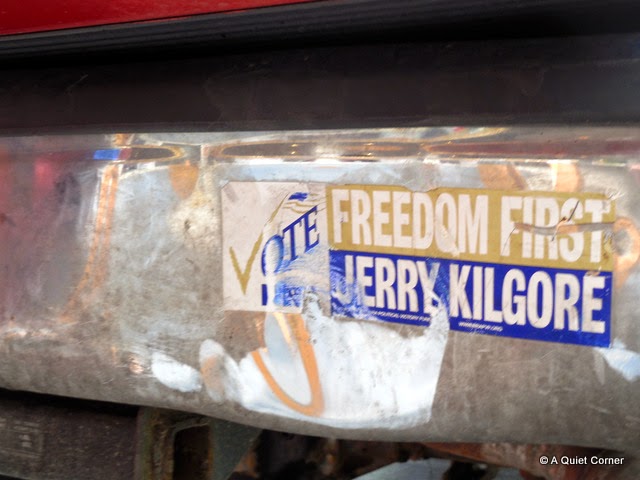 Sure, there are a few cracked fence posts.  Sure the truck's rear bumper was dented.  But the Pres came out of it unscathed...thank goodness!!

How about you?  Any close mishaps lately?

MadSnapper said…
ditto the OY VEY... so glad this had a happy ending, while reading this my WHAT IFFER went into full what if mode... does a 1 and 1/2 inch slice from a radio control plane propeller count? he needed about 10 stitches that went from knuckle down to finger nail laid open 5 days ago. he refused ER and wrapped tape around it.
August 7, 2014 at 10:00 AM

Ginny Hartzler said…
Oh my gosh, what a close call!!!! I am so glad he is alright!! What a scary thing to happen. Well, let's see. Phil broke my foot a couple months ago by dropping a heavy chair footrest on it. Just when it healed, he broke his own toes. We need to wear steel plated shoes!
August 7, 2014 at 2:19 PM

Judith @ Lavender Cottage said…
Oh my, this could have had a different ending and I'm glad your hubby didn't get hurt.
No close shaves for me lately...touch wood!
August 7, 2014 at 4:45 PM

eileeninmd said…
Oh my, that is a scary mishap.. I am glad Hubby was ok and everything but your fence was fine.. Have a great evening.
August 7, 2014 at 5:53 PM

doodles n daydreams said…
Great save by the Pres. And no lasting damage done either.

Beatrice P. Boyd said…
No mishaps to match this one, JP, and glad to read the only damages were to the fence and bumper. Pat just had all the brake lines replaced in his Jeep Comanche truck which he plans to sell, but it would have been unsafe if not fixed first. Guess Joe will be doing a brake repair too?
August 8, 2014 at 6:58 AM

BumbleVee said…
Well, I did a stupid thing too the other day ...and I said more then "Oy Vey!"

Drove the Rav too close to the broom leaning on the garage wall.. backed up a bit turned the wheels a bit, and, then... instead of putting it in Park...put it in Drive and forward it lurched.... hit the vice handle and the work bench hard enough to move things and, get a bright blue scuff of paint plus a scrape on the bumper before I jumped on the brake, swore and put it in Park.... whew... glad I didn't also press on any gas when it wasn't in Park... arrrghhhhh ....