Well, I figured that if he was going to get annoyed, I might as well tackle it myself. The downstairs toilet hadn't been flushing right which I told him about. He'd taken off the lid cover and adjusted the float, but it didn't resolve the issue. So....

I shut off the incoming water, got a big bucket and disconnected the flex hose from the tank. Watching it drain slowly into the bucket, I then turned on the incoming water. The toilet had been taking forever to fill after flushing it and I hoped that I could perhaps clear the line.

The water was flowing so slowly, I knew I was on to something. Shutting off the incoming water valve again, I unscrewed the flex line at that joint. However, in removing the hose, I noticed something protruding from the flex hose. Using tweezers to pull it out...first one, then a second, and then a third.  I reattached the flex hose to the incoming valve then to the tank of the toilet and turned on the water.

Hitting the handle to flush, it was like music to my ears...a nice strong, powerful
SWISH

My problem was solved! What was taking three minutes to fill now took less than one!
Here's what was in the line...three stray wood chips!  When I showed and told the Pres, he said, "Honey you were right.  There was something wrong.  They have probably been in the pipe since they built the house...maybe from when they laid the pipe." 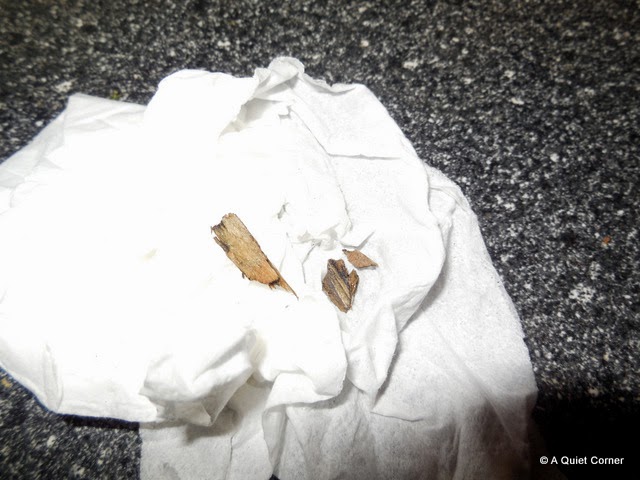 Did you guess where I found the strays?

Sandra said…
amazing story, the amazing part is you fixed it yourself. i am terrifed to touch the commode and would have no clue what to do even after reading this... no i did not guess where you found them. good job JP
August 15, 2014 at 7:13 AM

Monkeywrangler said…
Good job fixing the toilet! I find I too, am the family plumber. DH is the family electrician.
August 15, 2014 at 8:02 AM

Judith @ Lavender Cottage said…
Well, isn't that strange to find wood chips in the plumbing works. I would never had guessed you found them there JP. I'm impressed that you took everything apart yourself to solve the problem.
August 15, 2014 at 9:11 AM

Linda said…
Actually, I am not surprised at all. In our renos, remodelings, and buildings, our contractors have neglected to clear all kinds of pipes. One even sealed up an exhaust vent pipe! Glad you were able to fix your problem. And, no, I never would have guessed where you found the wood chips. Linda@Wetcreek Blog
August 15, 2014 at 12:08 PM

Ginny Hartzler said…
Holy Cow!!! I never in the world would have guessed!! You could be a professional plumber! Around here, the plumbers come and have to go out back to the lines, they usually find feminine pads in other people's drains!!! Don't look at me, I have passed menopause for years!!
August 15, 2014 at 12:59 PM

diane said…
Who would have thought????
That's funny ... thanks for giving me a good laugh.

GranthamLynn said…
That is weird. How could they have gotten there? Wow that you could manage to fix it. I might have tried in my younger days but not sure! Your a brave woman!
Thanks for coming by and see my fences at the FW Stock Yards. And yes I am counting the days till Labor Day.
August 15, 2014 at 5:56 PM

Barb said…
I'm calling you next time I have a plumbing problem. My husband is good at fixing, but for plumbing, I usually call the plumber.
August 15, 2014 at 9:29 PM

Ann said…
I never would have guessed where you found those. I know what it's like trying to get a man to do a job he doesn't want to do though....lol
Good for you getting the problem solved.
August 17, 2014 at 7:40 AM