Considering we live in the "Quiet Corner," this week was filled with activity.  Monday morning while I was outside with Moon and Copper, there was an entire conversation going on with the eagles.  Judging from the locations of the high pitched chirping, the adults were going on about something interrupted occasionally by the immature.

Fast forward to my return trip from the gym and there high in the sky riding a thermal was one of the adults.  But that wasn't the end.  Later that day, while we were outside on the deck, this handsome hawk showed up...after being chastised by the eagles. 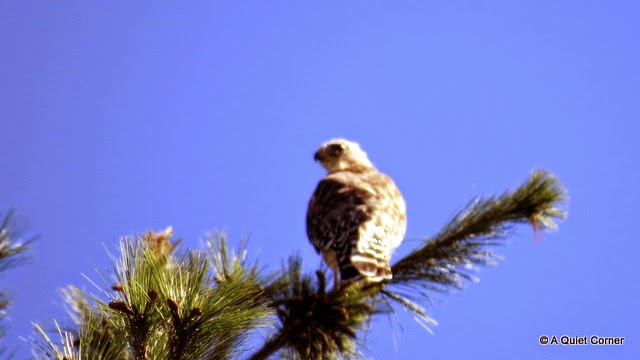 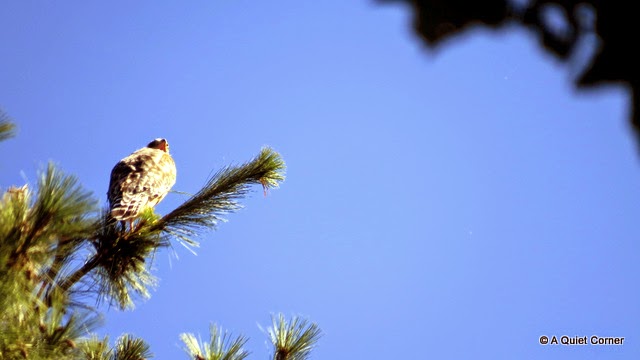 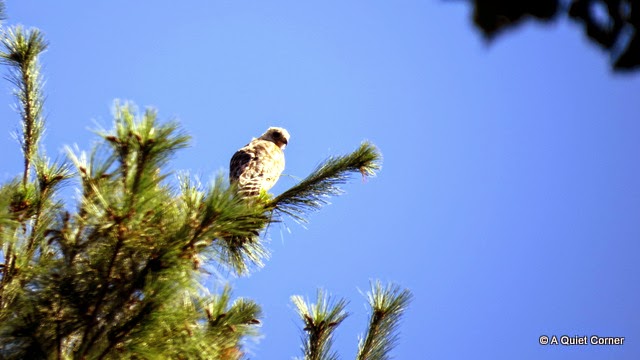 We think he may have had plans to hit the feeders.  Sitting in the pine for a while, once he saw that we were not going anywhere, he spread his wings and moved on.

Ann said…
I had a hawk sitting in a tree in my back yard once. It was amazing to me how long they will sit and watch their surroundings.
September 17, 2014 at 7:24 AM

Anonymous said…
It seemed to me that this year there was an increase in the hawk and turkey vulture population.
September 17, 2014 at 8:30 AM

Buttons Thoughts said…
Oh I love the movie you get to enjoy everyday. Awesome shots. Hug B
September 17, 2014 at 8:41 AM

Ginny Hartzler said…
The sky is so brilliant and beautiful! What is the difference between an eagle and a hawk anyway?
September 17, 2014 at 4:44 PM

Ginny Hartzler said…
I just looked it up. Eagles are bigger, stronger, and more powerful than hawks.
September 17, 2014 at 4:50 PM

eileeninmd said…
I am sure the eagles would win in a battle with a hawk! It would be interesting to watch though.. Great photos, enjoy your day!
September 17, 2014 at 5:06 PM