Turning onto our gravel road, I wondered whether the crew would be there today to erect the forms needed so the concrete could be poured for the foundation. Approaching the driveway, I saw a pickup parked off to the side, then a trailer holding the concrete forms.
And there, off to the side, was the Pres who waved as I turned in. Stopping the car and rolling down the window, I saw something that I just couldn't stop admiring.   Mesmerized by his demeanor and beauty, I just couldn't take my eyes off of him.  His huge brown eyes met mine and we seemed locked. 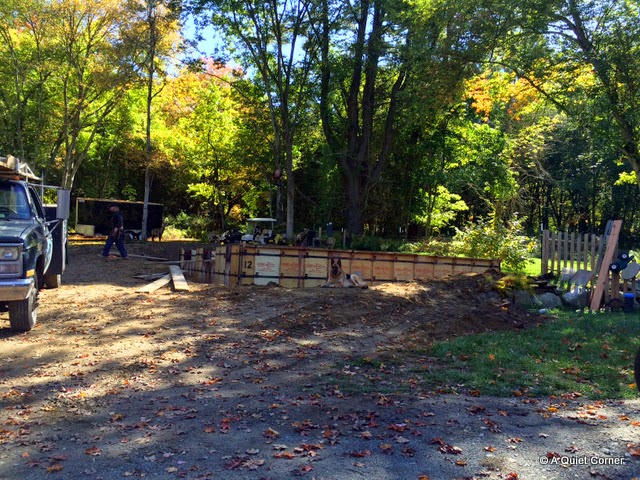 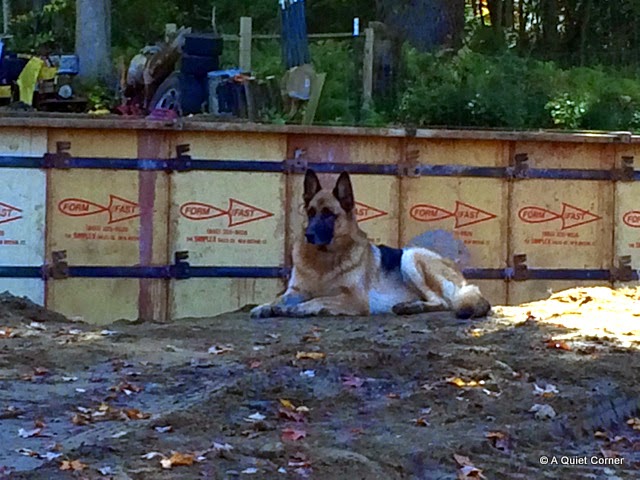 Meet Ned, a one hundred and thirty pound German Shepherd who chases rocks. He begs you to throw one and once he's got it, he returns to your side, lies down and sets the rock between his paws which are outstretched in front of him. Then he stares....and stares....and stares at the rock, whining occasionally as if to say...

Have you met any interesting critters lately?

valerietilsten59.blogspot.com said…
Once your eyes are locked to a dogs..he's your companion forever..
He is a beautiful german shepherd..
I wish you all the best with Ned.
He looks very happy JP..
happy saturday..
Val.
I am always busy with my 5 dogs. and the horses.
I would love to have more..but very time consuming.

~Kim at Golden Pines~ said…
He really is a handsome boy, I'd throw him a treat instead of a rock! I wonder how many he's accidentally eaten? :-) I've not met any interesting critters lately. I think I'm due!
October 11, 2014 at 9:57 AM

eileeninmd said…
He is a handsome dog.. It is cute he plays fetch with rocks.. Thanks in advance for sharing your post with my critter party.. Happy weekend!
October 11, 2014 at 11:17 AM

Ginny Hartzler said…
How CUTE!!!Looks like he wants a playmate. My cats are pretty unusual, one of them has anxiety.
October 11, 2014 at 1:25 PM

Bee Lady said…
Yes I just met Ned and he is an interesting and adorable creature!

Ann said…
He is a very handsome looking dog. Wade would love to have another German Shepherd but we just don't have enough room for a dog that big to run.
October 12, 2014 at 6:23 AM

EG CameraGirl said…
Ned sounds like a sweetie. And a one-of-a-kind! I don't know any other dogs that chases rocks and then protects them with his paws.
October 13, 2014 at 10:02 AM