Tossing and turning almost all night, it was last Friday night's phone call from my daughter that kept me awake.   The next morning when my cell rang, I had a sinking feeling. Through her sobbing and crying, I heard, " Mom, I am so sorry....I feel so selfish. C.A.T (pronounced See A Tee) is sick again. He's not eating or drinking, not going to the bathroom. All he does is lay in the closet.  We're bringing him to the Vet first thing this morning."

Needless to say, the Disney trip was cancelled last minute, several hours before we were slated to leave.  My daughter felt guilty for days.   "We'll reschedule. Go, do what you need to for C.A.T to make him comfortable.  I just wish I could take away your pain".

There was no hesitation in my words nor in those of the Pres. 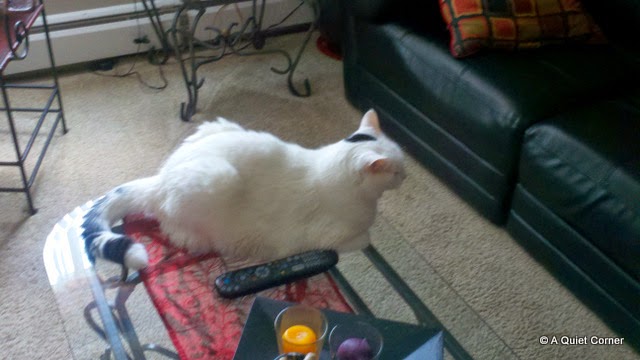 Although aching for them if they had to make the decision to put him down, I think I unpacked immediately just for something to do, as they rushed their beloved C..A.T, now thirteen, to the Vet.

They had adopted the two brothers from a litter at my Vet's.  Had it really been so long ago?  Naming one D.O.G (pronounced Dee O Gee) and the other C.AT, the two brothers were given a wonderful home filled with love and attention.  While D.O.G was mostly black and passed away a few years ago, the sixteen pound, mostly white, C.A.T., was soon introduced to Choo-Choo, a kitten they saved from a garbage dumpster.

He was given pain medication, given fluids under the skin and spent hours at the Vets on Saturday only to show no sign of improvement on Monday morning. They returned to the Vet Monday morning where more bloodwork and an ultrasound were done to determine the severity. Although his bloodwork was great, he was diagnosed with pancreatitis.

He came home Monday night...late and they were instructed to keep him on a bland diet, giving him pain meds as needed. When my daughter and Angel opened the kitty carrier, he stepped out, walked over to his food bowl and began eating his new food.  Tail up and waving as always, the big guy was as happy as they were to be home.

As of this post, he seems to be back to his old self, parading around, purring, meowing, napping, jumping on their king size bed (with the help of the ottoman to reduce effort) and just enjoying "going nowhere."

And Disney?
As the Pres said,"It isn't going anywhere."

Pamela Gordon said…
I hope all will be well with CAT. Critters are pretty amazing at comebacks.
October 24, 2014 at 5:31 PM

eileeninmd said…
I am sorry your trip was canceled. I am glad to read the good news on CAT.. So happy he is recovering.. And yes, Disney will always be there.. Enjoy your weekend!
October 24, 2014 at 7:01 PM

Anonymous said…
I am so happy that C.A.T. is feeling better. I hope it continues. Fluids often perk them up and jumpstart them. Yea! Wishing him the very best!
October 24, 2014 at 8:22 PM

Judith @ Lavender Cottage said…
A shame your trip was cancelled but there will be another time. Good news that the cat came home feeling better.
October 24, 2014 at 8:52 PM

Empty Nester said…
Oh gosh, so glad he is feeling better. I was dreading the end of this post Grateful for a happy ending.
October 26, 2014 at 10:22 AM

~Kim at Golden Pines~ said…
Still playing catch up on blogs, and came to this post that I didn't see on my last visit. I hope that your "grand-cat" continues to be well. and the Pres is right about Disney. Would you believe my sister in law has worked there for 30 years and we've never gone...And we could get in for free...And have a place to stay.. What is wrong with us? ;-)
October 26, 2014 at 8:47 PM