When I woke from my afternoon nap, I told the Pres I was heading outside to trim some of the spent ferns and perennials.  Meeting me outside with his weed eater, he dove into them while I used my larger clippers on plants along the wall.  After filling the wheelbarrow several times, it was time to take a little break.

Sitting in the rocking chairs on the patio facing West, I looked up and said, "Naturally, the cameras are both in the house upstairs and the immature is flying over."  I headed in to get the camera anyway knowing that he would be gone when I returned because that always happens.

Sitting down next to the Pres, there he was still soaring effortlessly high above our yard.  I got a shot or two...fuzzy but they will do.

And then we couldn't believe our eyes as another immature soared in from the Northwest, and another, and another and another and another until THERE WERE TWENTY TWO (maybe TWENTY FOUR, said the Pres) birds circling our yard...our space...OUR WORLD!  Yes, there were a few eagles in the group but the majority were turkey vultures, flying and soaring together!

We watched in awe and I even lay on the ground so my head would stop spinning from trying to track them with the camera!  "Honey, count them.  Honey, am I seeing things?"

I kept hearing him say, "I'm trying to count them all....I can't believe what we're seeing!" 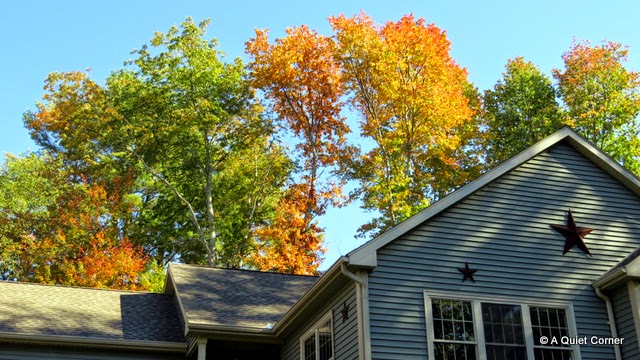 Today beside writing this post, I reached out to Kate at DEEP, Division of Wildlife for help in understanding what we saw.   Birding is great, isn't' it?

I know we will never see it again in our lifetime.

valerietilsten59.blogspot.com said…
What an amazing sight to behold JP.
Maybe once in a lifetime.
Do you think there could have been some dead wild animal that they had seen! I dont know anything about this bird.!
So glad that you caught them on camera.
super shots.
happy week val x
October 22, 2014 at 6:39 AM

Buttons Thoughts said…
Oh I have seen the Turkey Vultures soar in mass numbers and it is amazing and you have Eagles with them is very special. I would love to see that. Beautiful. Hug B
October 22, 2014 at 6:48 AM

Pamela Gordon said…
That's exciting to see. We have lots of TV's here too but I haven't seen many this summer although I know they are around. We saw a dozen one afternoon circling overhead. By the time I got my camera they were gone. Great shot!
October 22, 2014 at 7:35 AM

Anonymous said…
We've had an amazing amount of Turkey Vultures in our area this past summer and now into the fall...right in the city....we sit in Tims and watch them through the windows soaring and circling over the park and apartment buildings and businesses. Just amazing. Lots of hawks as well. You had yourself quite the gift from the universe...you must be on a flight path.
October 22, 2014 at 7:48 AM

Linda said…
Turkey Vultures? Oh, I have seen those, too. But never with eagles. At least I don 't think so. But we have wild turkeys out in the pine forests. Guess it is time to buy that bird book. At least I can identify cardinals and hummingbirds ;) Linda@Wetcreek Blog
October 22, 2014 at 7:58 AM

Bee Lady said…
We see them quite often out here, but I don't believe I've see that many at once. A couple of days ago, I was driving through town, where I used to live, and there was one eating something on the street and did not move when I drove up to it! Huge bird close up. I don't know why I didn't think to get a picture. Probably because I had two 11 year old children in the car with me.....

Ginny Hartzler said…
Wow, mysterious and awesome! What do you make of it? Please let us know if you find out. Maybe they were young birds trying to pick up the thermals? Your house with the trees behind is so beautiful!
October 22, 2014 at 1:22 PM

Inger said…
That is something to see, isn't it? And how great you captured them. They fly through out pass here in the tens of thousands, not sure how many, every October. I have to remember to bring my camera when I go to town. You really inspired me and I have felt so uninspired lately. I love your fall foliage, is it just gorgeous.
October 22, 2014 at 1:28 PM

Margaret Birding For Pleasure said…
That was an amazing sight for you to see and experience.love the fall colours.
October 22, 2014 at 3:23 PM

Sylvia said…
Love those fall trees,great experience with those birds. I love to see the Canadian geese fly over, the sound they make is beautiful.
"Came over from Outdoor Wednesday."
October 22, 2014 at 3:52 PM

mick said…
That must have been awesome to see so many soaring right over your place. I like the idea of lying on your back in the grass to watch them!
October 22, 2014 at 4:46 PM

eileeninmd said…
It is exciting to see the kettles of hawks and vultures.. Cool photo. Your trees are gorgeous, lovely colors..
October 22, 2014 at 4:58 PM

Ann said…
wow, how awesome. I didn't know all that about Turkey vultures. The only thing I knew about them was that they were pretty ugly :)
October 22, 2014 at 6:51 PM

Anonymous said…
What a great post! I loved the shot of the tree line with it's changing colors behind your home as well!!! The light was perfect and the sky so blue!!! TFS
Hugs,
Beth P
October 22, 2014 at 6:51 PM

Blondie's Journal said…
JP...you made me smile when you wrote that you laid in the grass to get your pictures. I feel your excitement. I wonder why this occurred? I'm not sure I would recognize a turkey vulture in flight that high, I see them fleeing from carcasses on the road but never noticed them flying. Very interesting creatures, aren't they?

Thanks for your good wishes. Yes, let's bring on the next operation and then move on to holiday fun! :)

Susan said…
What a great experience, JP! Interesting tidbits of info you posted about the turkey vultures. The fall colors are beautiful- our trees haven't starting turning yet.
October 22, 2014 at 9:17 PM

Rambling Woods said…
Isn't that amazing? I have seen it once here and it brought people out to their yards looking up. A happy shared experience... Awe..pure awe... Michelle
October 23, 2014 at 10:25 PM

Jen said…
The hawks and raptors are migrating this time of year. That's maybe what you witnessed. When the morning air begins to warm, they ride the thermals up into the sky.
October 24, 2014 at 11:00 PM