It's NOT A Cabana

Snapping pix of the garage as it progressed, I shared a few on FB for friends and family to see.  One of my recent posts drew the attention of my SIL and that of a former colleague from "the bank".

While my favorite SIL was happy for Honey in his endeavor and commented "it is coming along nicely," Gary, a good friend who always threatened to date my daughter, said, "I like the handyman or should I say cabana boy, JP?" 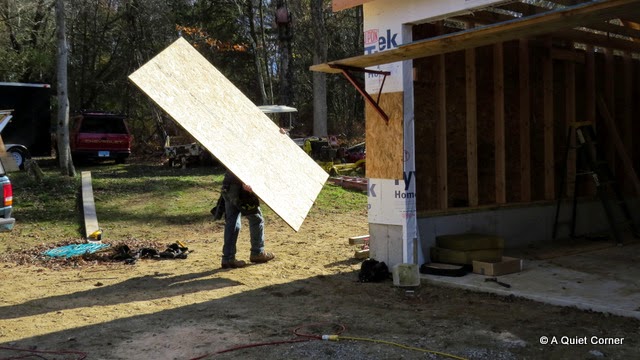 Behind that piece of plywood walks Matt around the the side of the garage.  After telling him how he made all the girls swoon, I asked him ti give me a wave to make them jealous. 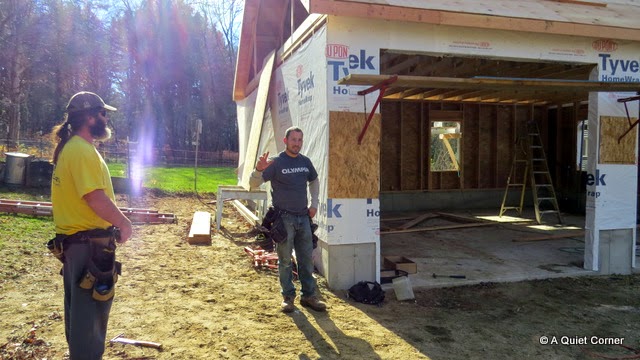 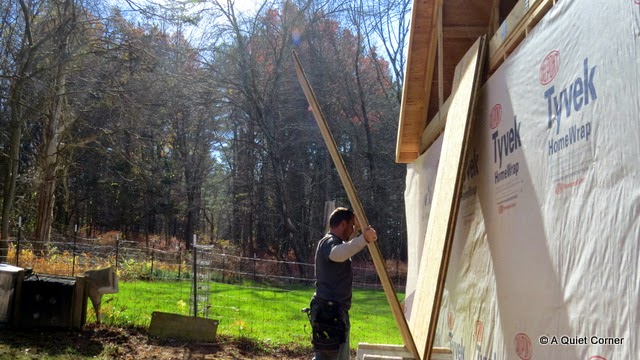 Now, every time I go outside for a pic, Matt asks me a if I have his "good side" and we all chuckle.  Quite truthfully between OS (Other Son, Corey) and Matt, I haven't decided which one is cuter.  However I do know one thing...they love to eat at coffee break.

Monday they had Raspberry Danish and a Spinach & Bacon Quiche and Chocolate Chip Bars.

Tuesday's treats were Blueberry Tea Cake (courtesy of Roberta Benoit), Chocolate Pumpkin Muffins (courtesy of Stephanie Meserve) and another quiche because they all loved it so much, they wanted a second one! 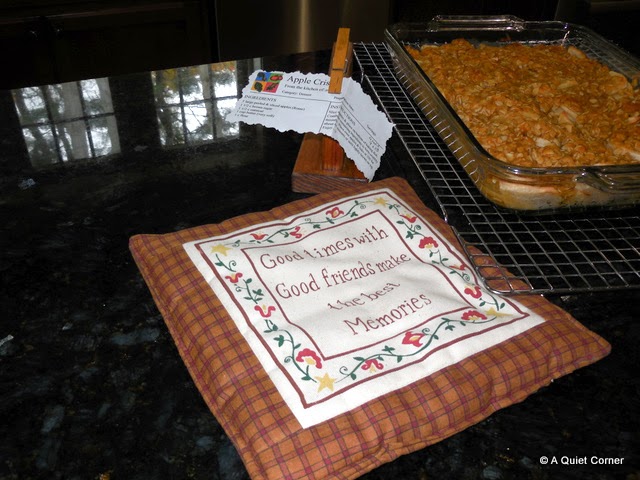 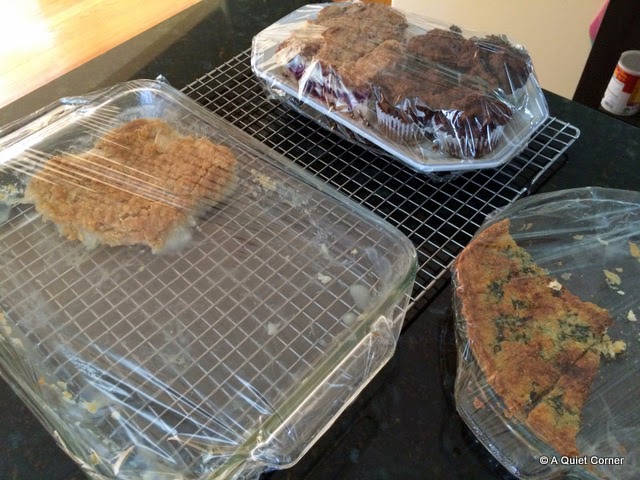 Wednesday I made them Apple Crisp (courtesy of Cathy Roosa) and Oatmeal Raisin Bars for their morning break and in the afternoon, they ate leftovers.


Thursday I made them Whole Grain Blueberry Muffins and Orange Cranberry Muffins which I served with hot cocoa and whipped cream...because it was chilly.  (These recipes came from the Cupcake Book I won in a giveaway last year!) 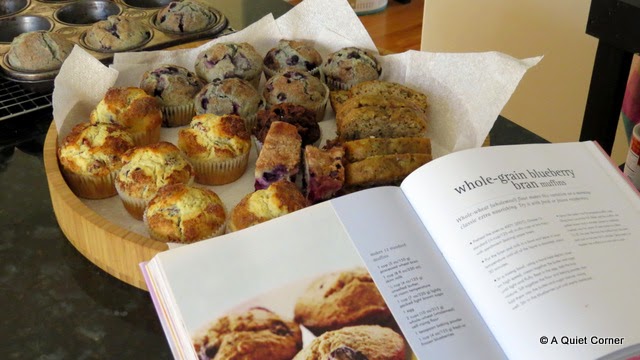 Meanwhile the "cabana" progressed nicely and the Pres enjoyed working right along side the boys which meant he too got a coffee break! 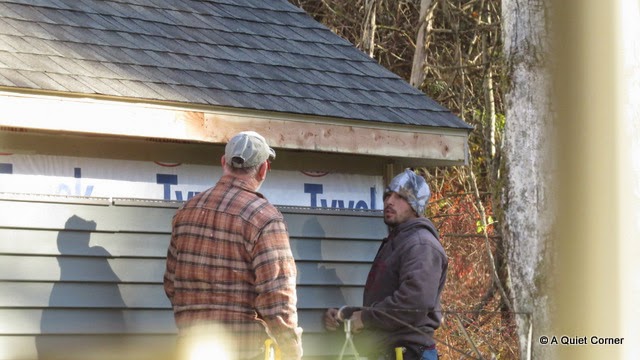 Although this is zoomed, I love looking out the kitchen window and being able to see the shadows dance on the rear wall. 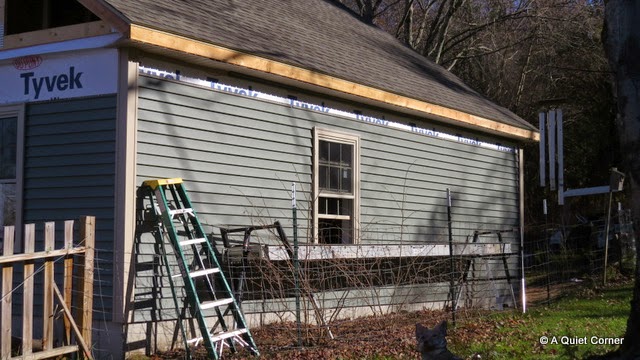 The Sour Cream Pound Cake (courtesy of Margaret Bess) should be a big hit...it always is!  Making it over the weekend, I was trying to plan ahead for Monday. 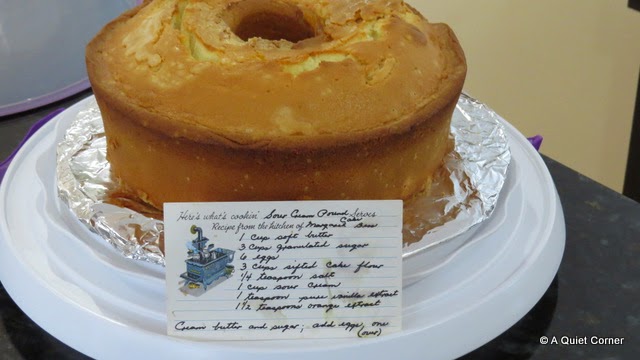 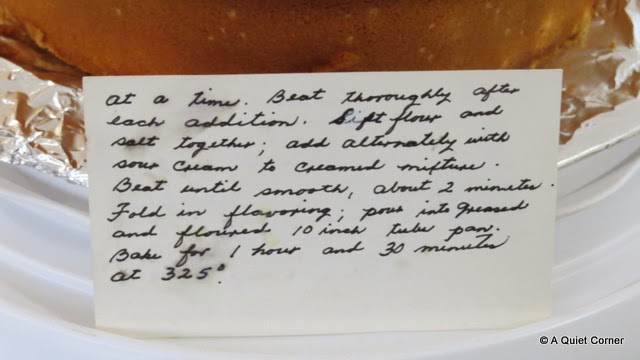 But it rained hard all day Monday so I was ahead of the game since they didn't work.

Making a huge Carrot Cake (courtesy of yet another friend, Louise Mason), I'll ice it later in the week because I'm making a recipe yet another friend tried and loved. That will be their Tuesday snack..some sort of breakfast bake...yum! 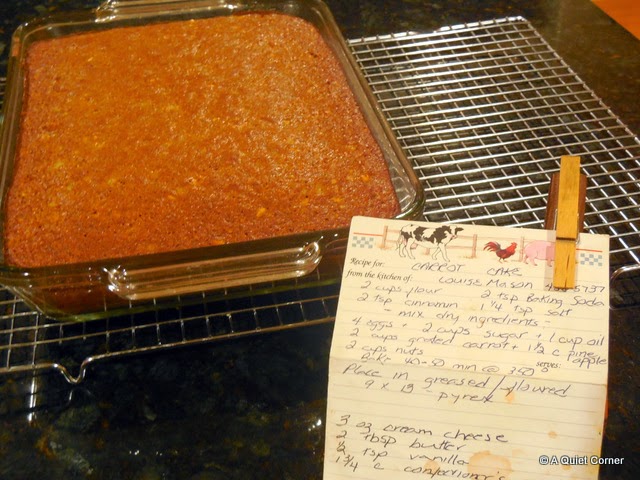 Did I tell you I'm not making thousands of cookies this year?

Pamela Gordon said…
Wow, that certainly is a well-fed crew! You are really spoiling them. The garage is looking great though. Enjoy the weekend.
November 21, 2014 at 6:18 PM

~Kim at Golden Pines~ said…
I agree with everyone else, you really do have a well fed and cared for crew, which I know is appreciated and enjoyed! And I'll confess that I thought I was doing good just offering a crew at our house something to drink! :-)
November 21, 2014 at 7:35 PM

Linda said…
JP, you are ruining it for the rest of us! Sorry to be a Scrooge, but what the workmen around here charge, they should be bringing me cakes! But I think your crew deserve your baking gems! Linda@Wetcreek Blog
November 21, 2014 at 8:03 PM

Ann said…
Those guys must love doing work at your house with all the goodies you feed them. Bet they don't get that kind of treatment on other jobs
November 21, 2014 at 8:36 PM

Wsprsweetly Of Cottages said…
My gosh, but that looks good. Oh, and I'm not making a thousand cookies either. Not even half a thousand...none to be exact. Gifts..I dunno...I have to think but I know for sure I do not feel like baking!! :) I'm..trying to slid through this year, as easily as I can.
:)Hugs,
Mona
November 22, 2014 at 12:30 AM

Anonymous said…
There will be no shortage of contractors willing to work at your place.
November 22, 2014 at 4:57 AM

valerietilsten59.blogspot.com said…
Happy fed workers, make for good "Cabana"
I think you will have to call it your Cabana JP.
How wonderful that your boys help too.
I am waving back to Matt.!
The garage project is really taking place.. Its big.
It will look great once finished.
All those lovely cakes and and deserts ..they look so inviting.
Wishing you a happy weekend and happy baking for your crew.
val xx
November 22, 2014 at 8:22 AM

Florida Farm Girl said…
Holy cow!! Those boys are gonna work til Easter if you feed them like that every day!!

Beatrice P. Boyd said…
Reading this post and seeing those wonderful treats would make anyone want to help with the garage project. Coffee break times are definitely special times, JP. And, I must have missed the post about NOT baking all those holiday cookies, but obviously you are still baking.
November 23, 2014 at 7:05 AM