I've been thinking about this for a while now and I just have to get it out. Not all the blogs I follow show up on Bloglovin and not all show up on Feedly. However, I seem to be duplicating my efforts going from one reader then another. Then there's Blogger. Definitely not as aesthetically appealing yet everyone is there.

However I do not like the problems that occur with Blogger so I am contemplating a move to WordPress. So any WordPress people out there any feedback would certainly be appreciated. I figured that the Winter months would be the ideal time to set up a new blog since I have more time.

Having what I thought were problems with my laptop, then the iPad, I found it more frustrating than rewarding lately. So after much angst (to say the least), I finally figured out it was our wireless provider...although nothing was wrong" whenever I called.

Meanwhile the Pres called the 1-800 number on a Saturday after one of his channels stopped working and reported several other channels out as well and with today's technology they reset the cable box while Honey was on the phone. After she reset the box, NOTHING WORKED...including my wireless!

The Pres is addicted to television so needless to say, he was NOT happy.
He was told that a technician would be by on Sunday...yep...Sunday because the Pres kept saying, "So you fried my box and now we're without cable and internet...well, that is lousy customer service, don't you think?"

Sunday rolled around rather slowly because all we could watch were programs he'd recorded on the DVR...programs like Meet the Press and 60 Minutes!

The technician informed us that the reason we'd been having difficulty is because we had a lousy signal...a lousy signal caused by an incorrect type of cable installed by the last technician along with the incorrect number of feeds (whatever that meant!).
Well, when he went to rerun new cable, he showed us where something had severed part of the cable even though it is underground and housed in the conduit!!

Have a Happy Thanksgiving! 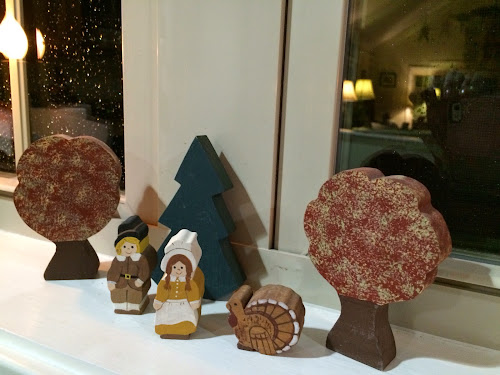 We will.
We have a LOT to be thankful for...
beside cable and internet...that is.

eileeninmd said…
I hope your internet problems are solved soon! Happy Thanksgiving to you and your family!
November 27, 2014 at 7:35 AM

Judith @ Lavender Cottage said…
Happy Thanksgiving JP.
We've been through similar situations with our internet, cables etc. One year when the cable had to be repaired underground outside they cut the phone line by accident. Well, when Bell Canada came to repair theirs, they accidentally on purpose cut the cable line. How mature was that!
On the whole Rogers cable (no relation) is good at coming quickly and offering monetary compensation.
I understand it's a big move to Wordpress but if it works out, those bloggers are happy.
November 27, 2014 at 8:30 AM

Anonymous said…
Happy Thanksgiving and please please please don't go to Wordpress. I have never been able to comment on Wordpress blogs and I would miss you so much. I don't understand why you have the blogs you read listed under other things when blogger has a perfectly good reading list that accepts all the blogs you follow.
November 27, 2014 at 8:37 AM

Ann Thompson said…
we changed internet providers a while back because it was out more than it was working. Whenever we called them they told us nothing was wrong on their end and it had to have been a problem in our house. They would gladly send a technician but we would be charged for it. We said no way are we paying and cancelled them and went to someone else.

Sandra said…
so sorry to hear about the cable, life here is total chaos if the TV doesn't work, it is my Baby Bob Sitter. LOL
about changing to wordpress, that will not change how you view others blogs at all. and will cause mass confusion. i have all my blogs in feedly, you have to add them if they don't show up.
use blog dashboard to get your link and put them all in feedly. feedly is all i use and dashboard. if they don't show on dashboard add them there.
i have all the ones i follow on dashboard and feedly but only use dashboard if feedly is not working. if you like bloglovin you can add them there.
November 27, 2014 at 9:17 AM

TexWisGirl said…
amazing how dependent we get on internet and tv! :)

i use feedly as my main reader and use bloglovin as my back-up in case feedly is ever down. i add any new blogs i wish to read to feedly, then every now and then, i export an opml file from feedly and load it back into bloglovin so it syncs up to keep the exact same blog list in both places.

as for switching to wordpress, i have no personal experience but i do remember a couple of blogger folks switching then returning after having trouble with wp. not sure what.
November 27, 2014 at 10:26 AM

Ginny Hartzler said…
I love your cute wooden Thanksgiving set, it is so cute!!! I am glad it is fixed! But what could do this underground, a mole? Very strange! I have to add my two cents about your move. I do not like Wordpress! The pictures are very tiny and you have to click on them in order to even see them right. It is a drag to comment and see the pictures.
November 27, 2014 at 3:02 PM

Spare Parts and Pics said…
Don't get me started on cable companies! One of modern life's most frustrating areas. I often think of the "good old days" when TV was free and you just needed a good antenna. Have a Happy Thanksgiving.
November 27, 2014 at 4:40 PM

Rambling Woods said…
I went from blogger to Wordpress about 6 years ago...You can import your blog posts from Blogger into Wordpress while leaving your Blogger blog standing. It makes a copy in the new blog.. It involves exporting the blogger file and importing into Wordpress and can include even the comments...
November 27, 2014 at 10:20 PM