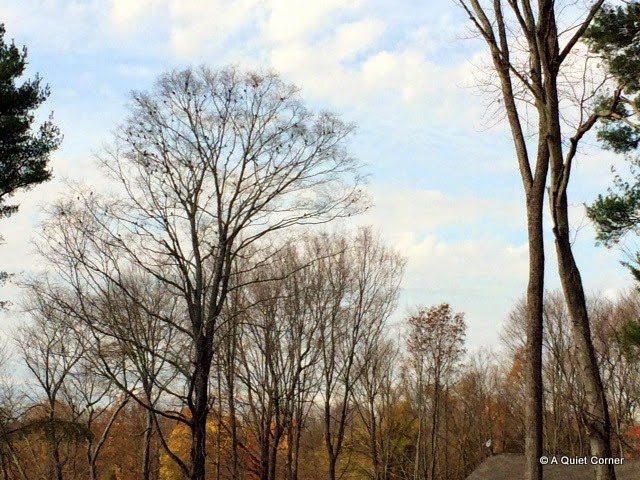 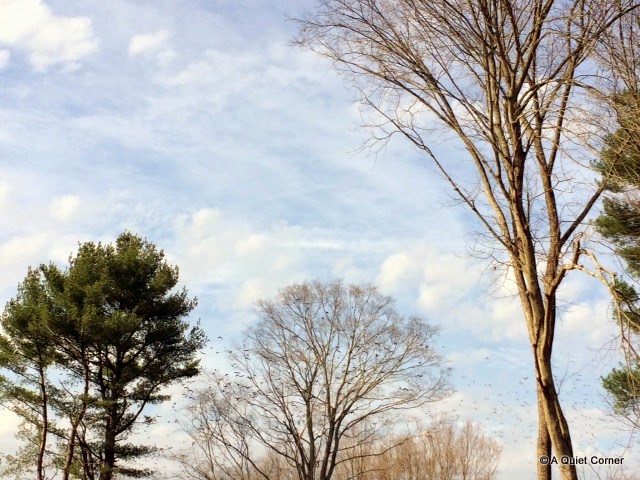 The latter part of the week found us working in the yard nearly every afternoon.  Working and observing the Starlings, which, I'll admit, have never been my favorite bird.
They have been flying in what seems to be a huge circle that encompasses our property along with some of our neighbors...about thirty acres.  And they fly periodically stopping occasionally...sometimes in the field near the pond, sometimes in our trees, sometimes in my neighbor's trees.  Each time I heard them, I would say to the Pres, "I want to know why they're doing this."

And I STILL wanted to know WHY as it's been going on for days now.
So I searched and found some pretty interesting stuff. 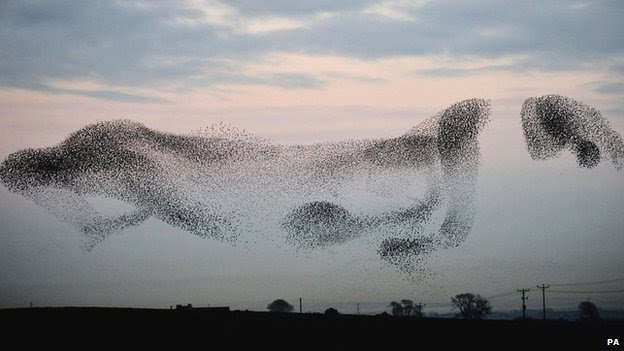 Murmurations can involve up to 50,000 birds or more
A starling murmuration is an extraordinary sight.
Seen at dusk the sky darkens as thousands of birds flock to form complex shapes overhead - the only sound the beating of thousands of pairs of wings and the soft spot of droppings meaning a visit to the car wash and an umbrella if you get up close.
I'll never forget the first time I filmed one, but for such an amazing natural spectacle we know surprisingly little about why they happen and what they are for.
For the most part it's mathematicians and physicists who have carried out most of the research looking at the patterns and practicalities of how thousands of birds avoid smashing into each other.
Simple survey

But there's a bit of a gap in our biological knowledge explaining why murmurations actually occur.
Now the University of Gloucestershire is appealing for our help in trying to reveal the secrets of the murmuration.
It's the sort of research that simply wasn't possible until a few years ago.
There's a simple online form that you can fill in on your smartphone while out watching a starling flock.
The more information they gather the more the researchers can start to understand what's going on


You enter time, date and location and then some extra information like the weather and even if there are predators nearby. The only proviso is if you see the same flock on several nights in a row then do fill out another, separate report.
Ballet of the skies

You can even make an estimate of the numbers of birds, although given murmurations can involve up to 50,000 birds or more the researchers know they won't be accurate to the last bird.
You can find the survey at www.surveymonkey.com/s/starlings
The more information they gather the more the researchers can start to understand what's going on.
Popular theories for murmurations suggest they are a way to confuse and avoid predators, a way to keep warm or just a massive signpost in the sky for a safe place to roost.
~~

Should I fill out the form?

MadSnapper said…
i find that most forms filled out on line are just there to get your email so they can bombard you ... this is an amazing sight and one i have never seen. of if i did i did not know what it was... the reason they do this is because God made them that way.
November 3, 2014 at 8:03 AM

Anonymous said…
It is an amazing sight for sure. I always thought they were just practicing for the long flight south.
November 3, 2014 at 9:40 AM

Bee Lady said…
Nah! I think you should spend your time trying to talk the spammer above into believing that American women are still nice! LOL! Girl...only you know how much time you have, but if you are questioning it, then I'd say no. Although I do enjoy learning about birds/nature. Let us know what The Pres finds out. You are right, waiting is hard.
November 3, 2014 at 12:00 PM

Bee Lady said…
Ooh nooo....you must have deleted spammer comment. Oh well...you know what my comment above was talking about!
November 3, 2014 at 12:01 PM

Ginny Hartzler said…
Yes, fill it out. Your photo is just wonderful, I have never been able to get one this clear! We have many starlings, and they do this in the evenings. They are getting ready to sleep and looking for a place to roost. But why they do it this way, I think still no one knows. Did you know they can be trained to speak really well?
November 3, 2014 at 1:15 PM

eileeninmd said…
It is an amazing sight to see. Awesome capture.. I do not think I would want all these birds on my property.. Have a happy week!
November 3, 2014 at 5:01 PM

Ann Thompson said…
amazing and fascinating. The wonders of nature
November 3, 2014 at 6:40 PM

Hannah said…
Starlings along with house sparrows are birds that ecologically speaking should have been left in Europe instead of ruining our ecosystem for our native songbirds. They used to try to nest in our roof soffit and would make a lot of noise and mess. The murmurations are amazing though, it looks like a pixilated painting.
November 6, 2014 at 4:39 PM