Well actually, it was a day and a half but I didn't like that as a title.

The boys showed up and began working on the garage frame Monday.  Somehow I knew that the Pres would not be able to sit and watch...LOL!

Taking the majority of these before I left for my granddaughter's, I knew they would get it done because the only break they took was when I brought out the trays of warm baked goodies.

When I pulled in the driveway Tuesday night, it was dark...too dark to really see much of anything so I waited until morning to take the picture in the lower right corner.

The roof is next. 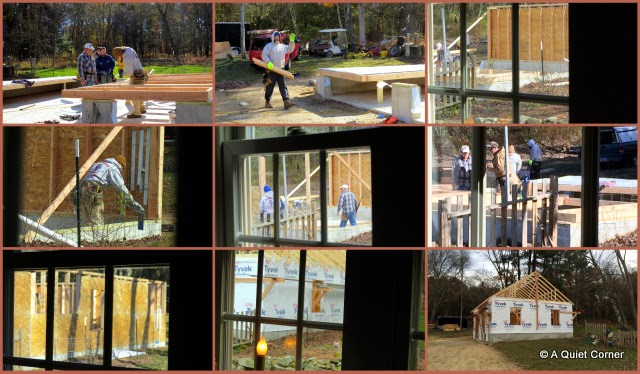 So do you think a nice raspberry filled danish would be a hit with them next week?

Ginny Hartzler said…
It is REALLY coming along. Is there a finish date? Maybe that is why they are working so well, your delicious treats!
November 9, 2014 at 11:40 AM

Judith @ Lavender Cottage said…
I hope your bruised head is getting better. The neon green wave in the top middle is cute and bottom right is showing how everything's coming together.
Raspberry danishes would be a big hit, be sure to save one for yourself.
November 9, 2014 at 8:45 PM

EG CameraGirl said…
Looks the work is progressing nicely! If the workers don't want the raspberry danish I'll be right over.
November 10, 2014 at 9:20 AM