Seek And You Shall Find 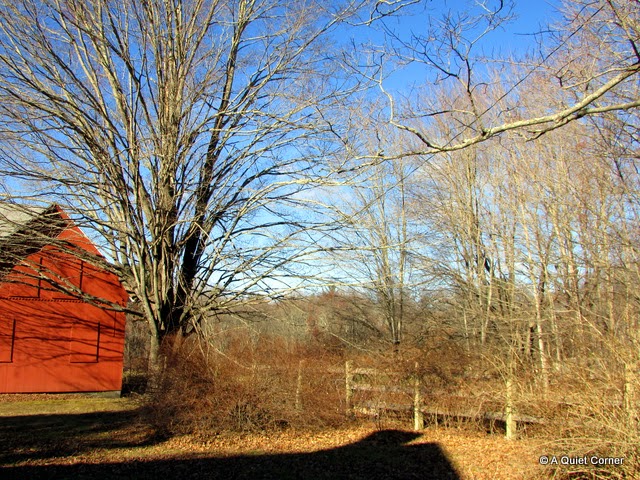 After dropping the Christmas cards at the post office the other morning, I decided to take a closer peak at this place. Not far from home, I pulled in and parked. Getting out of the car and looking to the right, I thought the shot above would make a pretty pic. That red barn among all the neutral brown tones surrounding it, let alone the fence, looked so appealing.

Then turning toward the left, I spotted this scene below and became intrigued. While it lacked the vibrancy of red, the moss on the roof added character, don't you think? It appeared to be a home with it's chimney still in tact and since it too had a fence, I was happy.

Just what I was looking for! 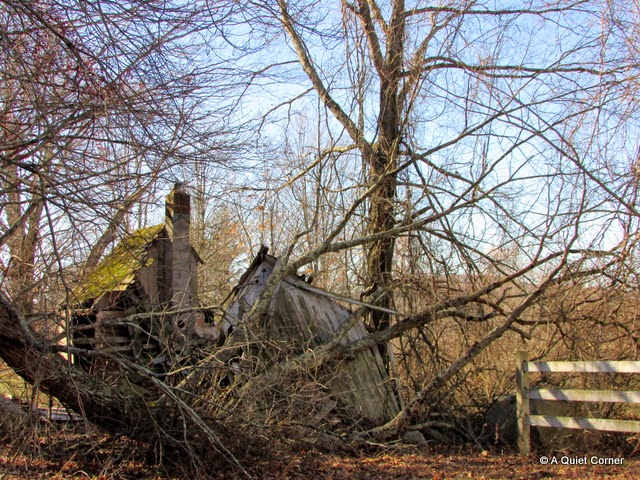 eileeninmd said…
The red barns are always a favorite of mine! Wonderful fence finds! Enjoy your Thursday!
December 18, 2014 at 7:09 AM

MadSnapper said…
the red barn shot is wonderful, so much texture with those beautiful trees and the fence... poor old house looks great to.
December 18, 2014 at 8:16 AM

Ginny Hartzler said…
I love your snow! And it is not just snow, it is pretty flakes! I do like the first picture. But the second one, WOW!! LOVE the moss! And it looks so tiny...or is that just the effect. I wonder how anyone could live in such a small place. I would have thought it is a large storage shed, except it even has a chimney! Maybe some day you can peek in the windows!! I would actually love to go with you if we lived close, an adventure! Except in these instances there is always a large dog involved who gets very vocal.
December 18, 2014 at 12:27 PM

Unknown said…
Both are just great pictures!
Can't make up my mind, so I love them both :))
【ツ】Knipsa

Margaret Birding For Pleasure said…
great fences and I love the red barn
December 18, 2014 at 4:47 PM

Ann Thompson said…
Barns always attract my attention. The red in this one does look nice with all those winter browns. I like the other scene too although it's sad that whatever it used to be was let go to deteriorate like that
December 18, 2014 at 5:14 PM