Sitting on the ab machine and chatting to Steph, who was using the back machine, we both smiled as Norm began to walk by.  Norm is a trip!  A retired Navy Medic and a fellow birder, he always has something interesting to say along with a joke of some sort.  And so it began.

"Guess what I did last week JP?  I rescued a Flicker. It flew into a window and when I picked it up, it looked at me soulfully, saying Please don't hurt me. I blew in it's beak and it came right around!  Then I let it go."

Since he had my attention as soon as he said the word, Flicker, I told him about the one I've been seeing. He then told me that as large a bird as they are, they will not bother the smaller birds at the feeders, like the pesky and bossy Blue Jays.

Heading home and seeing what you're about to see confirmed just what Norm had said...that the Northern Flicker is, in fact, a gentleman of sorts.

Enamored by Eastern Bluebirds, I could not stop watching them look up at the Flicker as if to say....Hey big guy...be a love and let some suet drop down here.

Whether accidently or intentionally, he did, reaffirming that this bird really is a gentleman! 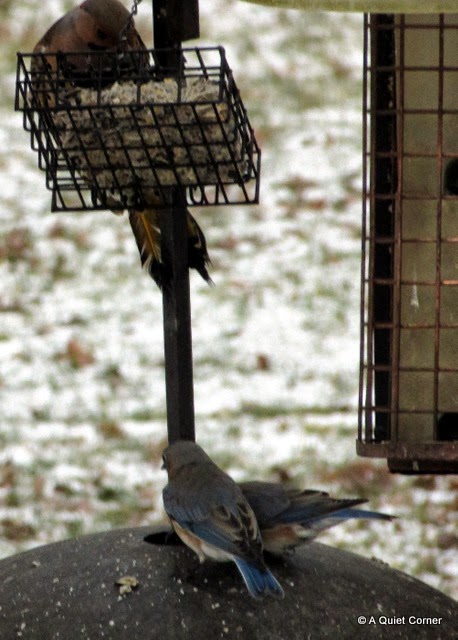 Sharing the gentleman with you and those at

So, who's the gentleman in your neck of the woods...Hmmmmmmm?
Email Post
Labels: Birds

Ann Thompson said…
OMG, that first picture is adorable with those two little ones looking up like that. What a great shot. It's a keeper
January 24, 2015 at 7:14 AM

laurak/ForestWalkArt :) said…
i agree with ann...LOVE that first shot!!
your friend Norm is certainly a dedicated 'birder'...giving the Flicker mouth to mouth...or beak to mouth!! :)

EG CameraGirl said…
How cool to have a flicker at your feeder. Looks like the bluebirds think so too.
January 24, 2015 at 8:22 AM

Anonymous said…
What an adorable picture. You should definitely submit that one to a 'bird' magazine.
January 24, 2015 at 8:52 AM

Florida Farm Girl said…
Now that's just plain sweet!! I see flickers here occasionally (once a family of 4 at one time!) but they've never come to the feeders.
January 24, 2015 at 10:46 AM

cedarmerefarm said…
The first photo is precious and amazing! You should submit it to a birding or wildlife magazine. Your friend is a true bird lover. Have a nice weekend JP.
January 24, 2015 at 11:01 AM

Chris K in Wisconsin said…
I agree with those above who said you should submit that photo to a birder magazine or site. I could see it as a poster with a clever saying under it!!! That is truly an amazing once in a lifetime shot!! LOVE it!!!!!!!!
January 24, 2015 at 12:40 PM

eileeninmd said…
That is really cute, what a sight to see! I love the bluebirds and the Flicker. Thank you for linking up and sharing your post! Have a happy weekend!
January 24, 2015 at 3:46 PM

Judith @ Lavender Cottage said…
Well, that's nice to know that they're a gentle bird as there's enough chasing at the bird feeders and other species could learn from them. I've even watched the downy and hairy woodpeckers being bossy with each other on the peanuts.
January 24, 2015 at 4:20 PM

Ginny Hartzler said…
Oh my gosh, how on earth did you get this picture? It is fabulous! One bluebird on each side, both looking up at him. Yes, the flickers are sweet birds. The Blue Jays can be horrid. I think that Norm would cheer up anyone!
January 24, 2015 at 5:21 PM

Anonymous said…
Lovely post. The picture is amazing, and your details are touching. Thank you.
January 24, 2015 at 9:19 PM

Beatrice P. Boyd said…
Wow, learned something new today and nice to see that there is also kindness in the bird world, JP. And, what a great photo opp to show it as well.
January 25, 2015 at 8:08 AM

MadSnapper said…
i have not met a gentleman in many years, not in birds or men. Our new dog Beau is a gentleman, we call him gentle giant
October 30, 2020 at 2:57 PM

David M. Gascoigne, said…
Great shot and an interesting combination of species. I have had flickers at my suet feeders, but never a bluebird, and I have even tried live mealworms. The robins sure had a feast though!
December 27, 2020 at 8:47 PM

Anni said…
Love reading this ... so positive & hopeful. Perhaps next year will top off & exceed. We can only wait & continue to wish for the best!

Beside a babbling brook... said…
And he is precious, too!!!!

Rather wren-like, to me.