No, not mine but rather the life of
a little fellow I met named Sprite.

First up was the most adorable little thing you could possibly imagine.  Making me melt and utter "Awwwwww, how adorable", right out loud in the crowded room, I couldn't believe how tiny it was.  I just wanted to tuck it inside my breast pocket and head for home! 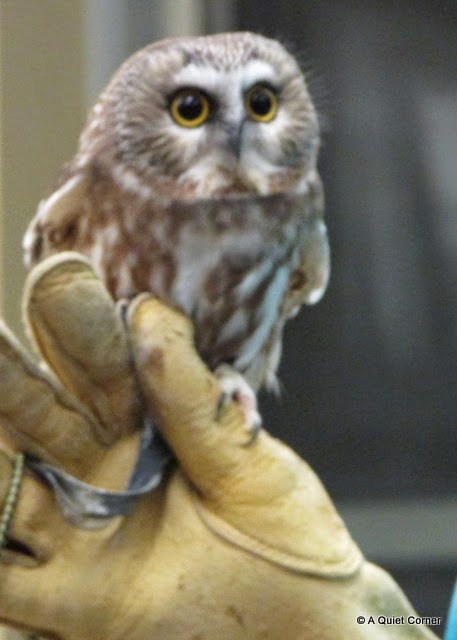 Can you see how tiny it is?  That is a woman's gloved hand holding it!!

Hit by a car, the driver pulled over to save it.  Yet before he could get to it, it was hit a again by another vehicle when it tried to fly!!

Suffering neurological damage, it would not be able to live a normal life so Sprite (named not for the soda but rather the definition which means a small illusive being, fairy, elf) is now an ambassador...an educational emissary...and lives at the aviary.

Bursting with attitude and known for it's golden eyes, this little guy is fierce and usually silent living in Northern North America's evergreen mountain forests and rarely ever seen. 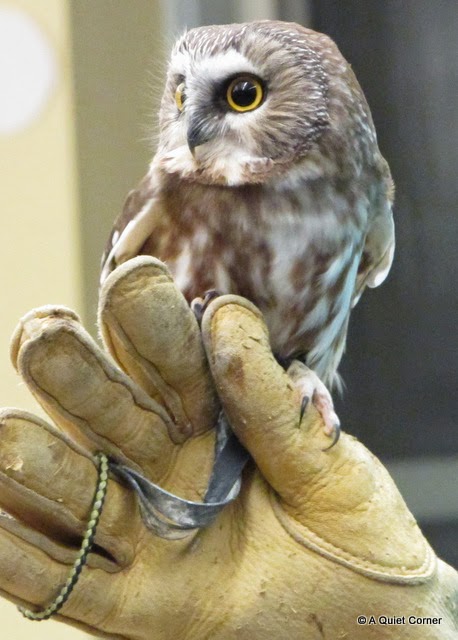 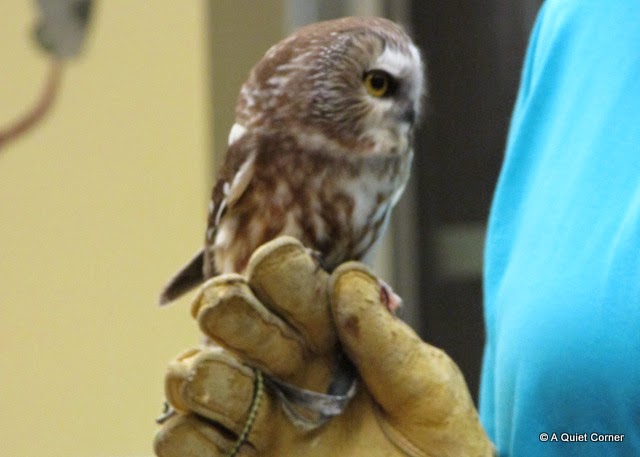 The presentation, by Horizon Wings Raptor Rehabilitation & Education Center. was held in Massachusetts.

I thought it would be worth the drive that night.

MadSnapper said…
we would have said awwwwwww out loud in unison if I were there.
our wildlife rescue came to the nursing home to do their educational show that they take to schools. a tiny owl the size of this one, but called a screech owl, was blind. boys had seen it in a tree and shot it in both eyes with paint ball guns. it was rescued and they were put on probation and made to go around with the show to explain why we should never aim guns at them. it was precious with no eyes and so sweeet
January 3, 2015 at 8:26 AM

Anonymous said…
What an adorable little guy and so sad that he had to suffer like that.
January 3, 2015 at 9:18 AM

eileeninmd said…
I like the cute name Sprite.. I am sorry it was hit by a car! I am glad it has a happy place to live now.. Great post and photos! Thank you for linking up and sharing your critter post.. Have a happy weekend!
January 3, 2015 at 12:47 PM

Linda said…
How cute! And how sad that he was hurt! Thanks for sharing his story with us. Have a great weekend! Linda@Wetcreek Blog
January 3, 2015 at 12:55 PM

Margaret Birding For Pleasure said…
Oh it is so ting and very cute. HAPPY NEW YEAR and have a wonderful weekend.
January 3, 2015 at 1:48 PM

Judith @ Lavender Cottage said…
A sweet little owl and sad that he was hit twice but at least has a forever caring home. I follow a bear sanctuary on FB that is north of us and they received a cub that had been hit by a car after being left for dead for over a day. A kind hearted soul saw that it was still alive but because of neurological damage as well, will live its life at the sanctuary.
You have to admire people that help animals/birds in distress and also the people that run the places where they can be taken.
January 3, 2015 at 4:57 PM

Ginny Hartzler said…
He is adorable! I think this is the smallest owl in the country? Hard to believe this little guy survived after being hit TWO times!! Wonderful pictures, he is cuter than a puppy even!!
January 3, 2015 at 6:25 PM

Anonymous said…
Lucky little Sprite. So glad he was saved and taken to the aviary. What an adorable ambassador for his species. It must have been thrilling to meet him up close.
January 3, 2015 at 7:03 PM

MTWaggin said…
What an adorable little guy and God bless those that stopped to save him as well as those who work so hard to rehab these exquisite creatures.
January 3, 2015 at 7:22 PM

My Little Home and Garden said…
Poor little thing. Sprite is such a beautiful creature.

Blondie's Journal said…
It makes me feel so warm inside to know that little Sprite was saved. She's precious, as are all of our creatures.

gld said…
Great pictures. How wonderful that it was rescued and now serves such a good purpose. I have never seen one before.
January 4, 2015 at 5:21 AM