Unsure of how I discovered Karen at Flamingo Ks Blogabout, I do want to share a recipe that she posted January 3 of the New Year.  Apparently I wasn't the only one who asked about this recipe when she mentioned it because a few days later, there it was for all of us who inquired! 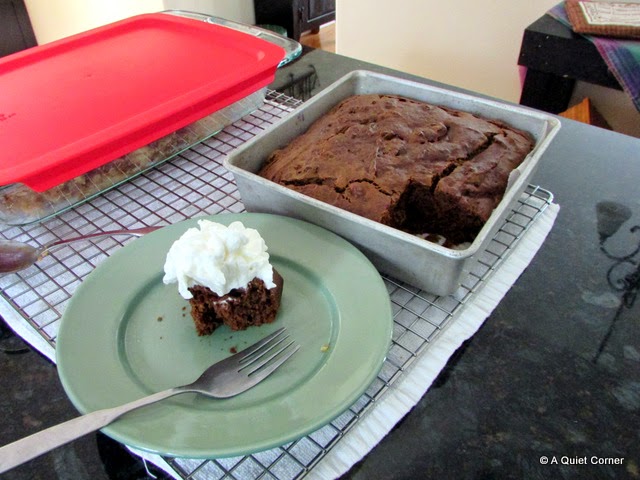 So, Karen, I just have to tell you how much the Pres and I enjoyed this cake.

"You guys asked for it, so here it is....The Ginger Cake Recipe.  Now this isn't the best cake I've had, but its a pretty darn good one.  The best I've tasted was from my Aunt Nellie who is no longer with us.

Nellie would top of your serving with a generous dollop of fresh whipped cream, but sometimes she'd flavor the cream with whiskey or brandy.  I just use whipping cream "straight up" -- lol.

I got this recipe from the Food Network, and the contributor, Ina Garten, is noted at the end of the recipe.  Let me know how it turns out for you!  Enjoy...


As Karen suggested, the Pres and I enjoyed ours topped with Whipped Cream but you may want to opt for icing:
1 cup confectioners' sugar, optional
2 tablespoons plus 1 teaspoon freshly squeezed orange juice

Preheat the oven to 350 degrees F. Grease an 8 by 8-inch cake pan and line with parchment paper. Grease and flour the pan.

Place the rum and raisins in a small pan, cover and heat until the rum boils. Turn off the heat and set aside. Place the butter and molasses in another small pan and bring to a boil over medium heat. Pour the mixture into the bowl of an electric mixer fitted with the paddle attachment. Cool for 5 minutes, then mix in the sour cream and orange zest.

Meanwhile, sift the flour, baking soda, ginger, cinnamon, cloves, and salt together in a small bowl. Mix with your hands until combined. With the mixer on low speed, slowly add the flour mixture to the molasses mixture and mix only until smooth. Drain the raisins and add them and crystallized ginger to the mixture with a spatula. Pour into the prepared pan and bake for about 35 minutes, until a toothpick comes out clean. Set aside to cool completely.

When the cake has cooled, whisk together the confectioners' sugar and orange juice and pour it onto the gingerbread, allowing it to drip down the sides. Allow the glaze to set. Cut the gingerbread into 9 squares.

MadSnapper said…
yum yum yummmm i saw your tunnel and remember that one and the beauitufl eagle in the tree.
January 9, 2015 at 2:59 PM