Yesterday morning, a few flurries began around 11:00am while the Pres was at work (another story). Meanwhile, our friend Luke had come by around 7:00 am to get an idea of where he would pile the snow from the gravel road and the three driveways (the two neighbors and ours) once the plowing began. Meanwhile, feeling the excitement building, I went in to make a cup of tea and put a big pan of lasagna in the oven so it would be ready when the Pres got home.   And then...


Starting Monday night, just as all the weathermen predicted, the snow fell. It fell rapidly and with great intensity. Yet we had prepared. Full and ready to go in case we lost power, the generator was the first thing the Pres checked the other day. Then, after hearing from the Pres' cousin, a meteorologist with the U.S. Weather Bureau, we battened down the hatches.


Today, of all days, we wanted to be sure the feeders were full with fresh peanut suet cakes hung in there regular spots to avoid confusion and that both insulated dog "condos" were accessible to the birds for shelter.  Lifting up the doggie-door flaps, I saw that the birds had already been using them when I spotted the bird residue they'd left behind.  Yes, they had ample shelter. 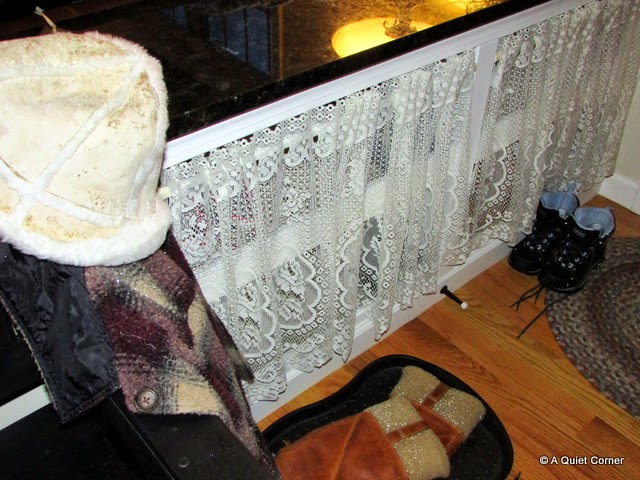 As I watched the birds clinging to the swaying feeders while the blowing snow pelted their little puffed up bodies, the magic continued. 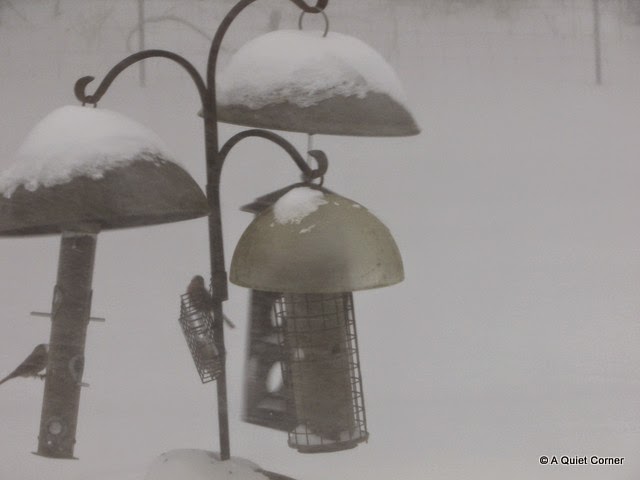 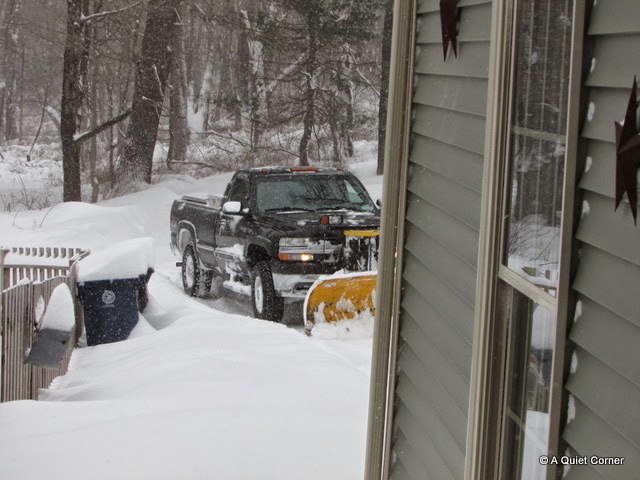 It was time for Luke to make a second sweep.  He'd been up all night and was exhausted.  As of this writing (noon), the Pres is joining him to give him a little break.

Did I ever tell you that Pres used to plow snow years ago?
His experience will come in handy as we make our way through Juno, the Blizzard of 2015.

Sharing what's going on here with you and those at

Oh, one more thing.
I told you today's post would be entitled
Buried Alive 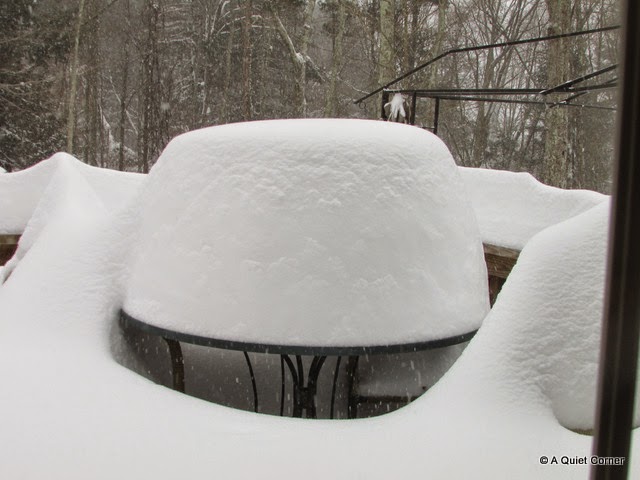 eileeninmd said…
Magic? I guess that is a matter of opinion right? You must be a snow lover, lol! Enjoy!

Sandra said…
I love that table and love that you love all that snow which is something i intend to never see in my lifetime. unless the weather gets crazy and we have a blizzard here, i love the pic of the shed with the lights on...snow plower is a good skill to have where you live..
January 27, 2015 at 1:05 PM

Sally Wessely said…
Snow can be so magical, but it also can become frightening. I think of feeling buried in all that snow, and I am sure, very sure, I could not live where you do. I am enjoying the beauty of it all through your photos.
January 27, 2015 at 1:30 PM

Judith @ Lavender Cottage said…
It sounds like you're taking this magical storm in stride and I'm glad to hear you're prepared in all ways. I'll be thinking of you JP!
January 27, 2015 at 1:36 PM

Linda said…
Well, you got what you wanted ( and more). Enjoy, stay warm, and take more photos. Enjoying them while breaking from cleaning the floors. It is sunny spring outside my window. Linda@Wetcreek Blog
January 27, 2015 at 1:39 PM

Mari said…
Oh my that's a great deal if snow. It surely is magical, beautiful and fun to play with but hard to plow. That looks like a cake on the table by the way. Stay warm & safe.
January 27, 2015 at 2:58 PM

Buttons Thoughts said…
WOW I was complaining we don't have enough I cannot even snowshoe now. That is a lot of snow but the Pres's experience will come in handy. Be safe and warm. Hug B
January 27, 2015 at 3:23 PM

21 Wits said…
A very wintry magic indeed. I heard on our news last night (in Minneapolis, where it's rather warm and no snow until Saturday) that there are places hit so hard that they forbid driving and those that do, will be issued tickets! Yikes, that is being buried for sure. I like your dairy of the events with photos, and am happy sorry to say, but that it's in your yard and not mine!
January 27, 2015 at 3:59 PM

Amy Burzese said…
Wow. I can't begin to imagine. I think 12 inches is the most we've had here in north Alabama in my lifetime. Of course, everything comes to a complete standstill since some years we get no snow. We do get freezing rain too often though. Stay warm!!!
January 27, 2015 at 4:36 PM

Ginny Hartzler said…
What a beautiful post, and it also shows us how important preparedness is! But you go the extra mile, insuring that all the creatures around you will have food, some warmth, and comfort. Your house in the snow is just lovely. And now we know that you will be fine!
January 27, 2015 at 5:31 PM

Pamela Gordon said…
You got a LOT of snow JP!! I'm glad you were safe and had power and someone to clear the snow away. I like the photo of the fence but that pile of snow on the table is amazing. We got 30 cm. here which is over a foot and it's still going on out there. The wind is wild. I hope you have a cozy night. Take care.
Pam
January 27, 2015 at 7:48 PM

Felicia said…
I read that somewhere they had 36 inches and still counting, 21 would be enough for me.

Breathtaking said…
That's some snow storm! I have only ever seen it snow here twice, and then it only lasted 24 hrs, and my childen made a very small snowman. I'm glad you enjoy it, and that you make sure the birds have food.
Regards.

Beatrice P. Boyd said…
Glad we did not have to go out and plow or shovel or dig out buried cars as Nashua NH got over 30 inches of magic, JP. We were cozy and comfy indoors all day...lasagna sounds like a great dinner for a snow day. Glad Joe was OK too.
January 28, 2015 at 7:59 AM

MTWaggin said…
Wow that is crazy and I love that you have the dog houses for the birds but even more surprised that they use them. Very cool - cold - whatever! LOL Hope you are all warm and safe.
January 28, 2015 at 8:49 AM

Florida Farm Girl said…
I've been wondering how you and the Pres were faring. Glad you're all prepared and doing well. Stay warm.
January 28, 2015 at 7:57 PM

Bethany Carson said…
Wow--it looks like you are really getting the snow! Happy shoveling!
January 30, 2015 at 9:06 AM