Their Turf, Their Rules

When I received the first email from Bill, I was, I'll admit, a bit hesitant.  My first thought was Bill who?  Do I know this man?  Who is Bill?  Do I want to open this?  But I did.

After congratulating me on the beautiful pic I submitted to the The Last Green Valley's  "Photo of the Week" contest, he immediately began asking about the location of my eagles nest, telling me he monitors the nests throughout the Valley, reporting his findings to DEEP.  Well, quite honestly, he could have been "Joe Schmo" for all I know, trying to get info, so I was reticent.

Now you all know that the nest I monitor is NOT on my property, and, out of respect for the property owner, let alone the eagles, I did not want to divulge the precise location.  So, in a professional manner, I responded, saying that I'd been watching the nest for a few years, reporting all my findings directly to Kate at DEEP.  Case closed.  I figured if he wanted additional info, he could contact her.  I thought I was done.

However, in a subsequent email, he told me that Kate had mentioned this nest to him a while back and that they believed the eagles that have been sighted feeding along the river and at the dam were, in fact, "your eagles."

Then, he told me about an eagle survey...a study group that was going to be in the area over the weekend and they were looking for volunteers. 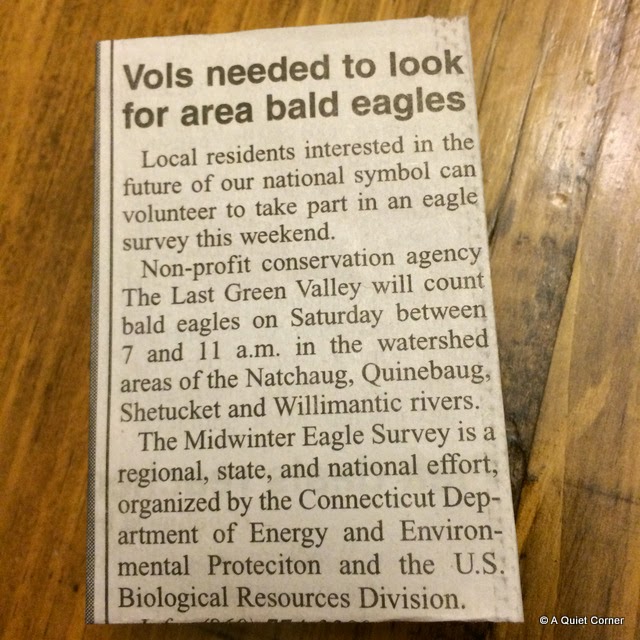 Count me in, I responded.

Scrambling around the night before, digging out my warm clothes, the binoculars, and camera, I wondered if I would even sleep.

Honing in on all my eagle skills, dressed in hubby's duofold long johns that no longer fit him, polartec layers and wind-proof, outerwear, I hit the road long before the sun rose.

I wanted this and was ready.

Yes, I wanted this...even though it was a whopping -4 degrees when I got to the river! The glow just above the horizon told me the tingling in my toes would stop as soon as I saw what I came for.


A national, regional and state survey conducted once a year, it's purpose is to gather the numbers, locations and findings.  It was worth each and every step I took during the four hour trek.

The group that I was part of saw:

One mature adult along the river heading NE (probably one of mine they said)
One immature near at the dam (probably also one of mine)
One young adult (est 3 yrs based on coloring) at the state park about fifteen miles away, following the river about ten feet above the water.

By the time we all gathered for breakfast, it was 11:30 am and temps were now 15.  The final head count will be published in a few weeks.

Sharing another AWESOME adventure with you and those at


Did I tell you that in December, an eagle was found shot (DEEP-$5,000 Reward) along the Connecticut River?
Email Post
Labels: Eagles Mother Nature TLGV Winter

eileeninmd said…
Lovely image. It is very nice of you to volunteer to be part of the study group. But, then if you love to watch the eagles, it should also be lots of fun... Pretty shot of the frozen river! Have a happy day!
January 12, 2015 at 6:57 AM

Linda said…
Are you aware of the Decorah eagle Webcam? http://www.ustream.tv/decoraheagles
There is a live stream of an eagle's nest 24/7 and it will be fascinating to watch once the first egg is laid. We humans can learn so much about parenting from this eagle pair. I watched them regularly two years ago when the camera was on the old nest and gained so much respect for these beautiful birds.
January 12, 2015 at 7:37 AM

Ann said…
I can imagine just how exciting this was for you. That's awful about the eagle that was found shot.
January 12, 2015 at 7:40 AM

Anonymous said…
It is a little scary getting an email from someone you don't know who seems to know about you. Glad you took a little care there and congrats on being part of the team.
January 12, 2015 at 8:18 AM

Sandra said…
perfect for you and so glad you got to do this... as for me there is nothing in this world that would make me hike in those temps.. not even to the grocery store.. 4 hours? you are a brave and hardy soul.
January 12, 2015 at 9:03 AM

Inger said…
What a magnificent adventure, so good for the soul. I would have loved to join you and see the eagles. There are golden eagles around here, but I have never seen one.
January 12, 2015 at 11:41 AM

Ginny Hartzler said…
Well, it sounds like it was worth it, even though it was so frigid. So was it? You did well to be suspicious of that man, at least until you found out more.
January 12, 2015 at 2:53 PM

Florida Farm Girl said…
I'm so glad there's another nut out there besides me!! Wasn't quite as cold as at your place, but it was 9 degrees when I went out Saturday morning. Thank goodness for the sun!!! Was a good outing even though the bird count wasn't much.
January 12, 2015 at 5:02 PM

Jill Harrison said…
I love this image of the frozen lake tinged with the low sunlight. Beautiful. I am visiting you today from over at Communal Global. Wishing you well for 2015
January 13, 2015 at 9:49 PM

Rambling Woods said…
Very exciting to participate in this kind of survey. I am so sorry about the dead eagle. Michelle
January 13, 2015 at 11:38 PM

Suburban Girl said…
It is always nice to be part of something like that. I makes the cold bearable!
January 14, 2015 at 8:56 AM

Matkatar said…
Lovely photo...though I just came from winter to warm Barcelona -and I don`t miss the coldness! Have a nice weekend!
January 16, 2015 at 4:46 AM