Tuesday, after getting ten inches of the "white magic," it was time to play. Flipping through my recipes, I came across an old, old one that another friend had given me.  Baking is my idea of playing. 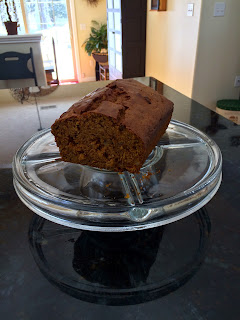 Sift together flour, baking soda, baking powder, cinnamon and salt (if adding).
In a large bowl beat eggs on high until yolks and whites are well combined. Gradually add sugar until thick and lemon colored. Beating consistently, add oil and pumpkin. Reduce mixer speed and add dry ingredients. Stir in walnuts, raisins. Place into two ungreased loaf pans and bake at 350 for 1 hr and 10 minutes or until toothpick comes out clean. Cool completely on rack before removing from pan. Sprinkle with confectioner's sugar if desired.
~~~

Finishing up the laundry while the loaves were cooling, I heard the engine outside. Knowing that the Pres was at work (I still have to tell you that story...not a full-time or even part-time...more like as needed for his brother), I came upstairs because I knew who it was.  He calls it playing....a guy and his toys, he told me last week. 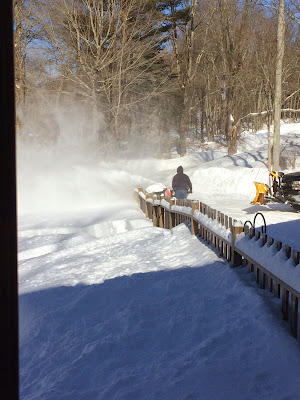 Yes, it was Luke...snow blowing the ten inches we got Tuesday.   Watching him make his way around the trails he made last week, I thought about what great people they are.

Bringing him out a slice of the warm Pumpkin Walnut Cake and watching him devour it with a smile on his face, I knew what I had to do next. When he was done and loading the machine, I placed the second loaf wrapped in foil on the dash of his shiny black pick-up.

After all, the sun would keep it warm until he got home.

Sharing more snow, friends and a recipe with you and those at

eileeninmd said…
Wimpie me is saying I am glad that "white magic" is not here... Your pumpkin walnut cake sounds yummy. I am sure Luke appreciated a slice or two.. Great shots, enjoy your day!
February 6, 2015 at 6:28 AM

MadSnapper said…
you are blessed to have him and he is blessed to have you and neither of you are doing what I consider PLAYING... but both are good things to do..
February 6, 2015 at 8:12 AM

Judith @ Lavender Cottage said…
I consider baking play too and it does make great hostess or thank you gifts.
February 6, 2015 at 8:27 AM

MorningAJ said…
Glad you're still enjoying the 'white magic' and very pleased that we don't have any!

Pamela Gordon said…
And that's the way life should be. Neighbour helping neighbour. I'm sure he appreciated his payment. ;)
February 6, 2015 at 10:18 AM

EG CameraGirl said…
Pumpkin Walnut Cake sounds delicious! I think you may have way more snow than we have here north of Toronto.
February 6, 2015 at 12:15 PM

Ginny Hartzler said…
He is s super guy! And the picture you took of him is really beautiful!! Going down that row with the bright blue sky and the snow flying up in the air.
February 6, 2015 at 4:23 PM

barbara l. hale said…
That pumpkin cake looks and sounds yummy! My husband is under the weather so cleaning up this weekend will be on me. Thank goodness we have a plow guy. At least we'll be able to get down the driveway if necessary.
February 6, 2015 at 5:36 PM

Ann said…
Yum, that pumpkin walnut cake looks so good.
I don't know how much snow we've gotten here but the piles around my driveway from a friend of ours plowing is just about over my head
February 6, 2015 at 6:48 PM

Breathtaking said…
We all love wallnut cake in our house, I even give the crumps to the birds, and they love it too.

Perhaps I'm missing something here, but I can't recall the quantity of Pumpkin for the récipe!

Beatrice P. Boyd said…
JP, I like your idea of "playing" as that pumpkin loaf looks wonderful and must have tasted even better. What a wonderful gesture to give the second one away and hope the Pres had some of the first one :-)
February 7, 2015 at 6:29 PM