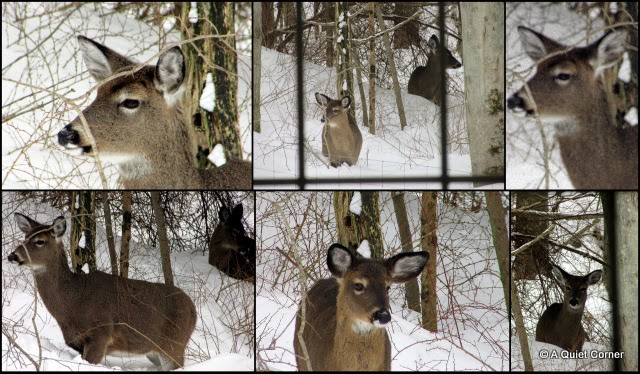 One of the days it didn't snow, the deer made great subjects.

Then, the following day when it snowed again, they looked just as beautiful adorned with the
"white magic." 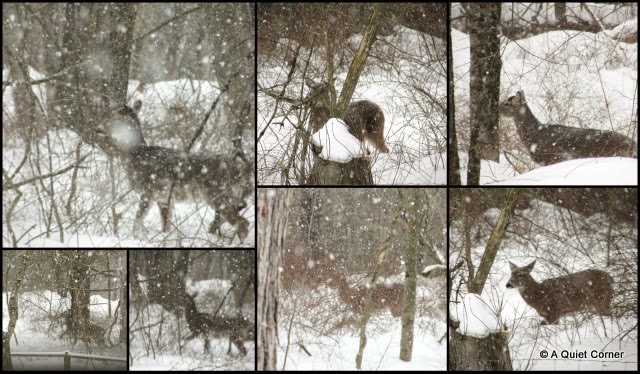 
Looking for it several times a day, the local critters really seem to enjoy the "deer corn" we've been leaving for them.  To avoid greed and fights, the Pres makes seven piles in and around the trail they've made in the snow.  In the second mosaic (larger pic, upper left), you can see the Piebald we've watched for a few years.  Although difficult to see because of the snow, here's a single shot of it. 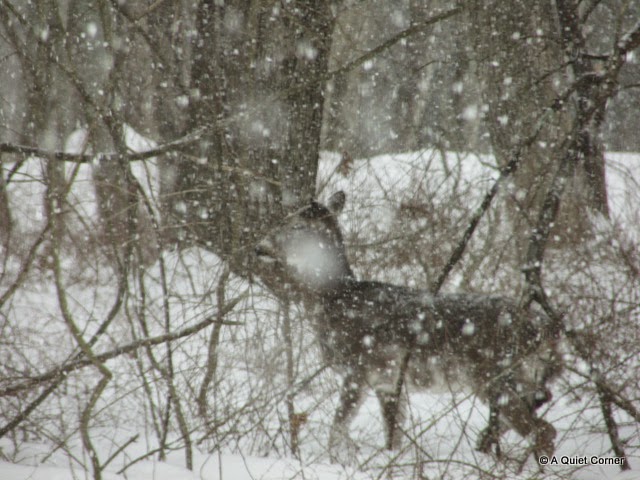 If you don't know what a Piebald is...according to Wikipedia...
A piebald deer is a deer with a brown and white spotting pattern that is not caused by parasites or diseases. They can appear to be almost entirely white. In addition to the non-standard coloration, other differences have been observed: bowing or Roman nose, overly arched spine (scoliosis), long tails, short legs, and underbites. 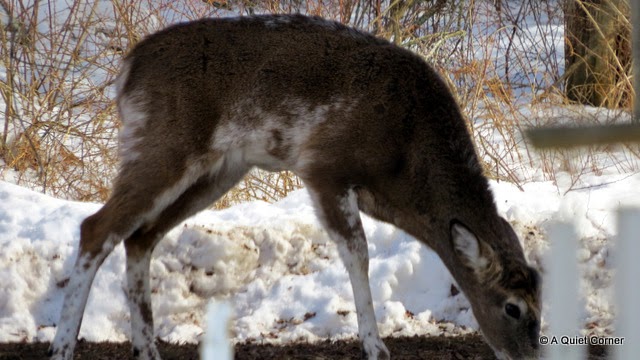 Giving you a better idea of it's markings, this shot was taken a year ago (Feb 2014), .
Email Post
Labels: Critters Family Winter Yard Work

eileeninmd said…
Pretty captures of the deer! I have seen a Piebald deer in Shenandoah Nat'l park, it was cool. I love the photos, stay warm. Have a happy week!
February 16, 2015 at 6:48 AM

MorningAJ said…
I don't think I'd mind snow too much f it brought that kind of sight to my garden! But I really don't envy you the weather. Stay warm and dry!
February 16, 2015 at 6:55 AM

Ann said…
Pretty pictures but your white magic is getting out of control and spreading too far away from home. Could you please call it back home, we don't want any more of it here....lol
February 16, 2015 at 7:06 AM

Buttons Thoughts said…
Yes you certainly are getting a lot of winter:) I have never heard of those kind of deer.They are very pretty. Nice that you are feeding them. Hug B
February 16, 2015 at 7:52 AM

MTWaggin said…
I have never seen a deer with those kinds of markings - interesting! I bet all the animals on the upper east coast are struggling right now to find food and get around - and we thing we have it bad!
February 16, 2015 at 8:37 AM

Roses, Lace and Brocante said…
The deer are fascinating, and how lovely you know nee of them because of those piebald markings!
Obviously your garden is on their map as 'those kind people who leave us food'. Information they will pass on to their generations to come!
Beautiful photography.
February 16, 2015 at 1:00 PM

Ginny Hartzler said…
I learned something new today about the Piebald. Love these photos, especially the way they show the black outline of the ears. You are so lucky to have these beautiful creatures so close!
February 16, 2015 at 4:00 PM

Judith @ Lavender Cottage said…
That is nice that your hubby feeds the deer during the winter months when it must be hard to forage on their own. I've read you're not supposed to do this but really, is it any different than feeding the birds at our feeders. If you love the wildlife, you help them without interfering with Mother Nature. I'm sure there will be people to argue this point - hope I haven't started anything. :-)
Thanks for linking to Mosaic Monday JP.
February 16, 2015 at 4:04 PM

Beatrice P. Boyd said…
Had to delete my previous comment because of my typing error, but wanted to say:
JP, you and the Pres are "dears" to feed these deer and sure they appreciate you both!
February 16, 2015 at 6:38 PM

Happy Week to you,
artmusedog and carol

Breathtaking said…
It's so good that you help these beautiful creatures to survive these cold winter days. Your photos are fabulous!:)
February 17, 2015 at 3:39 AM

Lee@A Guide to Northeastern Gardening said…
Your snowy winter photographs of the deer are simply beautiful!
February 17, 2015 at 7:42 PM