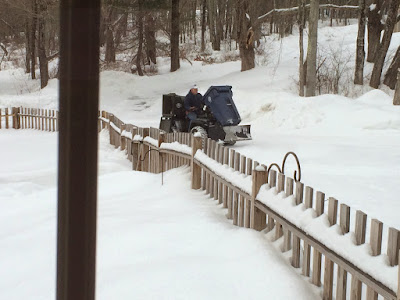 Using the ATV rather than walking, the Pres chose to bring up our trash barrels in one trip rather than two.  This was before the storm hit this past weekend. 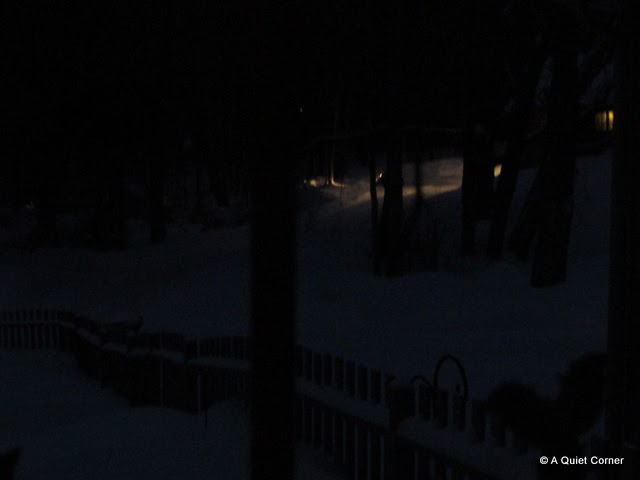 Plowing in the dark enabling the neighbors to get to work on time before the storm (Neptune) ended Monday, the Pres got up much earlier than normal.
He'll take a nice, long afternoon nap since he was up so early.

This morning, when I took a brief walk on the paths I had cleared for the dogs, there were several roadblocks.  Apparently the blowing and drifting snow filled them entirely so yesterday, once the wind died down, it was the Pres' turn to open up the roadblocks and dead ends. 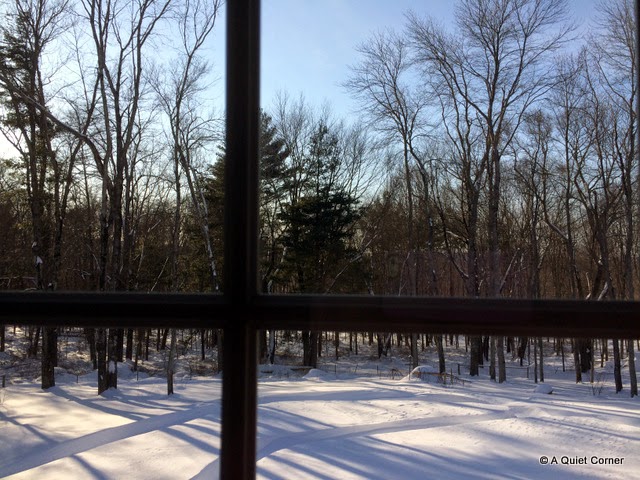 EG CameraGirl said…
This winter sure has dumped a LOT of snow on New England and Atlantic Canada! Drifting snow sure is complicating it! Glad your dogs can get out for a few minutes at least.
February 17, 2015 at 7:45 AM

Anonymous said…
The Eastern Seaboard has been hit hard this winter and it ain't over yet.
February 17, 2015 at 8:38 AM

Ginny Hartzler said…
You were brave to try the path!! We are iced in now and our road is not in good shape, so we will be stuck in here at least till Thursday. And more snow coming tomorrow!!
February 17, 2015 at 3:09 PM

Ann Thompson said…
We're going to start running out of places to put all the darn snow we've got. Nice of the Pres to plow so the neighbor could get to work on time.
February 17, 2015 at 5:08 PM

Su-sieee! Mac said…
It depends on where the path ends. It could be an adventure in itself. :-)

Pamela Gordon said…
So this recent storm was Neptune eh? You have a lot of snow! We don't name theme here except for "White Juan" many years ago. It was the winter after Hurricane Juan blew through Nova Scotia causing so much damage and the blizzard brought 100 cm. of snow to NS so they called it "White" Juan. Yes, you need the paths cleared for the dogs. The blizzard, Neptune if you will, left tons of snow in parts of the Maritimes again. 20 foot snowbanks and paths to peoples front doors. It's a terrible mess. Have a good evening.
February 17, 2015 at 7:51 PM

Judith @ Lavender Cottage said…
I had to laugh at my daughter when she said they blow a path around the house for her border collie to run round and round. :-)
Poor things, having to find the perfect spot in deep snow to do their business.
February 17, 2015 at 7:51 PM

Laura said…
beautiful series!!! our dog loves to make her own path, swimming through the snow with each new fall… but she is a petite standard poodle, a medium sized dog and she still has the strength and energy to plow for herself even at age 11.
February 18, 2015 at 1:29 PM

Betty said…
You should have heard our weatherman a couple of days ago. It was embarrassing. I hope TV stations up by you don't get the tape. Our temperature dropped thirty+ degrees or so within a few hours. In a couple of parts of the Houston area there were a few snow flurries that were caught on tape. It only lasted a few minutes. Even if it made it to the ground it would have immediately melted because the ground is warm and it had been in the 70's lately. He went on and on about the snow and was all excited. I think he needs a trip to Boston.
February 18, 2015 at 8:36 PM