Shoveling, Digging and A Trek

No, not us. Well, we've done a little shoveling and digging where the snowblower cannot go but nothing compared to past years.

The snow, however, is so deep that I haven't been in to check on the Eagles or their nest since mid-January and as usual, I'm concerned.  During all the storms we've had, I wondered....what do they do when their nest fills up with snow? 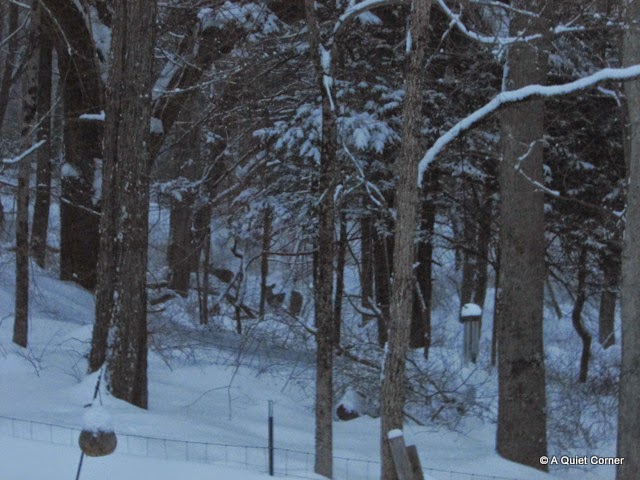 Watching the other animals struggle, the Eagles' challenge was always in the back of my mind each time I gazed out the window.

The small herd of deer have been using the same trail through the woods both morning and night making it an easier trek for them.

But what about the Eagles?
It's been so bitterly cold and with six substantial snowstorms, it was difficult not to worry.  Last night with wind chills, it was 20 degrees below zero!! 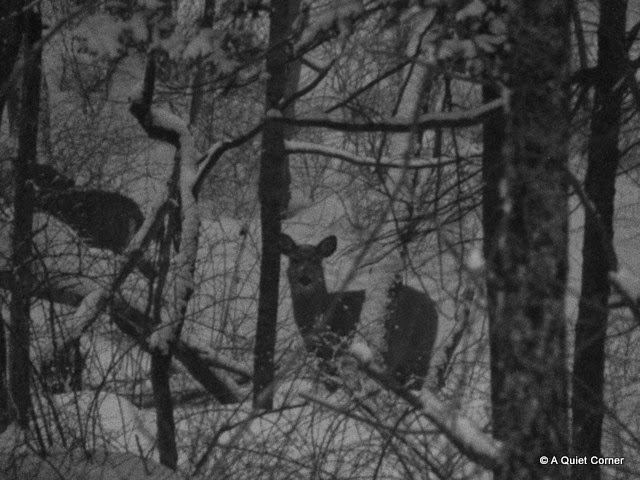 To satiate my appetite and quell my fears, I did a little digging myself...in the form of research.

Eagles are apparently so devoted to each other and to their location, that they will literally shovel the snow with their heads, beaks and feet to ready the nest.   Since their nest did show signs of interest in January, I am assuming they will remain there since there is ample food with open water below the dam for fishing.  The bottom line is snow does not bother them nor interfere with their breeding and egg laying which made me feel a lot better.  Then, shortly after I read all that, I heard from "Al."

Like me, "Al" is a fellow Eagle watcher, who lives in Massachusetts, and has been monitoring a nest for several years.  We exchange emails and info on activity throughout the year and hopefully this year, I want to meet him. His most recent email is what I found so interesting.

The pair he monitors has been spending more time near the nest, adding twigs and sticks to the top of the nest...the "rim." This is typical behavior before breeding.  He also observed them push their beaks and talons down into the deep snow in the nest and pull up the lower nesting material (known as the "duff" from the "bowl") and then placing it on top of the snow.

The snow, he went on to say, will serve as insulation and will be able to pass through the lower part of the nest when melting does begin and without disturbing the "bowl."   Of course, the "duff" is where the eagles form an "egg cup" just before laying an egg.

Each egg has it's own "cup." Typically an Eagle will lay an average of two eggs, several (2-4) days apart, which occurs 5-10 days after mating.  Incubation is typically 35 days.


You see, it is very close to breeding time for our Eagles...his and mine.  While the female was totally focused on the nest, the male seemed more interested in her (if you know what I mean). The female won out and remodeling continued as "she seemed to know of the impending snow" (the storm we got Saturday night).  She is apparently "the planner" in the family.

He went on to tell me that since the river where they fish has not completely frozen, they have an ample food supply yet and can always supplement their primary diet of fresh fish with ground squirrels and other prey.


Although the Pres disagrees with me, now that my glut is feeling stronger, I wanted to walk in to check for any activity.  The Pres however, thinks I am being foolish and will not make it considering the depth of the snow combined with the distance of my walk.  He suggested that I wait until the end of the week giving my body plenty of time to mend.

What would you do? 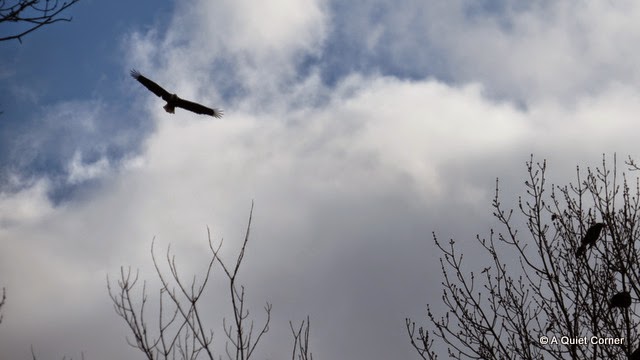 Monkeywrangler said…
I'd send the Pres out in my place, with a video camera to see what the birds are doing!
February 24, 2015 at 6:57 AM

Buttons Thoughts said…
Oh I can see why you are anxious but listen to the Pres. Be careful the Eagles know what they are doing. Hug B
February 24, 2015 at 7:28 AM

Sandra said…
i would listen to my husband and stay home even though I NEVER LISTEN to my husband or so he says.. God made the eagles to take care of themselves... i see the little birds in the deep snow in all the photos in blogland and if those tiny guys can live the big old tough eagles can.
February 24, 2015 at 9:20 AM

Ginny Hartzler said…
I would put myself before the eagles and be safe. Wait just a while longer. Now I have hope for them, they are smart! All this info was wonderful and I didn't know any of it. They will be fine I bet. Safe in the nest with the feathers around them.
February 24, 2015 at 2:21 PM

barbara l. hale said…
I would have some faith that nature will take care of itself. They will be okay, I think. I like winter but I've had enough. Bet you have too!
February 24, 2015 at 2:44 PM

Ann Thompson said…
I would wait. A normal winter might not stop me but the amount of snow that's fallen this year would make me listen to the Pres
February 24, 2015 at 4:35 PM

Barb said…
I'm thinking without snowshoes you'll be in "deep" trouble! I enjoyed your eagle facts. I hope "yours" will weather the weather.
February 24, 2015 at 6:32 PM

Pondside said…
Like others, I hope you decided to wait!
We see lots of eagles here but they rarely have to contend with snow.
February 24, 2015 at 9:36 PM

Rambling Woods said…
Oh tough one..I would want to go, but it is too dangerous. I know great horned owls and eagles nest in some weather that is awful and manage..but we worry don't we...I hope it clears soon.. stay safe....Michelle
February 25, 2015 at 12:06 AM

Lisa @ Two Bears Farm said…
It would depend on how bad I hurt. I try to listen to my body. Most of the time. But I do override if I have to.