Ghosts Of The Forest

Several months ago, while on an excursion at Goodwin Forest, I learned that Beech trees are sometimes called "the ghosts of the forest," because they have a tendency to retain their leaves throughout the Winter, something referred to as: 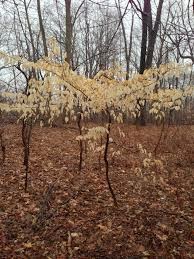 Marcescence is the term used to describe the retention of dead leaves on deciduous trees through the winter. Certain tree species show this characteristic more commonly; oaks, beeches, hornbeam, and witch hazel.


Initially I was content to capture a few pix for you of the Beech trees.  However, my focus changed, as you can see.

Spotting the turkeys in the woods near the fence line, I couldn't wait to get a few shots.  You see, there were two jakes strutting and I wanted to get them so desperately.    Hidden behind the thick tangled brambles, they walked slowly around and around yet never came out into the open like these two hens shown above. Drat!


Abruptly though, rather than following those in the woods, my attention became focused on the ones near the base of the feeders.  Can you see why?
Holy moose-poops!  What kind of turkey is that?

I even woke up the Pres knowing he would want to see this critter! 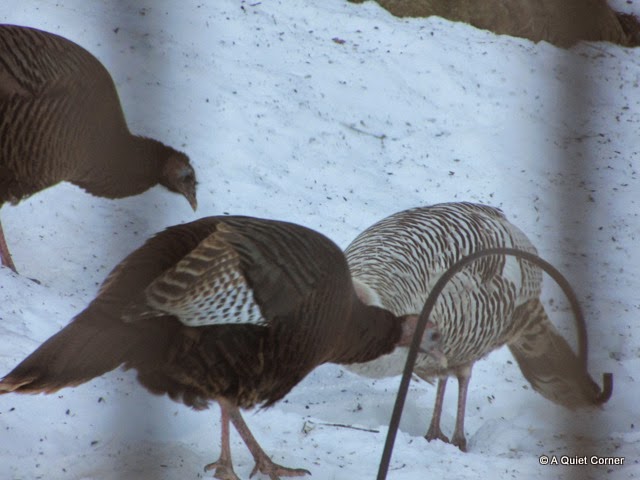 Wanting you to see the definitive contrast between the birds, I wanted to get multiple hens within close proximity. 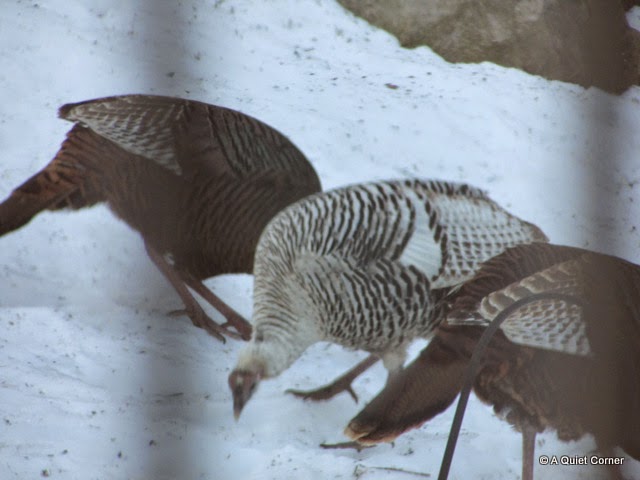 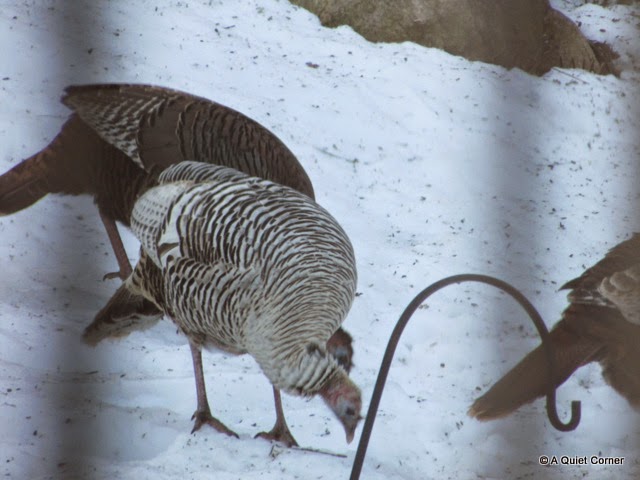 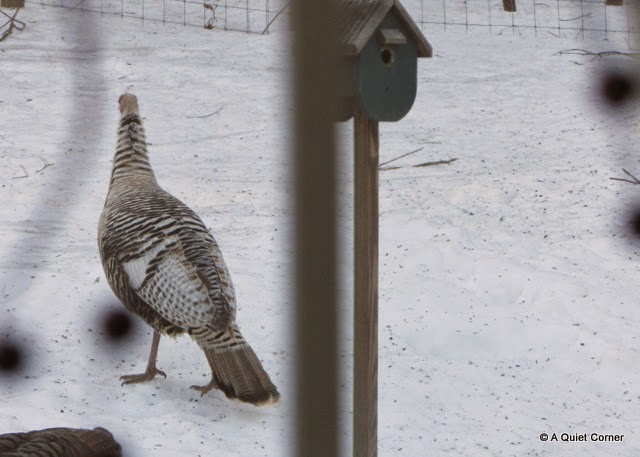 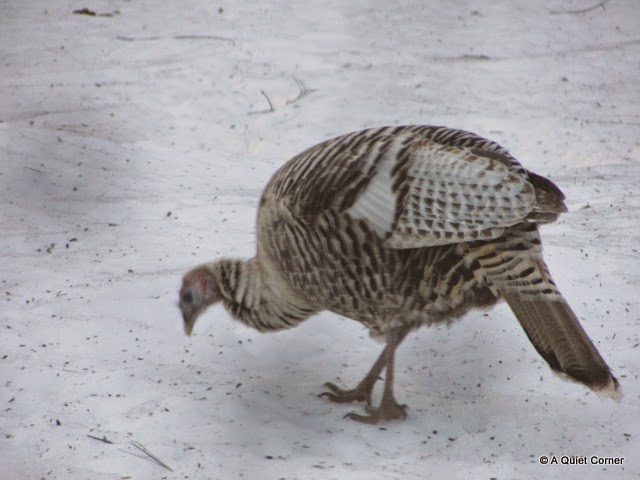 Then, like the others she headed toward the back corner, took a few fast steps and was airborne, landing on the other side and disappeared into the woods. 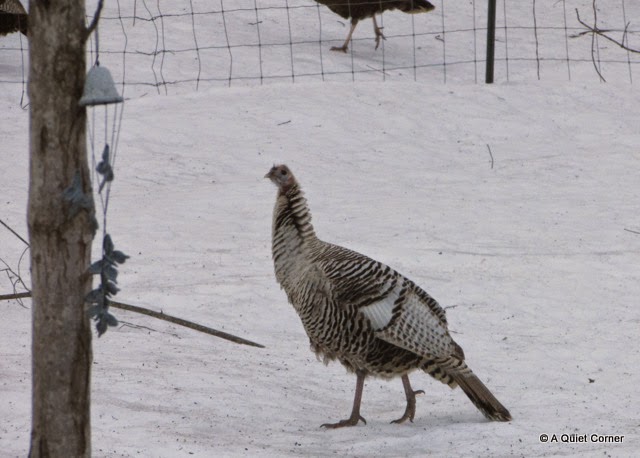 After I returned home from the gym, I decided to do a little digging myself as I pulled up the pix.


"The white hen is probably a color phase known as the smoky-gray. From a distance, these birds appear to be white, though they are not albino. They have dark eyes and normal-colored legs. Up close you can actually see all the colors of the typical eastern wild turkey. However, the colors are muted or ghost-like, making the bird appear white or light gray. This color phase is a recessive trait and it is likely that the bird's mother was a typically colored wild turkey. However, both her mother and her father had a recessive gene for this color phase. So, it is likely that the offspring of the light colored hen would be of typical color. She would have to mate with a gobbler that had the recessive trait in order to produce white poults and the chances of that happening are pretty slim."

MTWaggin said…
Wow that would have been such a lovely surprise. What fun to see the odd colors on that turkey!
March 25, 2015 at 8:55 AM

Sandra said…
i will add this to my list of learn something new every day in blog land. the ghost tree and he ghostly turkey hen.. i knew the oak and the avacodo trees in our yard kept the leaves all winter and don't drop until pushed off by new, but not the name of it...
March 25, 2015 at 9:49 AM

A Colorful World said…
Oh, you are just the lucky duck! :-) How does one take a walk in the forest and end up with a totally syncopatic themed blogpost without even knowing it was going to happen! TWO ghosts! I loved learning about the ghost trees, and then how cool, there were suddenly wild turkeys in your path...and then here is another ghost, a lovely pale morph turkey. Wow!
March 25, 2015 at 11:09 AM

21 Wits said…
Wow, what a fun adventure this was. Your photos bring us right there up close, and that turkey is just beautiful. Great colors and not very common to see.
March 25, 2015 at 11:18 AM

Ginny Hartzler said…
Are they some kind of partridge or prairie hen? Beautiful feathers. So from what you learned, this is a rare bird. Maybe Quail? I did not know that about the Ghost Trees, that fact is so cool!
March 25, 2015 at 1:38 PM

Molly said…
She really does stand out from the other hens

Anni said…
Wow!!! They're all gorgeous. I can see why your focus changed. And she is so pretty amongst the flock...