Because we are on a ridge, I have a nice view of the sky looking both to the West and Northwest.  In the morning when I'm drinking my coffee, it is a perfect spot to see what's going on even before the dogs and I get out there.

And when daylight comes, it is such a pretty view...like my own picture window.  Look what I spotted.  Do you see that little "blob" out of place sitting on the limb of that big Maple?  Good spot! 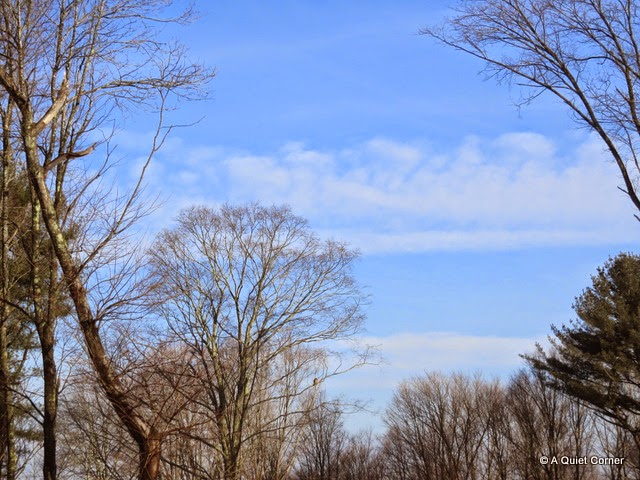 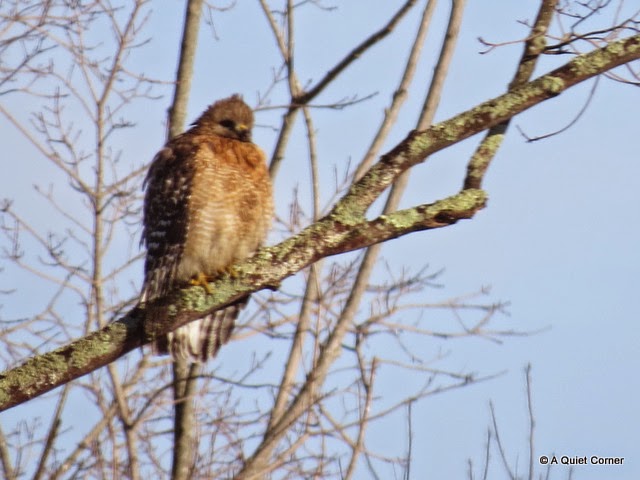 Later that morning, the Hawk was still there so I brought the camera out with me.

Perched on the same branch when I went out again later with the dogs, I took advantage and took a bunch of pix.

Looking around, watching the dogs and I as we made our way through our morning routine, it just sat. 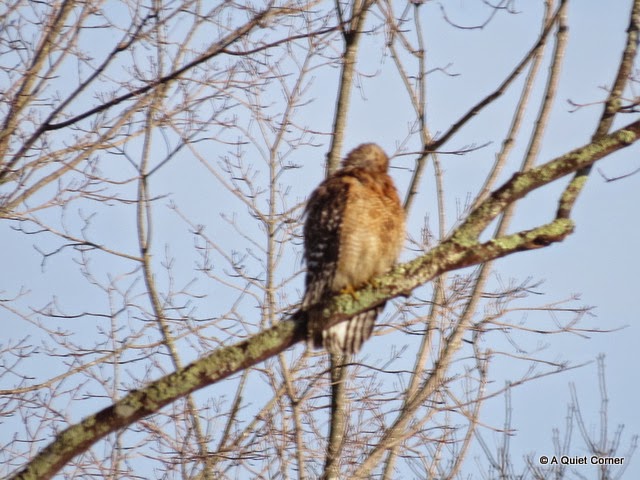 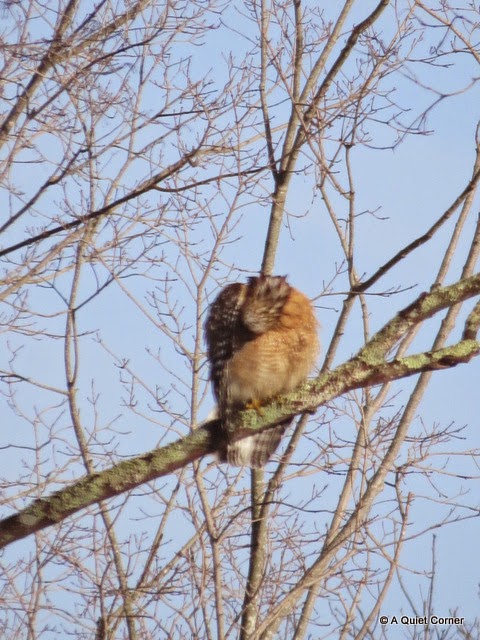 Keeping my distance, I'd look up, snap a pic then move on.

Preening and apparently fixing a few feathers that were out of place, it seemed to enjoy the morning sunshine beating on it's chest. 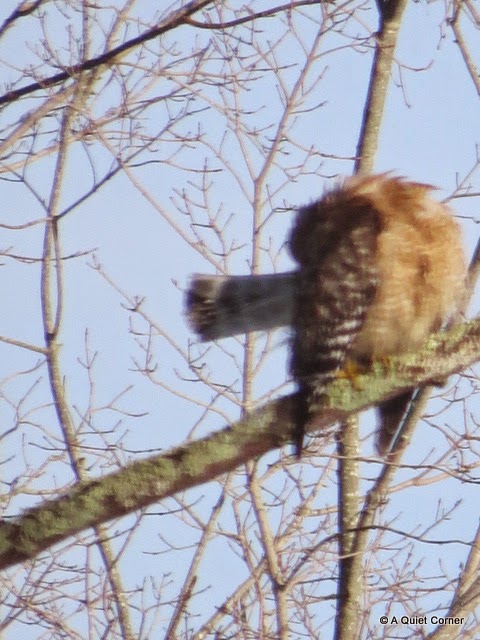 And then there was that "itch."


At first I thought it was a Red-Tail but looking at it's coloring and markings I'm leaning toward a Red Shouldered Hawk.

What do you think?


Then back to looking around again. It is amazing the amount of rotation a bird has in it's neck, isn't it? 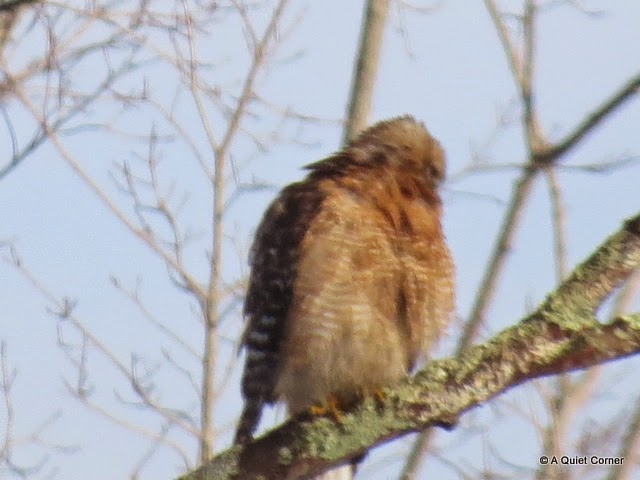 Our morning routine ended with it flying off in the direction of the thicker pines to the North.  Perhaps it spotted a mid-morning snack.  It must have thought that the limb was a good spot, because it stayed for a long time and showed up three days in a row!

MadSnapper said…
not only the hawk looks good but the sky and trees against the sky are just beautiful. i know you are happy dancing all around outside. hope hubby is doing ok
March 17, 2015 at 8:41 AM

FAB said…
You are so fortunate to have such a lovely view to greet you daily.

Breathtaking said…
What a fabulous sighting. Not only is the halk a handsome bird but you have halk eyes to see it way up in the tree. Well done!:)
March 17, 2015 at 2:47 PM

Anonymous said…
You do have a lovely view. Good job spotting that hawk. Glad it stayed around for a while. I watched a group of crows mobbing a Red-shouldered Hawk the other day. It kept trying to settle on a branch but they kept attacking and chasing it until it just left the area.
March 17, 2015 at 7:11 PM

E. Beth. said…
wow, he needs a new do? looking kind of rough. i get it has been a rough winter? when do they get new feathers? don't they go through a stage where they get new ones... did i dream that?

Anonymous said…
That is a lovely view out your window. How nice of the hawk to pose for you. :) Our most frequent visitors (of the hawk variety) are Cooper's Hawks. I'm not as familiar with the others.
March 17, 2015 at 11:47 PM

Mimsie said…
What a beautiful bird and so patient of it to allow you to take so many pictures.
The only hawks we see in Perth are those in the sky although once I believe we did have one sitting on our shed but that was years ago.
You are so fortunate to have so much wildlife around you.
March 18, 2015 at 12:38 AM

Su-sieee! Mac said…
Neat photos of the hawk. Maybe he's scouting for a nest. How fun would that be watching baby hawks grow before your eyes.
The View from the Top of the Ladder
March 18, 2015 at 3:08 PM

Rambling Woods said…
What a wonderful view you have to enjoy nature without the view of houses. I am glad to know what the hawk is and not one I have seen here...Michelle
March 19, 2015 at 4:25 PM