My back pain vanished last Saturday morning when the Pres told me he couldn't take a deep breath.  A few minutes later he was, thanks to his big red Dodge Diesel, at the ER and admitted.  You see, since our gravel road had turned into a luge, I couldn't drive him with the Mini Cooper which meant that his truck, loaded with tools and unlocked, would be sitting in the hospital parking lot unattended.

Telling him that I was coming "one way or another," he said, "Hon, when you come, bring someone who can drive the truck home.  I don't want to leave it here with everything in it."  Typical Pres...worried about his tools yet to me that meant calling our friend, Luke.

Asking me what time I needed to be there, Luke agreed to drive to my house and leave his truck at our house.  Then I drove to the hospital with Luke to visit the Pres and when ready to head home, Luke would drive the big red Dodge Diesel home for me and tuck it snugly in it's new garage.

Luke is such a character.  Making me smile and asking me if "I had it together" before we even entered the ER and saw the Pres, he made the whole ordeal easier.  Leaving late that day as we walked out to the parking lot, he explained to me the "best way to get up that hill" and the route we would take since it would give me a running start on the luge.

So, Luke went first and headed up.  I hung back, as instructed, sitting patiently in the Mini.  Seeing the big red Dodge Diesel's tires spinning and spinning as the rear end slid toward the deep piles of snow made me cringe.  Then seeing Luke back down to a more level area to get some traction, he put it in 4-wheel drive and made it up...barely...on his second try. 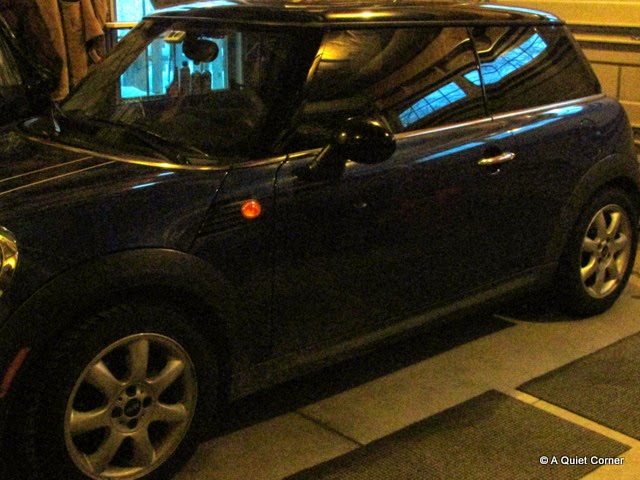 Doing just what he'd told me to do, I shifted into second gear and began my assent.  My Mini made it up with no problem.

Good thing I invested in snow tires for the little thing otherwise I'd be at the top of the luge with no sled!

Sharing our luge with you and

Linda said…
Oh, just the thought of an icy drive makes me cringe! Sunny and no snow here in The Netherlands and probably in southwest Louisiana, too. Let's keep it that way! Keep taking care of Pres and yourself. Linda@Wetcreek Blog
March 10, 2015 at 6:43 AM

eileeninmd said…
The icy hills scare me the most while driving... Your little mini did well. I hope the Pres is behaving himself.. have a happy day!
March 10, 2015 at 7:06 AM

Stewart M said…
Minis are a classic! I learned to drive in an original one, many, many years ago!

EG CameraGirl said…
I'm very happy to have snow tires on my car this winter! I don't know how people get around safely without them!

MadSnapper said…
you just gave me one more reason to love Florida. i am so glad you had Luke to help and to tell you how to get the mini up that icy hill.
March 10, 2015 at 9:16 AM

Mari said…
Wishes of good health to you and the Pres.

Mimsie said…
Please let me first apologise. I do miss some posts and I had completely missed the fact that the Pres has been/still is not at all well. My best wishes to you both in the days ahead. I know it is not easy to have men 'do as they are told' and hopefully the medical people will frighten him sufficiently to make him sit up and take notice.
I will try and keep up with your posts more regularly as I now find I can check 'older posts'. I am somewhat of a dodo on the computer and I guess that is why I miss things.
Never having been in a land where it snows (except on a holiday in New Zealand) I have no idea the terrors that must exist with something as simple as driving a car. Keep safe. Hugs
March 10, 2015 at 10:03 PM

Bee Lady said…
Hi JP,
I've been trying to keep up with your posts, even though I haven't commented. Too many life changes all at once.
First I want to say I know how you feel about The Pres and trying to keep him from over doing it. I gave up. For real. My Shug and I were on our way into town two years ago to work on our other house, getting it ready to sell. (it sold) We had to make a stop for him to have a stress test, but had the (Dodge RAM!) truck loaded with tools for work. We were planning on working right after the stress test! He went in for the test and did NOT pass. He had to have a heart cath, immediately. He wanted to do it with no anesthetic so he wouldn't be sick afterwards and the Dr. said he'd try! He couldn't. The pain was unbearable. Then afterwards, he was throwing up blood. They sent him home! I was a mess. A nurse told my parents that the problem with my husband is he is 55 and acts like he's 25. And he is STILL building a house and STILL working a full time job. He refuses to hire it done. GAAAAH! I feel your pain, I really do. The thing is, we have two choices with men like ours. 1) They will do what they want, and we complain about it or 2) They will do what they want, and we don't complain! Either way, they are going to do what they want!

I LOVE your nature pictures. I can't wait to get into our house and watch nature from my kitchen window.

And I love that you call your driveway a LUGE! It's a perfect name for our driveway too. I take pics all winter long of our cars stuck in the drive. We have one vehicle that can make it up and down the drive in the winter with no trouble. Everything else will either be at the bottom of the drive or somewhere in between waiting on a thaw! Which is here!!! YAY!

FAB said…
My memories of slalom winter driving to work are fortunately a distant memory.