Originally my mission was to walk around the yard to get a little exercise and more practice with the snowshoes.  But then the mission, which was really quite simple, changed.  Now I was going to pick up the dog "residue" that I've been unable to reach from the paths while wearing snowshoes!

Things were "going" (pardon the pun) along quite well until I heard the loud screech.  Turning to see the Eagle batting it's wings as it squawked, it settled on a pine on the treeline and sat in plain sight just looking at me.  Did I have my camera?  No, of course not because I was carrying two "super duper pooper shovels" and wearing snowshoes!!

A few seconds passed then it flapped it's wings, was airborne and vanished, heading closer to the nesting area.  So I continued on my mission, scooping and disposing, artfully moving across the frozen "white magic" while making a mental note of the time of the sighting.

Making my way around the lower corner of the yard along the fence, I was nearing "the end" of my mission.  Feeling like I was being watched, I began looking around.  I knew it couldn't be the Pres because I'd left him in his chair watching TV and the dogs, although watching me, were sitting on the patio basking in the late afternoon sun. 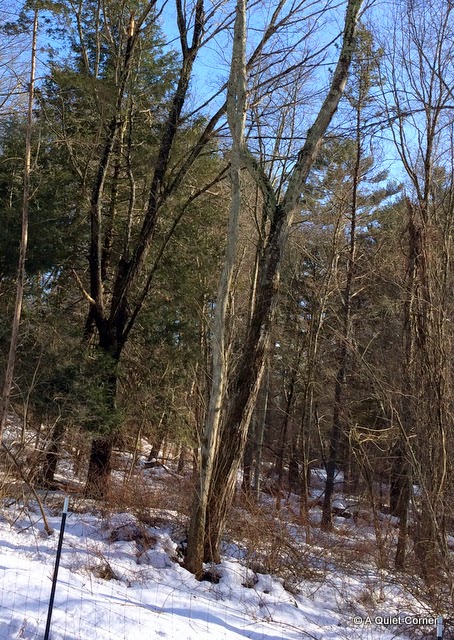 Once I took this pic (with the cell), it, once again, became airborne and dove into the thicker cover.
Can you spot it?  To me it sticks out like a sore thumb.

Okay, I'll give you some help because even the Pres couldn't see him when I showed him the pic who told me I had a "good eye for all kinds of SH residue."

So, "bottom line", here's "the scoop."
Seeing one adult at various times throughout the day, nearly every day over the past few weeks tells me, they are on an egg (eggs).  YEAH!  And the folks at DEEP that I email weekely agree that the numerous sightings are an indication of activity at the nest. 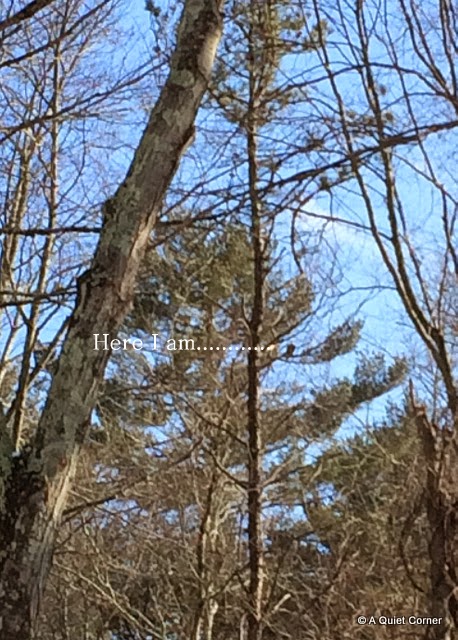 Sandra said…
I could not find it either. did see it in he crop. i bet they are watching you because of feeling the need to protect that nest of eggs...
March 24, 2015 at 8:24 AM

Ginny Hartzler said…
I could not find it. But now you will have baby chicks!!! hurrah!!! Be careful out there! I am always afraid that you will either fall in the snow or get pecked. Or BOTH.
March 24, 2015 at 1:35 PM

Sallie (FullTime-Life) said…
You find wonder and awe even on the absolute most mundane task! (This being a family blog and me a great grandmother and all that, I didn't want to use the adjective that first came to mind;)!

Ann Thompson said…
Awesome. My last super duper scooper job in the back yard wasn't nearly as exciting as yours :)
March 24, 2015 at 7:35 PM

carol l mckenna said…
How exciting for you ~ an eagle ~ Wow