When I walked in to the edge of the clearing, there was still about six inches of snow on the ground and there was also mud and lots of ice so the trek was done without snowshoes.  Making my way over the mounds, downed trees and branches, once I got to my spot, I was ready to just stay put.  Yes, on 3-28-15 everything was quiet and it was snowing. 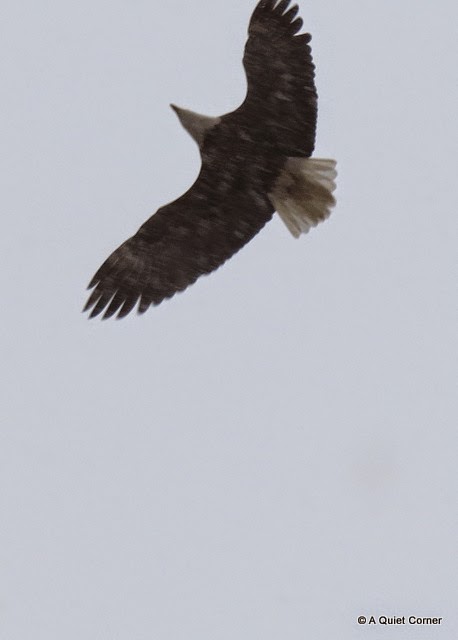 Planning my walk in at this time of the morning was intentional.  I had seen one adult Eagle every few hours coming from the nesting area fairly regularly over the past weeks and it was always heading in the direction of the river.

According to my observations, I thought that this particular time of the morning I might get to see both adults.  Although from my vantage point, I do not have a clear view of the nest, I do know it's proximity. I was hoping to see one bird relieve the other from sitting on the eggs.

Shortly after I arrived, the unmistakable high pitched single chirp of the incoming Eagle while the other adult flew out of the right side of the nest through the trees!

The pix (zoomed & cropped repeatedly) aren't the clearest because of my distance and the fact that it was snowing.  (In fact, the small white specks you see in the pix are snow.)  However, to me, the sighting meant that my observations and conclusions had paid off. 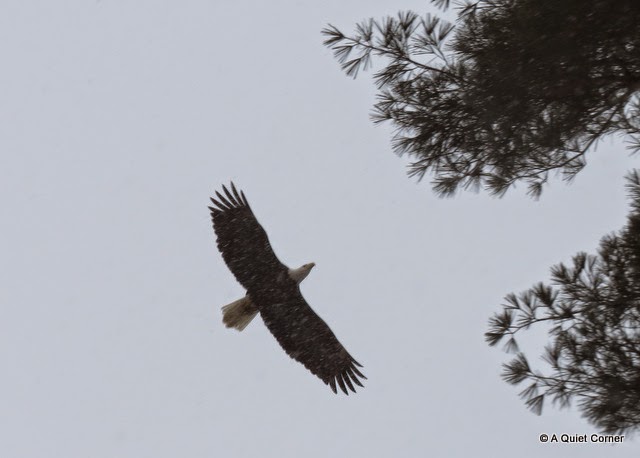 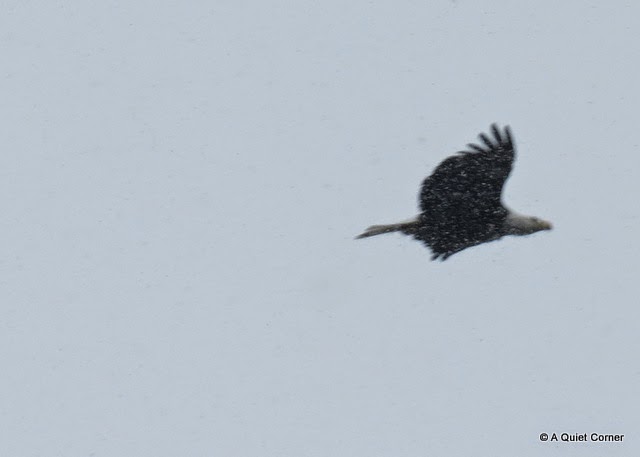 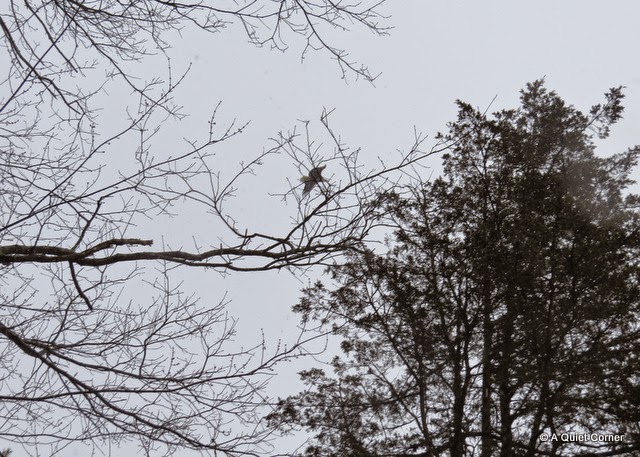 Yes sometimes, through deductive reasoning, valid observations lead to documented conclusions.  Based on previous years' behavior, the egg (s) should hatch the end of April/beginning of May....wooooo, wooooo!

Did I ever tell you I "aced" Logic/Statistics in college?

Sharing simple logic with you and those at

Wednesday Around The World

eileeninmd said…
Great post on your Eagle&nest observation. The photos are awesome..I love the hear the sound of the eagle, it is a cool sound.. Have a happy day!
April 8, 2015 at 6:40 AM

MadSnapper said…
i can see the snow on the wings in one of these.. hope the sun is shining today. i have a very large amount of logical/practical but am lacking in the statistics part.
April 8, 2015 at 9:17 AM

Ginny Hartzler said…
Awesome pictures! I love the flying one where I can see the snow in front of his wings. Awaiting the birth...
April 8, 2015 at 2:11 PM

Judith @ Lavender Cottage said…
Great patient observations JP. I know you'll be back in better weather with more photos to share.
Don't you know anyone with a cherry picker truck that can get you up in the air for your photos? LOL
April 8, 2015 at 4:24 PM

VioletSky said…
How exciting! I've never heard an eagle 'chirping' and would be surprised at its high pitch!
April 9, 2015 at 4:38 AM

i love the snowy shots. amazing views. i find it interesting that an eagle would be out puttering around in the snow. they are super cool. i love how you said you had it all planned out ... you go OM. very cool.
April 9, 2015 at 7:33 AM