Before closing the door behind me, I said to the Pres, "Honey, I'm heading out a little earlier than normal so I can get a few pix.  Then I'm going to the gym.  See you around noon."

Since I didn't take my normal route, it was stop and go all the way because of local school buses.  However, the timing was perfect.  As I approached my destination, I could see what was causing the congestion...the merging of lanes.  A bucket truck up ahead was trying to maneuver a little closer to it's destination.

And what was the reason for the merging lanes, you ask?

And I got the entire process all because of perfect timing! 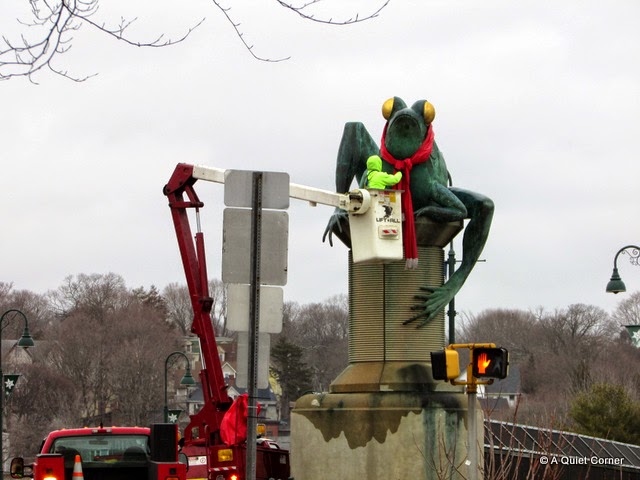 Since several people asked me about the frogs and what they stood for, I went to my resource of all resources to get the scoop.

A retired Navy Medic, Norm is also one of those individuals who knows a lot about everything.  An avid birder, we met at the gym and trade stories about our backyard birding experiences.  I pick his brain all the time so it was nothing unusual when I asked him to tell me the story behind the frogs. 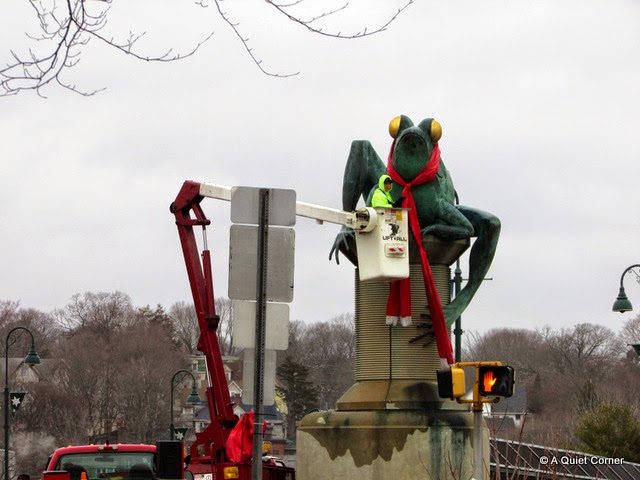 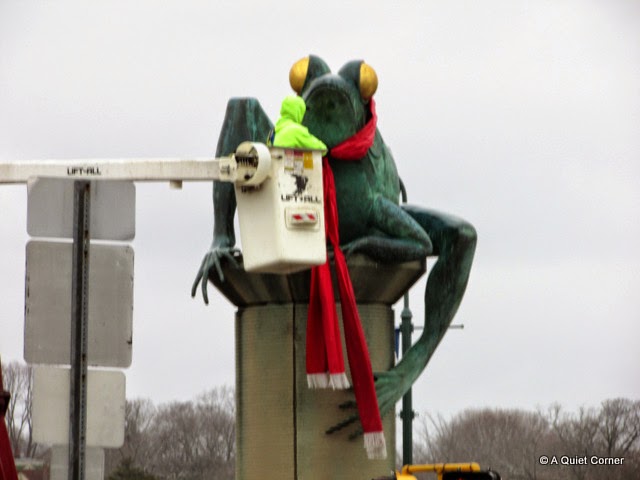 During the Revolutionary War (1754), it is said that one night in June, people living in the county were awakened in the middle of the night by loud croaking coming from the surrounding hills. 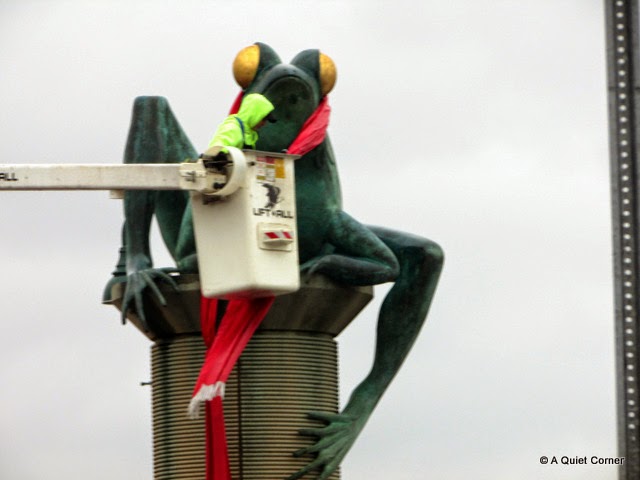 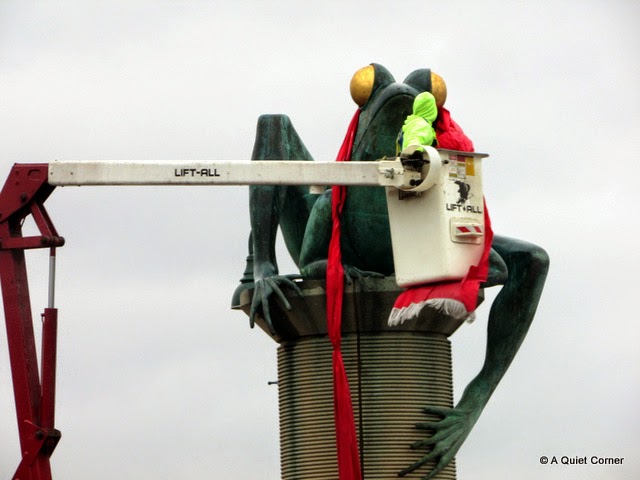 "Some believed it was the screams of warring tribal people or, perhaps, the bellowing trumpets of Judgment Day...

Successive parties of brave men ventured outdoors to investigate the origin of the roiling noises and determinedly fired off their muskets in its general direction." 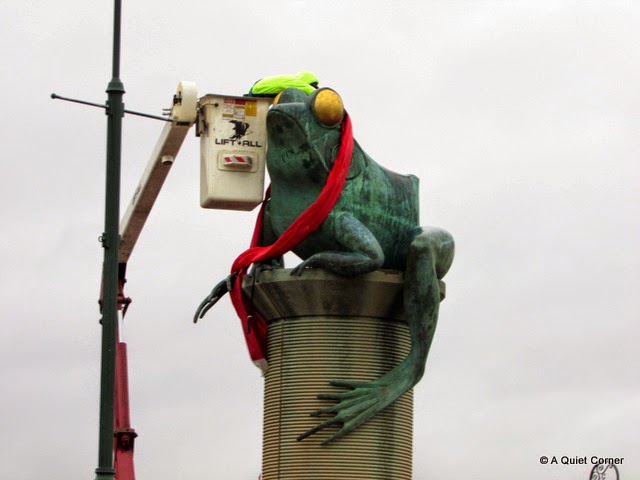 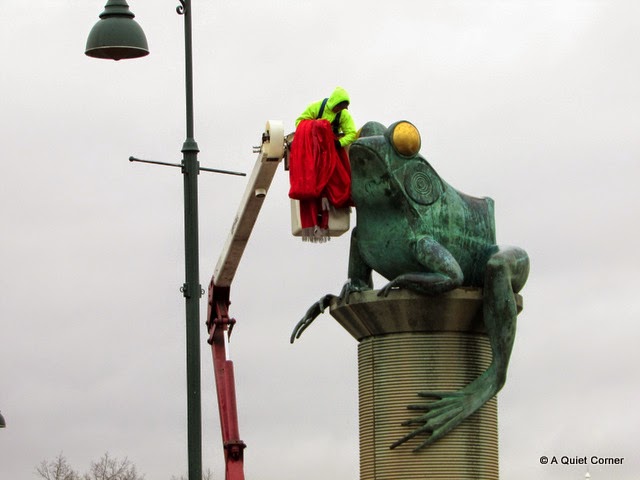 You see, due to the long, severe drought that had plagued the area, legend has it that all the bullfrogs, in their search for water, had descended upon a small pond in Windham.

"The jostling and battling of these frogs, and their struggle to gain access to the area’s only remaining water, had been the source of the previous night’s unearthly din. In the aftermath of the night’s melee, hundreds of bullfrog corpses littered the landscape, hence the tradition that the Frog Fright was, indeed, brought about by a Frog Fight!" 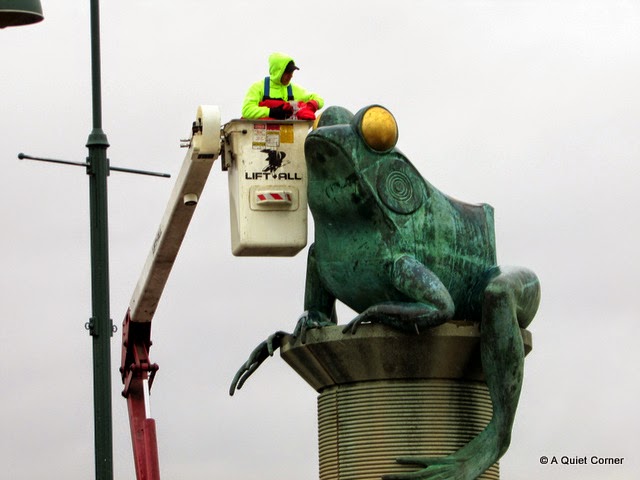 So, you see, not only was it perfect timing for me to get these pix, it was perfect timing that the frogs croaked loud enough and long enough to descend upon the county, teaching the locals to not only laugh at themselves but to pay homage to the frogs..LOL! Made of bronze by Leo Jensen and added to the bridge in the 1990s, they continue to make everyone smile.


Just sharing with you and

Ann Thompson said…
That was perfect timing. Thanks for the story and interesting history behind the frog
April 4, 2015 at 6:40 AM

eileeninmd said…
What a neat story.. Great timing for your photos too. I love the froggie.. Happy Easter, thanks for linking up. Have a great weekend!
April 4, 2015 at 7:27 AM

Anonymous said…
What a great story and fascinating piece of history to have in your 'back yard'. And yes...good timing.
April 4, 2015 at 7:38 AM

Mimsie said…
What a delightful story and thank you so much for sharing it with us. It is always great to that type of tale from another country.
Happy Easter to you and the Pres. :)
April 4, 2015 at 7:57 AM

Linda said…
From the looks of the scarf retriever, the weather there is still "scarf" weather. Keep warm and Happy Easter. Linda@Wetcreek Blog
April 4, 2015 at 8:04 AM

Sandra said…
now this was perfect timing. i do like these frogs. i like the last one without the scarf best of all. and the right timing to talk to your friend about the story..
April 4, 2015 at 10:31 AM

EG CameraGirl said…
Yep, perfect timing! How wonderful that the frogs are still remembered.
April 4, 2015 at 10:51 AM

Happy Weekend to you,
artmusedog and carol

Inger said…
They would make me smile too. A lovely story, which reminds me of how much I enjoyed the stories you used to post when you still lived in the hollow. Will we see some more of them?
April 4, 2015 at 1:00 PM

Ginny Hartzler said…
I LOVE it!! I Love the story!!! I am going to save your pictures and tell the story to my granddaughter along with pictures! Oh NO, I hope they are not taking the frogs down, just maybe dressing them for spring? Now I must see what they are wearing each time they change!!!
April 4, 2015 at 2:30 PM

Margaret Birding For Pleasure said…
Great story rightin your back yard. HAPPY EASTER.
April 5, 2015 at 10:40 AM