It's been interesting out this way over the past few weeks. Things that come to mind include:

Winds were downright fierce earlier in the week causing this limb that had been lodged in the branches of surrounding trees to land with a big thud! 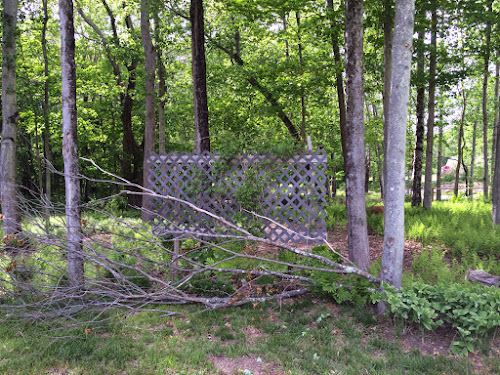 The dogs and I were outside when it fell enjoying the 45-50 mph balmy breeze but after we heard it hit the "baseball scoreboard" we headed in. 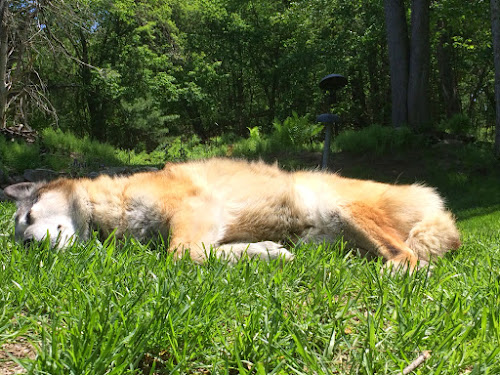 When Moon went for her annual check-up, we were told that she tested positive for Lyme disease. Did you know that there are numerous strains that are not included in a dog's Lyme Vaccine? Taking her prescribed antibiotic, she will rebound according to the Vet.

And then it was the issue with the soaker hose. It had been working wonderfully...until, one day, when the Pres looked out the window, he spotted a gusher! Apparently the end cap had popped off who knows when causing freshly planted seed to dislodge, deep crevices to form and flood the lower garden bed!! The water did, however, form a great waterfall over the rocks! The Pres replaced the end cap and added a clamp for good measure to prevent future mishaps...:)

The holes in the walls have been repaired. Holes?? Yes, the holes caused by the installers of the awning. Apparently they used drill bits close to a foot long because of the extra thick walls and insulation in our home when looking for studs. When they left not only did we have a new retractable awning but we also had nine holes in the bathroom wall and a few protruding lag bolts as an added bonus! The local company has a wonderful reputation so we knew it would be repaired, which it was made to look good as new!

There are a few more things on the radar that need to be mentioned, but they will have to wait until after I weed eat and mow.  Although the Pres wanted me to learn to operate his 60" "walk behind" mower, something told me that would be an accident waiting to happen, so I am opting to use the old push mower instead.  Besides, according to the Heart Association, it's a great cardio workout.

Have a safe and happy Memorial Day everyone!

Ginny Hartzler said…
I am so sorry about moon! I didn't even know dogs could get lyme disease! Goodness, what a bunch of mishaps you have had. I would agree on just mowing with the walk behind mower.
May 23, 2015 at 7:24 PM

Ann Thompson said…
I mowed with a push mower the other day. Yes, it's a great cardio workout...lo.
Sorry to hear about Moon. Poor baby.
I'm glad to hear the workers fixed those holes
May 23, 2015 at 8:47 PM

Sandra said…
poor moon, i hope she feels better soon, with all this going on no wonder you did not see your daughters flowers. when do we see the new awning?
May 24, 2015 at 5:58 AM

eileeninmd said…
Poor Moon! One of our dogs had the Lyme's disease and the neighbors dog too. Luckily they were able to be treated. I am glad the holes were fixed, that sounds awful. Thank you for linking up and sharing your post. Have a great Sunday and new week ahead!
May 24, 2015 at 7:22 AM

~Kim at Golden Pines~ said…
Almost all of our dogs, fosters included have tested positive for Lyme disease, it's a real issue for both people and dogs here in Loudoun County. Thankfully if it's caught early, it's just a matter of taking the meds. I don't know if you know or not, but Moon will test positive for lyme for the rest of her life. If she has a "strong positive" result next year, it'll be up to you and your vet to decide to do further testing to see if it's a "new" exposure or not, or just retreat her. I've not ever retreated, and our pups have been just fine. Good vibes being sent for your girl so she is too!!
May 24, 2015 at 8:41 PM

Betty said…
I guess you're living right in the heart of lyme disease country. I don't think any of my dogs have ever had a vaccine for that, but I'm sure my vet would give it if necessary here. The big problem here is heart worms because of the year round mosquitoes. My little rescue started her first treatment this week. My vet said most rescues here have heart worms.
May 25, 2015 at 11:21 AM

Beatrice P. Boyd said…
Sorry to hear about Moon's diagnosis, JP. There must be something to that old adage about things happening in three's because you have had your share. Hope the holes are repaired and that you enjoy the new awning.
May 26, 2015 at 4:57 PM

Bee Lady said…
Poor Moon. I don't think my dog has ever been tested for Lyme disease. How did you know he had it? So glad it's treatable. I ride on our mower. I'd be all week mowing if I didn't. But I need to find some time for a cardio workout. I suppose if I could sleep through the night instead of waking up at 3:00 am ( and read blogs) I might find time in the morning!