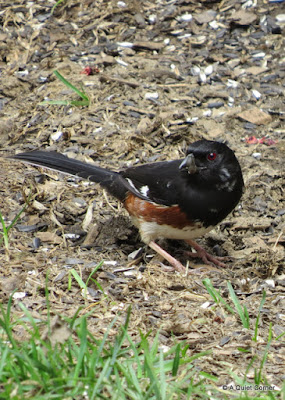 The fast and quick antics of these birds when they sail into the open from the nearby woods never disappoint.

Towhees are one of my all time favorites although I didn't know much about them until a fellow birder in Virginia pointed them out.

Striking in appearance with their jet black, white and rufous colored markings, their song, and quick flight patterns is what I love. 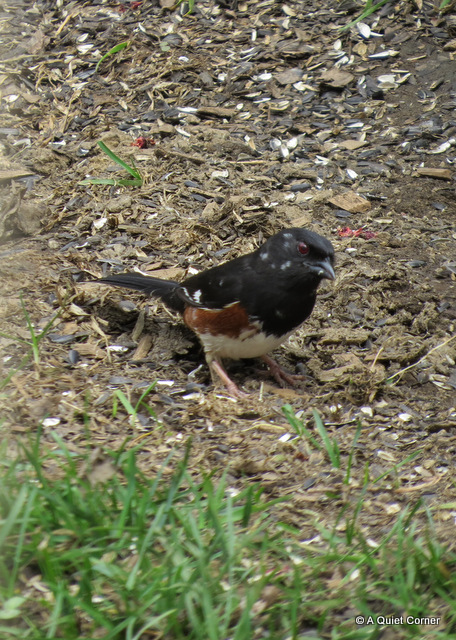 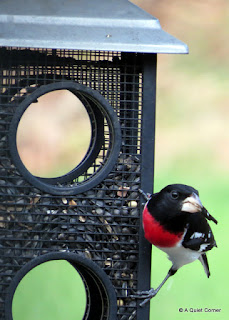 These characters are not shy around the feeders when they arrive in the Spring.  Even their regal-sounding name...Rose Breasted Grosbeak, matches their gentlemanly appearance, doesn't it? 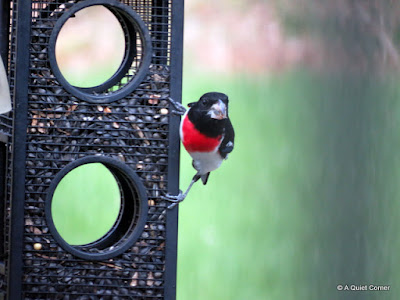 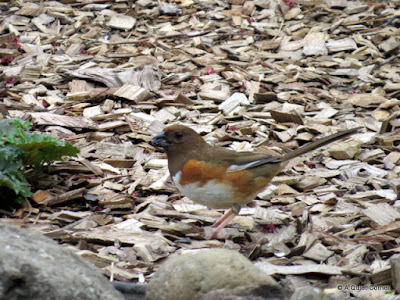 Now when the female Towhee appears, she seems to be in charge and her mate always gives her first pick of fallen seed.

When she leaves, he leaves. 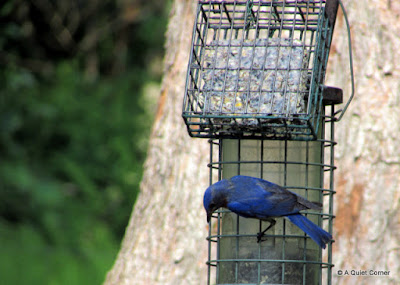 Surprised that the Eastern Bluebirds still come to the feeders for suet, they have filled all three nesting boxes this year!!

Another thing i realized this Spring was how many we have nesting in the surrounding woods. 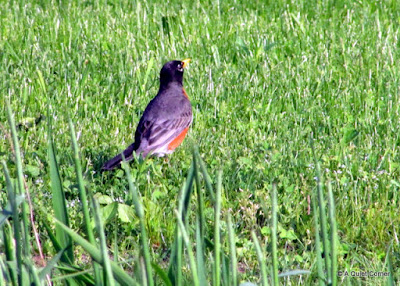 Then there's the resident worm hunter.  The American Robins love our place because we grow "em big out this way."

Needing no explanation whatsoever, the last two pix should tell you that soon I hope to get some shots of the chick which, if on schedule, will be branching soon. 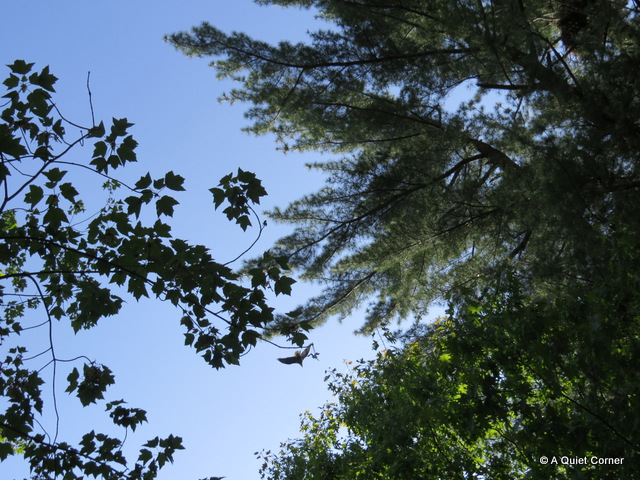 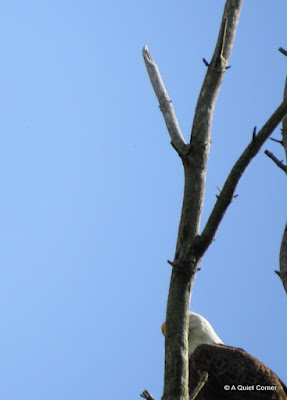 It seems that this year, the adults (and the chick) are very quiet when I'm in observing.

For some reason, they no longer sound an alert when I come to the edge of the clearing. They sit quietly and just watch me watch them.

It's when one sneaks up on me that I am the one making the ruckus.  Last week because I was leaning too far to the left, my three legged stool tipped over.  This pic is the best I could do once on the ground!

eileeninmd said…
Hello JP, your have some great feeder birds there. And I love the eagle capture. It will be cool to see the eaglets. Enjoy your day!
June 17, 2015 at 7:06 AM

Anni said…
In all my years of birding, I've only seen ONE towhee. And never got a change to get a photo...I'm continually searching for another [In other words...I'm sooooo jealous!!!]

Sandra said…
all your little visitors are so cute and sweet and pretty and i really laughed at the from the ground shot... hope you did not scare the chick
June 17, 2015 at 9:19 AM

Adam Jones said…
Some really wonderful birds here, but my favourite is that Grosbeak with it's bright red chest.
June 17, 2015 at 10:34 AM

Irma said…
Beautiful pictures of these birds.
These are not in the Netherlands.
Best regards, Irma
June 17, 2015 at 10:50 AM

Anonymous said…
I've never seen a Towhee and would love to. I've seen a RBGrosbeak here only twice. These,and the Bluebirds are lovely captures.
June 17, 2015 at 12:56 PM

Ann Thompson said…
What a great selection of birds you have. It sounds like the eagles are used to you being around
June 17, 2015 at 6:07 PM

betty-NZ said…
These are lovely shots. It's exciting for me to see different birds from around the world.
June 17, 2015 at 6:49 PM

Kathie Brown said…
Nice pics! I love to hear the towhees calling, "Drink your tea" from the woods. My fastidious sister thinks they say, "Brush your teeth!"
June 17, 2015 at 8:02 PM

Judith @ Lavender Cottage said…
You have a great diversity of birds to photograph besides the eagles. I like the sunflower feeder you've shown, a number of birds could eat at one time with it!
June 17, 2015 at 10:39 PM

A Colorful World said…
Awesome sightings! Love the towhee and the rose-breasted grossbeak, but they are all wonderful. Great shots!
June 17, 2015 at 10:45 PM

Barb said…
What a treat to have an eagle family to watch as well as your other visitors at the feeder. I love the bluebird! The robins are quite happy with the earthworms in my garden, too.
June 18, 2015 at 2:23 AM

Margaret Birding For Pleasure said…
It is lovely that the birds come so close and you got great shots of them.
June 18, 2015 at 3:53 AM