They Wheeled Him Away

Getting up Monday morning at 3:30 was rough especially after the busy weekend of car shopping (another story). But, it was worth it. The Pres and I told our friend, Luke, that we would drive him to UConn Medical Center for his surgery. 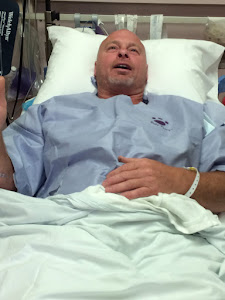 We stayed with him until they wheeled him away to the operating room, which was booked for 330 minutes (5 1/2 hrs). What he was having done was nothing next to miraculous.

When the anesthesiologist came in to describe how they would sedate him for that amount of time, I knew Luke would be in good hands.

You see, 33 yrs ago, he was in a motorcycle accident. His body was still growing at 17 yrs of age and unfortunately, he came out of that surgery with a fused hip...no joint...unable to bend at the hip on his right side. His right leg was nearly three inches shorter than the left.  So for 33 years, he lived with it and finally decided to "get it fixed."

Yesterday we went to visit him and although he is doing well and will go home soon.

I honestly cannot tell you how emotional I was as he walked around the nurses station yesterday.  The Pres and I just happened to be there for his solo walk and when I shared them with his honey, Laura, Mae (my dog sitter) and her little sister KP, they were as teary eyed as I was. 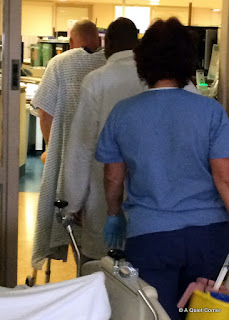 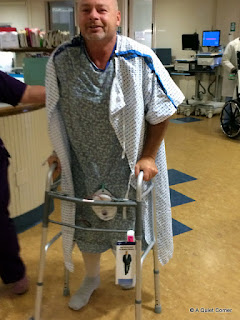 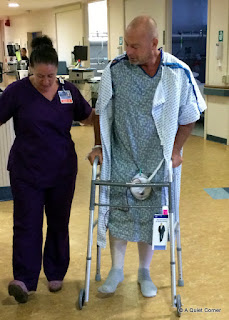 Of course, shortly after his performance, I had a performance of my own.

Sharing with you and

eileeninmd said…
I am glad the surgery was successful. My cousin's hubby had the same thing happen from a motorcycle accident, he refused any surgeries though. I am happy for your friend!
June 10, 2015 at 5:28 PM

FAB said…
I also know what it is like to await the outcome of a lengthy operation so best wishes to Luke for his recuperation.
June 10, 2015 at 6:59 PM

Karen thisoldhouse2.com said…
speedy healing to your friend! It took courage to do what he did, I hope it's a huge success.

~Kim at Golden Pines~ said…
How wonderful for your friend, and how lucky is he to have so many like you there for him, and cheering him on and celebrating with him--What a difference you've all made! From my corner in Virginia, I'm sending healing vibes for him for a quick recovery!
June 10, 2015 at 8:41 PM

Gayle said…
What an act of kindness on your part and you were rewarded by seeing him walking. Best wishes for his recovery.
June 10, 2015 at 9:05 PM

Blondie's Journal said…
I'm so happy for Luke, and I love his smiling face before and after! His life will be immeasurably easier after this surgery.

Now...what is going on with you, my dear?

Mimsie said…
What a wonderful story and thank you for sharing.
Many years ago my mum was hit by a car and her right hip was shattered to the extent they could not mend it or even do a hip replacement. As a consequence her right leg was 3 inches shorter than her left and she had to have her shoe built up to compensate. She was in her 70s when that happened but for a young man to have to live with that impairment for so long!!!! I am so glad everything is looking good for him now.
June 10, 2015 at 11:17 PM

MadSnapper said…
a joyous post today and it is a miracle that they could repair that hip and leg... so happy for him and his family
June 11, 2015 at 8:04 AM

Pamela Gordon said…
Wow. Yay for Luke! That is a long time to go through life like that and have corrective surgery. Glad he's doing so well!
June 12, 2015 at 7:23 AM