Remember the story I told you about my friend, Al  (Webster Lake, MA), and how he saved the young male eagle after it fell out of the nest?  Well, I just had to tell you that the chick worked his way back to the nest and was able to return to the nest by taking short flights with his eagle parent, George, protecting him along the way.

Since then his eaglet chicks...both chicks, who are named Betsy and Ross...have fledged successfully, with George and Martha giving them lessons. Soon they will learn to hunt on their own by watching their parents fish from the lake. That nest is deemed "successful."
~~~

Because of the time and attention I've been devoting to the Pres, I really have not given the Eagles the attention I normally do.  When I found myself in a real slump last weekend, I thought if I walked in, they would perk me up.  After all, seeing or hearing them always does.

Once in and after observing no activity nor hearing a sound, I decided to walk over closer to the nesting tree.  Using the zoom lens I saw no signs of fresh bird poop on the briers or Virginia Creeper at the base of the nest.  I got closer and closer until I was directly under the nest.  Then I spotted these, some of which to me looked like the remains of a bird. 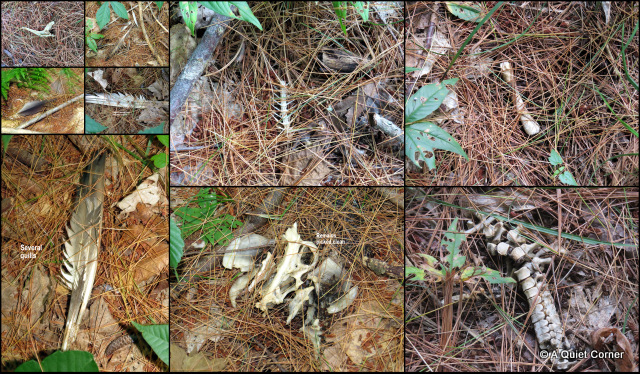 Digging through the pine straw, more "parts" were uncovered as my mind wandered.  Perhaps it had fallen out of the nest, died and was picked clean by beetles.  The adults would not hang around with no young one to care for.  Taking it all in, my eyes became teary and it was then that I headed home. 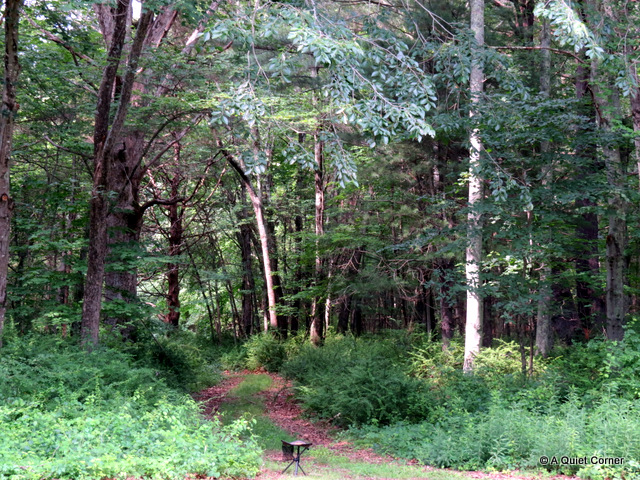 Sending an email off to the folks at DEEP and of course, my friend Al in MA including the photos along with other facts like no recent sounds, no sightings, no fresh sprigs of pine at the nest, etc.  was my only recourse.  Yet, it was an email written with a sad, heavy heart.

Not long after I sent it, my friend Al asked permission to share the pix with his contact at MA DEP, which I gave.  Within a few hours, an expert at MA DEP sent me back an email.  What I took pix of were not Eagle remains.  They were of Eagle leftovers!

Identifying each and every feather and bone, the man's knowledge was unbelieveable, telling me that my Eagles had feasted on Canadian Goose, Mallard Duck and possibly a Brown Bullhead along with other fish.

So here, I am still searching for the chick I heard and saw on the rim of the nest on June 21st.  My opportunities to go in and observe have been limited so I not only missed the branching phase but also the actual fledging.  So now I keep my eyes on the sky hoping to see it fly with it's parents.  This past Saturday, I heard it in the woods so I'm sure it is well on it's way to hunting for itself.  So, no I have not seen this year's immature soaring...
not yet. 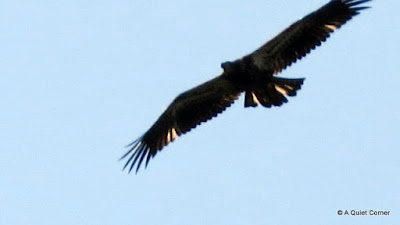 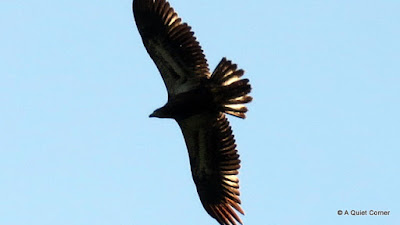 These are the two immatures born in 2013 soaring over the treeline and the yard in August of 2013.

eileeninmd said…
Good morning, my first thought seeing those bones that they were the leftovers from previous dinners. I am glad it was verified. I hope you get to see the juveniles soon! Enjoy your day!
July 29, 2015 at 6:47 AM

Margaret Birding For Pleasure said…
Well I am glad that story ended well adnI hope you will some day see your Eagles from this year soon.
July 29, 2015 at 10:58 AM

Inspired By June said…
A happy ending for the eagles, not so much for the duck and the goose, but nature must take it's course, I know. Looking forward to your shots of the new eagle when he finally takes flight - how exciting to have a nest so close!
July 29, 2015 at 2:10 PM

Ann Thompson said…
It nice that you have people you can contact and have experts to share their knowledge with you. It's also nice to know those weren't eagle remains that you found
July 29, 2015 at 7:26 PM

Ann Thompson said…
It nice that you have people you can contact and have experts to share their knowledge with you. It's also nice to know those weren't eagle remains that you found
July 29, 2015 at 7:26 PM

Molly said…
They are such beautiful and majestic birds

Anonymous said…
Glad you were able to identify the remains. Hope the young eagle continues to survive and thrive.
July 29, 2015 at 10:24 PM

Stewart M said…
Glad to hear that the bones were not the bird!

Hope you get to see it again soon.

Ida said…
Well who would have thought it was an eagle meal you found. Icky but nice to know the Eagles have been eating well.
July 31, 2015 at 12:14 AM