When I had the Wrangler, in it would go.  The kayak, that is.  Then off I would go.  Yet this year the kayak hadn't even been taken down from the ceiling hooks in the garage.  It's too heavy for me to do it alone since I'd be on the 6' ladder standing on my tippy toes in order to unhook one end at a time.

However, once I got the Subaru home, I began making plans.  The car, which is much taller, came with roof rails.  The Pres bought me crossbars.  In order to load the kayak on the roof by myself, I have to be able to lift it up onto the crossbars and place it in the cradle.  Because of it's weight and size, it is difficult to maneuver up and over my head.

Rather than lifting the entire kayak up and over my head, all I have to do is get the nose up onto the roller I have which fits nicely in the hinge of the back hatch.  Then push and it's up and into it's cradle.  However, once I got it up on the roof and stepped back, logic began pumping through my veins.  Why not, I thought.

Reading the manual gave me the know how on how to fold down seats and lay back others.  Snug as a bug in a rug.  Forget trying to lift the kayak on the roof...
it fits!

Of course, I won't go kayaking by myself unless the Pres is around "just in case."  That was a promise I made to him when I first took lessons and bought the "green machine.
However, I thought that taking a ride over to the my favorite spot wouldn't hurt.   So I did just that...kayak and all. 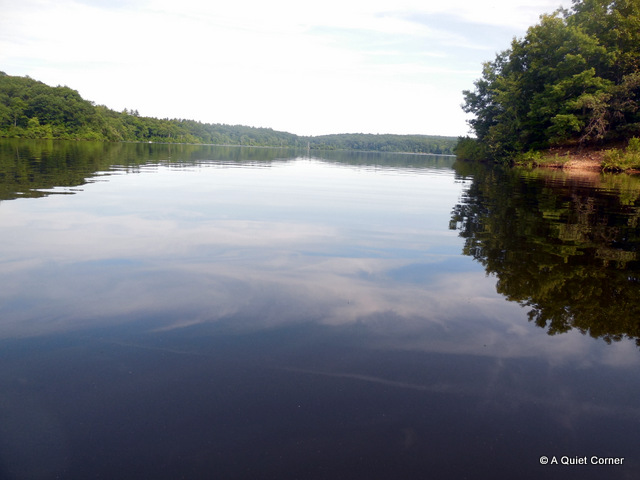 I sure do miss the Pres.
This hospital stay feels a lot longer to me than I thought it would.
Before he went in, we joked about how much he would miss me.
However, apparently it's the other way around.

eileeninmd said…
What a peaceful spot, so glad you got out kayak and all.

Sandra said…
the house is just not the same without them in it with us.. time did drag while bob was in the hospital. glad he made you promise not to kayak alone. and good job getting it in the inside.
July 3, 2015 at 7:53 AM

Ann Thompson said…
I can imagine how strange it must feel not having the Pres there. That's a very pretty spot you drove to.
July 3, 2015 at 5:54 PM

FAB said…
Where there's a will there's always a way.

Black Jack's Carol said…
Hello, I just discovered your blog via TexWisGirl's "Good Fences" meme. I've done a bit of back-reading, loved your discovered fence, felt for you while waiting for news of the Pres's surgery (different type of surgery, but similar fear a couple of years ago) and overall, have found lots of beautiful scenes and wildlife and stories and photographs. What an enjoyable visit!
July 4, 2015 at 1:49 AM

Rambling Woods said…
My daughter just bought one with 4 wheel drive for the baby and her country driving
July 4, 2015 at 1:28 PM