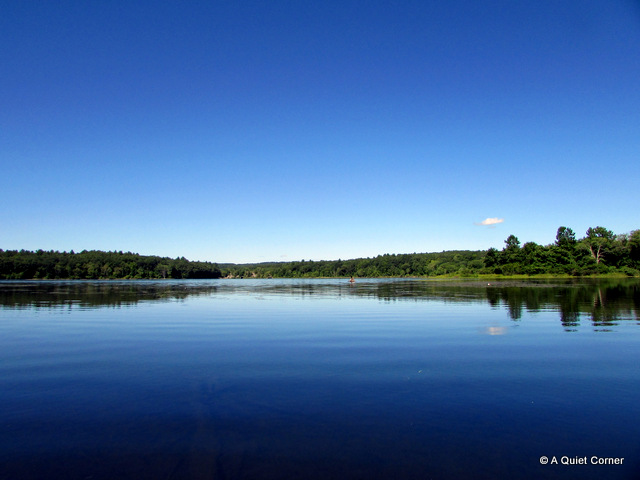 Just look how still that lake was when I arrived.  It was a perfect day for me to go back home...kayaking, that is.  Rather than bore you with all my adventures, I will tell you of one that happened that day.  Yet, before I do, let me tell you how excited I was as I began unloading the kayak.

Clipping my waterproof bag (which holds my lunch, phone and camera) to the side tether, I saw a huge bird circling above apparently looking for an early lunch.  Seeing it started my morning off perfectly but it vanished in the distance before I could identify it.  However, I knew it was a raptor of some sort by it's wing shape and span.  I wondered if it was an Eagle. 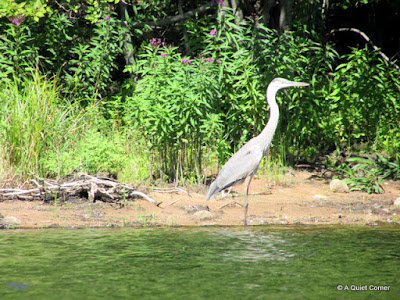 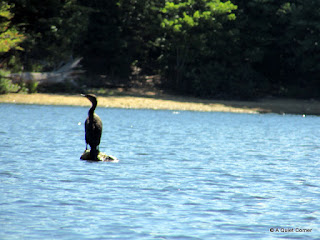 Now happy and content to have gotten the pix of the Herons and Cormorants, I headed up one of the three rivers that feed the lake.  Since we haven't gotten our quota of rain this year and the water was very low,I had to really focus on navigating around the almost protruding boulders and fallen dead trees and stumps.

I was just rounding the bend in the river when it happened.  An enormous bird flew about 15' over my head!  It scared the you know what out of me and was so close, I heard the flapping of it's wings!! 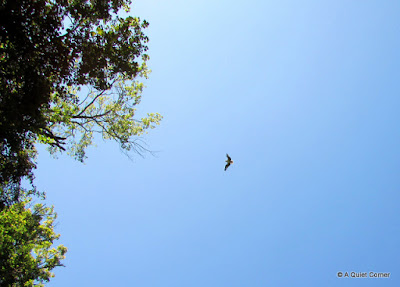 But I never took my eyes off that bird.  Watching it look back at the shoreline it left, then circle twice, almost reluctantly before landing in a tree out of sight

By the time I got the camera out of the waterproof cover and turned it on, all I was able to get was this shot, which was taken by twisting around in the kayak and leaning backwards over the left side.

It is the Osprey I spotted when I first arrived at the lake... 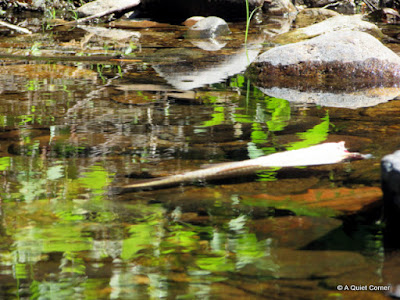 and I apparently interrupted lunch!!

Small Kucing said…
It looks like a lovely day there. You captured just in the nick of time for lunch
August 26, 2015 at 6:15 AM

Small Kucing said…
It looks like a lovely day there. You captured just in the nick of time for lunch
August 26, 2015 at 6:15 AM

Pamela Gordon said…
That first shot of the smooth lake is beautiful. Wonderful to see the osprey and it's lost lunch. I wonder if it came back for it. :)
August 26, 2015 at 7:39 AM

Linda said…
Lovely lake. Thanks for sharing your bird shots. We have been missing them. Linda@Wetcreek Blog
August 26, 2015 at 7:47 AM

Margaret Birding For Pleasure said…
The lake in the first shot i like glass. Great shot and I also love the Heron and Cormorant shots. Glad you didn;t fall into the water trying to get thatt last shot.
August 26, 2015 at 3:27 PM

Ann said…
That first picture is absolutely beautiful. Looks like a good day for kayaking
August 26, 2015 at 4:12 PM