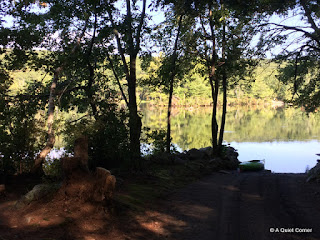 Yep, I went again it was awesome!
Hitting the road with the kayak and gear loaded, heading for a new place to explore, I told the Pres I would check in as usual upon arrival. My daughter's response...be careful.

Although the boat launch sign pointed in the direction of the water, the going was a tad rough when it came to getting the kayak down the hill. Pulling it down required more than a bit of focusing since it was so steep.

But...
once I was out of the shallow cove and in the open, it was pure magic. Dotted with fisherman and so picturesque, I knew it was worth the struggle I had getting down to the water. 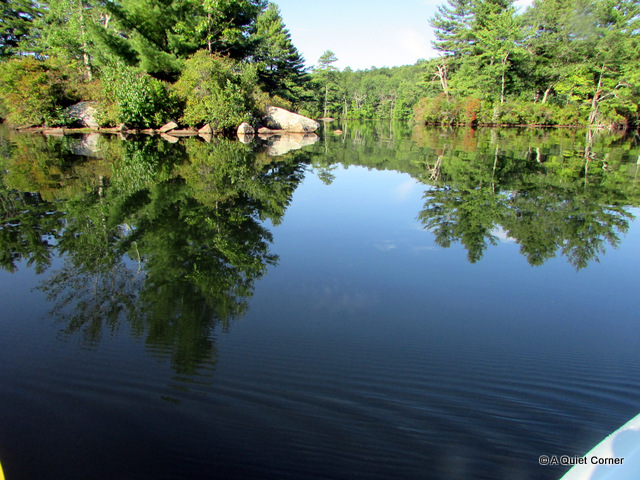 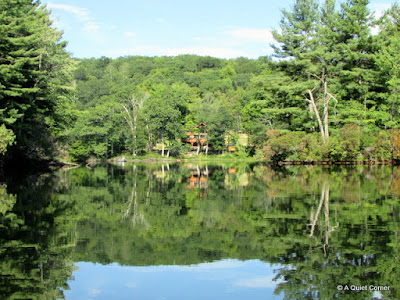 Missing a shot of another Osprey (darn...2 kayaking adventures , 2 Ospreys!!), I paddled closer to the direction I thought it went.  Then rounding the corner, I spotted this place in the distance along with something perched high in the dead tree.

Do you see it out on the limb? To me it stuck out like a sore thumb. 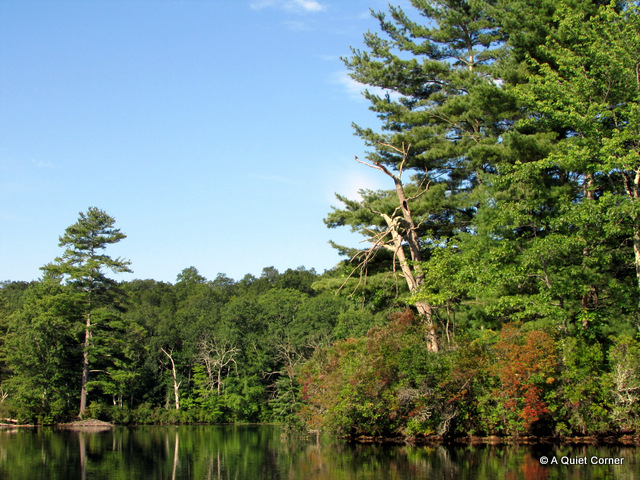 It sat sunning itself as I got closer.
Ahhh, there it is. 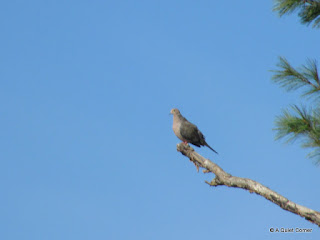 After spending several hours exploring the nooks, crannies and beaver huts, I decided it was time to head home. Paddling steadily and rapidly to get up to and on shore was the easy part. Walking up the steep grade to the car was when (I think) when I mumbled to myself, "Hmmm, It didn't seem this rough coming in."

Grabbing my set of wheels and bungees just like always seemed matter of fact as I made my way down to the bobbing kayak. Lifting the front end up and placing it on the wheels, I secured it just like always. Well, I got about halfway up the steep hill before it slid sideways right off the wheels tipping the entire contraption on it's side!

Glad that no one was close enough to see my mishap because it really was rather pathetic looking with bungees tangled and everywhere!! I readjusted the kayak, wheels and straps before continuing on. This time it worked like a charm. Whew...a new lesson...going uphill can be tough with a kayak.

Betty said…
I guess you don't have to worry about alligators there...huh? Took a blogging break so I'm way behind. Hope your husband is doing OK. One of these days I'll catch up...maybe.
September 2, 2015 at 11:17 PM

Blondie's Journal said…
I applaud you--great job and a lesson learned is never a bad thing. The pain is worth the pleasure---you had a lovely time and caught some great sightings and pictures. I need only to drag my kayak about 70 feet to shore... and I complain like a baby, so spoiled!

eileeninmd said…
Hello, looks like a pretty place to go kayaking. I would love to live in that house, what a view! Love the cute dove. Enjoy your day!
September 3, 2015 at 5:05 AM

Monkeywrangler said…
beautiful! I would love to kayak again, in an area like that!
September 3, 2015 at 7:27 AM

Pamela Gordon said…
What a beautifully peaceful place to go kayaking! That was quite the adventure getting the kayak down and then up the hill.
September 3, 2015 at 12:28 PM