With only 11 trees left to cut down and after seeing what this crew of five could accomplish, I knew it would be done long before "quitting time" on day 2.  Moving right along, the ground crew chipped the limbs while the guys in the bucket tied off sections to lower gently to the ground. 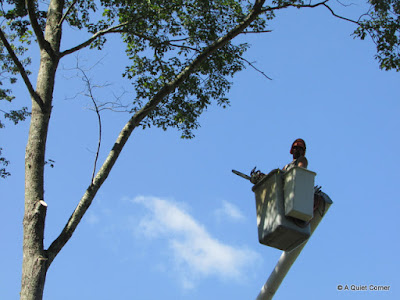 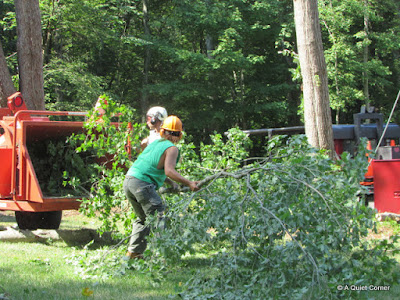 I do know that this post should be about tree cutting but....

I'm really not sure which tree it was when they dropped the upper branches with their ropes and I saw John, the owner, run over to the fallen top.  Watching him scoop something up in his hands and move it off into an island of nearby ferns.  He returned to the spot he came from and began picking up several things placing them in the ferns as well.  The Pres and I were curious so the Pres took a walk down.

Five baby Flying Squirrels and their mother had been in the treetop.  The mother was dazed from the fall so John moved her first then had gone back to scoop up the little ones, moving them out of harm's way.  When it was time for their break, John walked over to the spot he'd placed them but the mother was gone.  Gathering up the five babes in his shirt, he carried them to safety.  Although the mother had vanished yet he was confident she would find her kids in the new tree.

The five little ones, however, did not want a ride in his shirt.  Apparently they wanted "out," climbing all over him...one on his shoulder, one on his back, one on his hip, holding on for dear life. 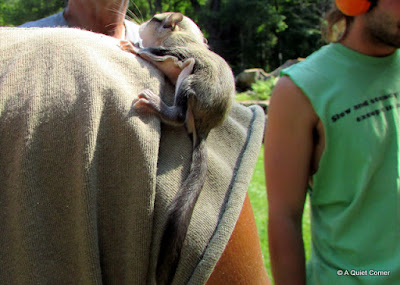 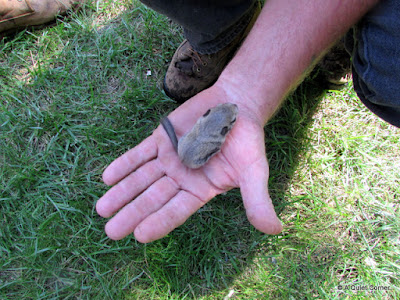 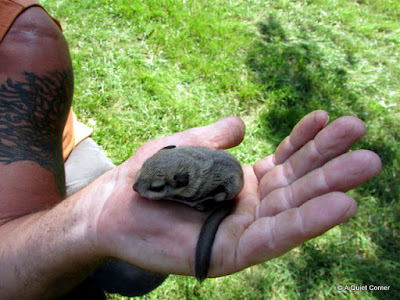 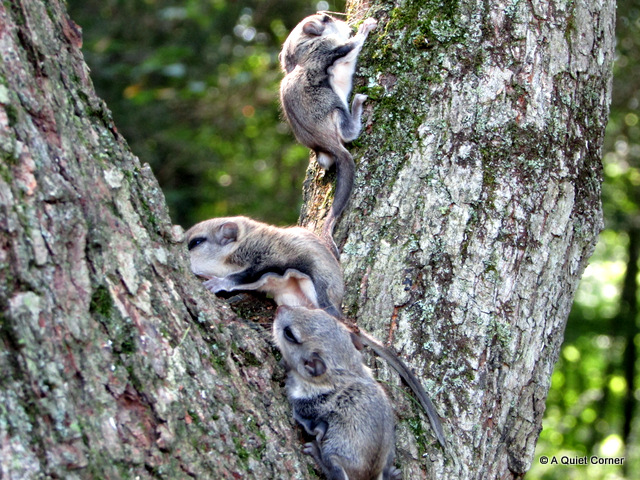 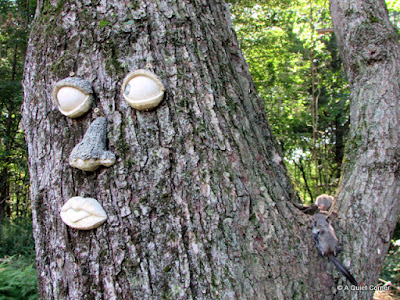 Placing them in our tree with the new face, they hung out for a few minutes catching their breath.  After a few minutes, all five were climbing that tree like Flying Squirrels should.  In fact two of them actually jumped, spreading their loose folds of skin landing gently at the base of the tree.  The guys picked them up and placed them back on the tree.  "Wait here for your Mom, she's ll be around soon."

Linda said…
I'm glad you were able to save the little squirrels...not everyone would be so kind. hope mom found them.
September 5, 2015 at 11:04 AM

eileeninmd said…
Oh wow, very cool critters. I am not sure if I have ever seen flying squirrels. They are adorable. Great photos. Thanks in advance for sharing your post and linking up. Have a happy weekend!
September 5, 2015 at 12:52 PM

Barb said…
Looks like you have a big job going on there! Glad you could relocate the squirrels. Perhaps you'd like some of ours?
September 5, 2015 at 6:36 PM

Brenda @ Its A Beautiful Life said…
Ahhhhhhh.... I'm glad you were able to save this little family. That's the thing with trees, you never know who's made a home way up in the branches.

Thanks for sharing the story with us.

Wishing you a beautiful day...
Brenda