(The voluntary relinquishing of the initial spot I'd chosen to rest my weary head did not go unnoticed and you'll see why...eventually.)

Escorted to Cabin #6 and told, " JP, you get the entire place to yourself." Smiling and  since it doesn't take much to make me happy, I stepped over the threshold and began to unpack and make myself at home...at home in Cabin # 6. 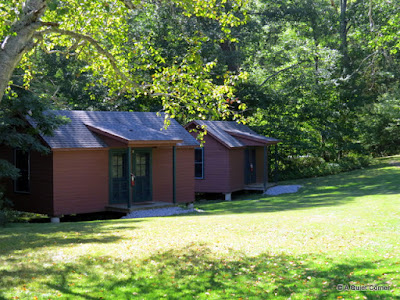 However, that first night I didn't sleep as well as I thought would.  I tossed and turned and when it was time to get up, get dressed and walk down t the bathroom, I really wasn't happy!!  But sucking it up and with flashlight in hand, I navigated my way down the gravel road to the bathroom.

Naturally I had a hard time falling back to sleep after that walk in the chilly night air, so morning seemed to come a little sooner than expected.  Remaining snuggled in the sleeping bag until the power went on, I knew a shower would help.  So, once again, I made the trek down the gravel road to the bathrooms and showers.  I learned something new that day.  When a generator kicks on at 6:00 am, there's not much hot water at 6:03 am!  So, from that day on, I knew the showers had to be taken at night...before the generator was shut off.

All in all, night one, morning one was now a thing of the past and by the time Friday's classes and activities were done, it was time for my shower before climbing in the sleeping bag.  Once again, I made the trek down and then back to Cabin # 6, shut the door behind me and turned the lock.

Just as I was about to climb into my sleeping bag, there was a knock at the door.
The flashlights outside belonged to Nancy and a woman who we'll call Tracy.  "JP, I hate to bother you but Tracy needs a place to stay...just for one night."

"No problem.  She can bunk here.  There are three empties," I replied.

"Well, you see, JP," said Tracey, "I brought my family and we need four bunks."

Looking at Nancy, I smiled and said, "So you're here to help my move again, right?"

A few minutes later, I was taking up space in Cabin # 1.  Placing my bag on the chair, I decided that it would be foolish to unpack...just in case....LOL! 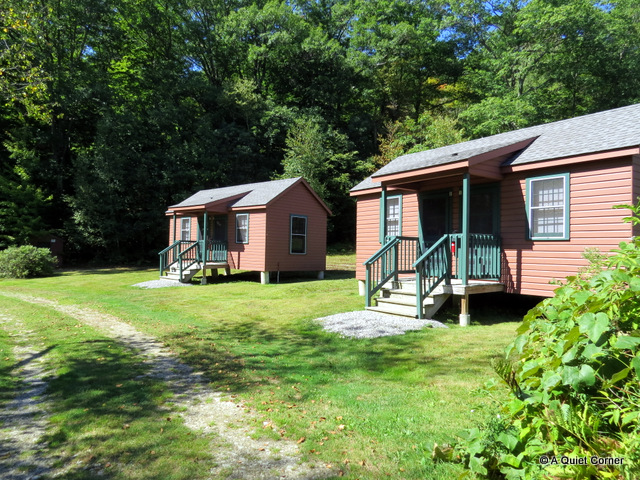 However, Cabin # 1 it was for the remainder of my stay.
My roommate was Lindsey, an awesome gal from CT Forest and Parks, who seemed to know just about everything there is to know about wildlife and forestry.

In fact, she even told me all about Porcupines and THE ONE THAT WAS OUTSIDE OUR PORCH that first night when I got up to go to the bathroom!!  Watching it waddle away, I wondered if my bladder would give out before it was a safe distance away but it didn't.

There was one minor incident though.  When I returned from going to the bathroom, I opened the screen and carefully pushed open the wooden door, trying to be ever so quiet.  Stepping over the threshold, I let go of the screen door which slammed REALLY HARD.  And if that wasn't enough, because it scared ME half to death, I screamed "Oh SH..!"

And so, for the remainder of my stay, I remained in Cabin # 1.
Email Post
Labels: Critters Friends Mother Nature Road Trip Woods

Pamela Gordon said…
Hahahaha! I'd be scared of the porcupine too and the screen door slamming! Too funny.
September 29, 2015 at 6:49 PM

Anonymous said…
If that porcupine was within hearing range it probably raced for cover after both you AND the screen door exploded.
September 30, 2015 at 3:07 PM