And So We Did

The first day of her four day weekend began with me arriving early Friday morning. While the commute didn't go as smoothly as I planned, all my frustrations disappeared when I walked in the door. She was hiding and it was my job to find her after which I would get the biggest hugs, smile and that sound that brings music to my ears...."Nana!"

While my son and his wife went off to work, this is recap of how our day went....


Courtesy of McDonald's, breakfast was picked up on my drive in...pancakes with syrup on the side...YUM...and devoured by both of us while we planned.

On the grocery store trip needed to get ingredients for icing, I was told to "ignore the blabber mouth GPS because I know how to get you to the store, Nana.  It's right near where I take gymnastics."  However about a mile from the house, I knew we were heading to outer Mongolia the wrong way.  It was all good though since it gave me a chance to show her where I grew up, the bridge I jumped from to go swimming in the river below, etc.  Although she was a tad reticent about where we were, reassuring her that I knew there was a grocery store right down the road, we continued on.  Turning into the shopping plaza, I said, "See, there's the store."  And then I got, "Nana if I hadn't told you to turn this way, we never would have found any of this!"

Walking into the store with a big smile she announced, "Nana, we could put the groceries in the car and then walk around all these stores. Doesn't that sound like fun?"

"Nana, I smell food and it smells good. Oh, look Nana, McDonald's. We could go there for lunch after T.J. Maxx."

"Nana, want to walk over there and go to KMart?"

Once in the car with our packages in the back and seat belts fastened came, "Nana, is that the bathroom pass you used when you went in the woods for four days?" 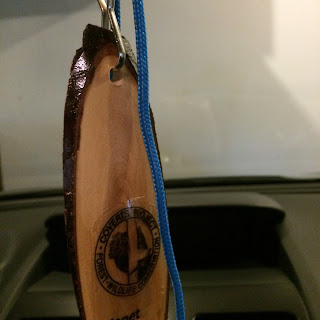 Telling her that it was, in fact, how we identified each other by wearing them around our neck during the seminars, she still insisted it resembled "the bathroom passes we have at school."

(So if my friends from Great Mountain read this, please do not be insulted.)

I came to the conclusion that day that second graders are quite intuitive and excellent readers.  Mia read an entire book to me called The Princess in Black which really was exciting.

The trip home revealed yet another revelation from my six year old granddaughter..."Nana, I've been thinking about it and I know how the town you grew up in got it's name.  All the houses are made of wood, so it was called Woodbury!"

This old man, he played three...he played knick knack on my knee with a knick knack patty whack give your dog a bone, this old man came rolling home.

Stewart M said…
Nice post - but just remind me - who is in change?!

Linda said…
Although I always enjoy your blog posts, this is one of my favorite ones! Linda@Wetcreek Blog
October 12, 2015 at 7:03 AM

Lorrie said…
What a great recap of a day with your charming granddaughter. Such fun. Conversations with the young are full of delight.
October 12, 2015 at 5:22 PM