Fall clean-up...something we all seem to enjoy with the cooler more tolerable temps.  So when we began and I spotted this bush, I knew what I had to do especially since neither the Pres nor I had any idea what it was.  Using those two invaluable resources I met (the ones I call Nancy and Lindsey), I emailed them a pic and found out that this is a good bush. 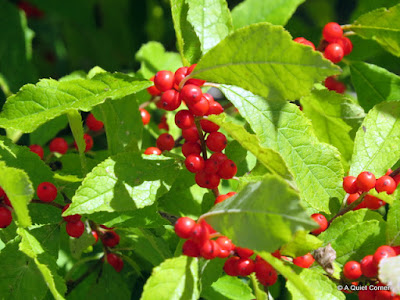 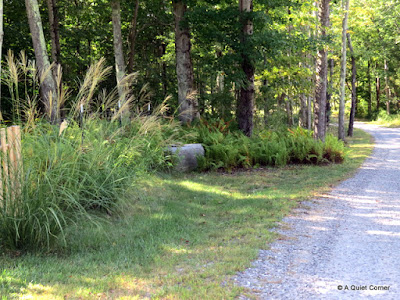 As the Pres and I worked to do a little clean-up of our own, we got to the Sensitive Ferns and I explained that the reason they are called that is because they are the ferns that are "sensitive" to even a light frost.  Did you know that?

Telling him to leave the fern fronds alone that look like they have brown beads on them and let them remain standing, he didn't even bat an eye. 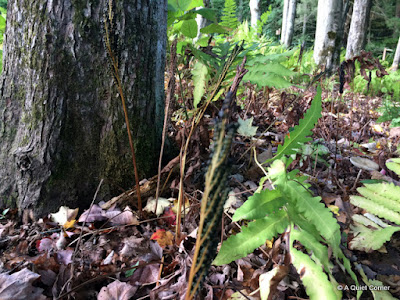 Spent Sensitive Ferns leave plenty of seeds for the birds and those wild turkeys to nibble on so let them stay during Fall clean-up.  Oh, and if you collect seed from your perennials like I do, don't take it all.  Leave some of those seed heads on the Shastas, the Black-Eyed Susan, Tickseed and Coneflower.  It feels good to share...:) 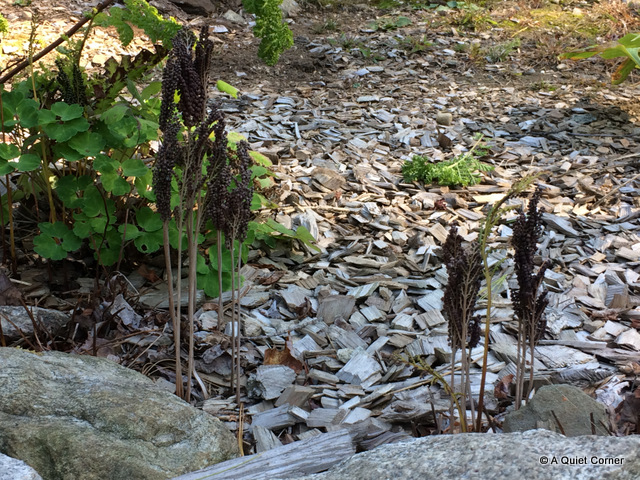 Sharing Mother Nature's Nourishment
with you and those at

eileeninmd said…
Lovely images, I have some of the Winterberry here too. It is a splash of pretty color. It is great that the ferns have seeds for the birds. Happy Monday, enjoy your new week!
October 19, 2015 at 9:44 AM

Ann said…
Fall clean up is something I've always thought about doing but somehow never get around to. I end up cursing myself every spring when I see what a mess it all is
October 19, 2015 at 9:59 AM

Florida Farm Girl said…
Much to my hubby's chagrin, all my flowers still have spent seed pods on them. I figure the winter birds will make short work of them.

MadSnapper said…
great lesson here on how to feed the wildlife.. and that bush is beautiful plus food. so are the ferns gone to seed
October 19, 2015 at 12:39 PM