While brewing my coffee Saturday morning, I walked over to the slider and peering out into the darkness, I inhaled deeply.  I noticed how brightly the stars shone. Cold, crisp air does wonders for the sky and the soul, I thought.

Something told me to return to the slider a short time later.  In the predawn hours, it was then that I saw what I thought may have been that the loud crash I had heard the night before. High winds whipped though our part of the state Friday night
and then again all day Saturday.  Mother Nature had felled a pine on our neighbor's property.  Perhaps I should plan on gathering pine later that day, I thought. 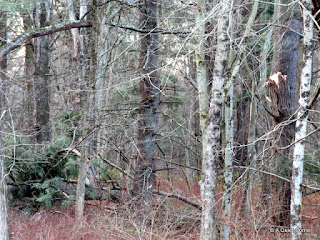 There it was, lying on the ground  snapped off from the wind as it blew fiercely along the ridge.

(I'd have to remember to point it out to the Pres when he got up.)

I never got around to gathering pine that day...just too busy.  Besides, I knew it wasn't going anywhere. 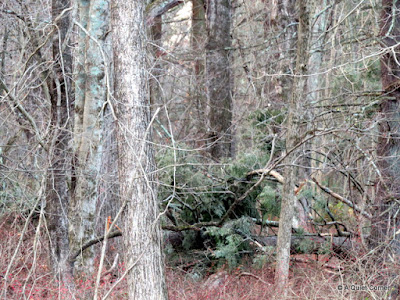 A day later, on Sunday morning, in the predawn hours, while outside with Moon and Copper, I spotted the dark silhouette of an adult Eagle flying low through the woods.  It was not yet light enough for me to see a white head or tail. Silence and total stillness followed.  Meanwhile, the dogs (now wanting their breakfast) and I went in.

A short time later, I watched the Eagles from my dining room slider and deck.  Working together and in silence, it was a team effort. Judging from their repetitive flight patterns in and around the nesting area, I assumed they were gathering sprigs of pine for their nest.  I actually saw one land in a nearby pine, tugging to pull a small sprig off.

Sprucing up their nest is something they do this time of the year. Once their work is completed, they know that it will be seen by other Eagles as "occupied" and more importantly, is ready for them when mating season approaches during the Winter months.

Later that day, I walked in when there were no signs of them. 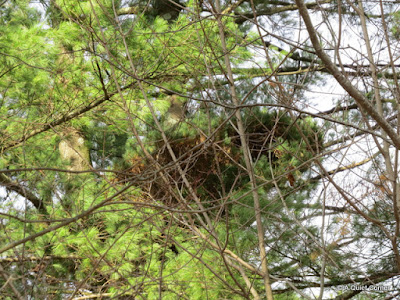 Since that morning, one thing I have been thinking about. Once the sun rose, they stopped gathering pine, which made me wonder.  They must know that they know that they are more visible when the sun is up, especially when basking in the sun.

Bee Lady said…
At least they don't have the worries of a turkey this time of year!
Happy Thanksgiving!
Cindy Bee
November 25, 2015 at 6:27 AM

eileeninmd said…
It is neat seeing the eagles prepare their nest. Cool shot. Have a happy day!

MadSnapper said…
I love that last shot of the blurred eagle behind the trees. beautiful. i did not know they gathered pine, here the nest look like dead sticks
November 25, 2015 at 11:53 AM

Stewart M said…
"watching eagles from the deck" - do you know how jealous I am!

What a great part of the world.