Hats Off To Martha

Do you remember my Crown of Thorns houseplant? It was in an arrangement given to me by one of my branches at "the bank" in 2003 as a going away present. As each of the seven plants from the arrangement flourished and matured, I gave each it's own pot. Some have grown so much that the seven have now become twelve!  Anyway... 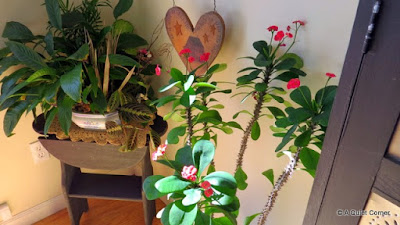 This year, I decided to take the advice of Martha (Stewart, that is). Appearing on one of the morning news programs, she was giving advice to a woman who brought her Crown of Thorns plant with her for help. The woman's plant resembled mine...multiple stalks, rather spindly, tall and leggy with little growth along the stalks...yet all healthy.

Watching Martha remove the potted plant from it's pot, I cringed and then saw the look of concern on the audience member's face as Martha cut off all the crowns and discarded the tall, leggy, thorny stems. The woman looked mortified and to tell you the truth.  I was too as I watched and listened.

So this past Spring, when the Pres was ailing and I was given the opportunity and time, I took my plant out on the deck and began dissecting it. Martha had told the audience that you can root just about anything in sand as long as you keep it moist. Well, Martha was right! Wearing my heavy leather rose gloves, the five crowns I cut off were placed in a four inch deep pot of sand and placed in an Eastern window. They were watered regularly. Days...weeks passed. Finally it was time for me to transplant them. 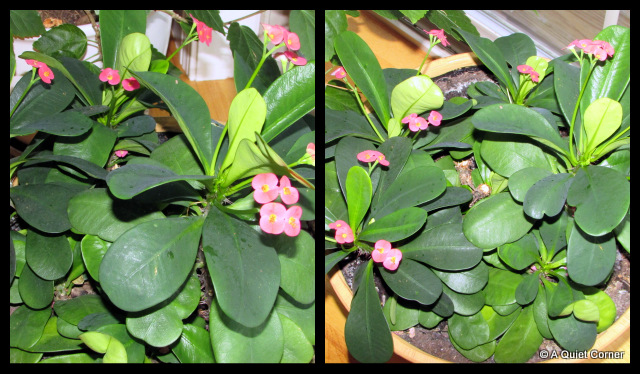 Look at my Crown of Thorns now...:). Full and compact, the pot is in front of my slider which gets Southern exposure and, like my other houseplants, gets watered weekly. 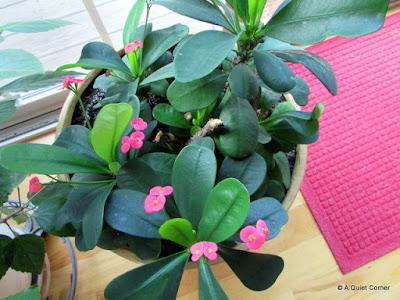 I do have a question for all you plant people out there though.

Do you think I should "pinch" the tops occasionally like I do with perennials?

Ann said…
I have no green thumb at all so I'm just in awe of the fact that you still have plants that you got in 2003. Your crown of thorns looks awesome since it's repotting
November 23, 2015 at 6:35 AM

eileeninmd said…
Good morning, they are lovely plants. The flowers are cute. I wish I had a green thumb. Happy Monday, enjoy your new week ahead!

Cranberry Morning said…
Good for you!! What beautiful plants, and the key for me is remembering to water any little cuttings. :-) I'm not familiar with that plant. Think I'll track down one next spring.
November 23, 2015 at 8:51 AM

Cranberry Morning said…
Good for you!! What beautiful plants, and the key for me is remembering to water any little cuttings. :-) I'm not familiar with that plant. Think I'll track down one next spring.
November 23, 2015 at 8:51 AM

MadSnapper said…
they are all beautiful and if i did that they would all be dead. you have The Touch
November 23, 2015 at 9:39 AM

Donna said…
I am not much with house plants but you have really done well with this plant...here is a link I found that may help you with your question....

Brenda @ Its A Beautiful Life said…
Oh how lovely to have it all turn out right! It's a good thing indeed.

Enjoyed your story today, thanks for sharing.
Brenda