As Nancy and I walked around the yard along the fence-line, there was no need for me to point out the thickets of invasive species that we are hoping to eliminate. Coming across a Bittersweet vine climbing the fence, she stopped and gasped. "What is that and why is it still alive?" 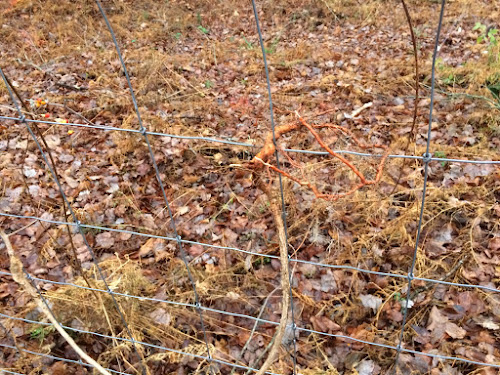 "Nanz, I left it there intentionally knowing you were coming by...LOL...I wanted to see your reaction. So tell me how can we try to eradicate things like this without the use of herbicides and/or physically digging them out?"

"Cut it. Keep cutting it. Get rid of it.  Cover it, restricting, eliminating the opportunity for photosynthesis to take place."

A few days later, I returned to do just that. Those pieces that I couldn't pull out, I cut with the pruners, then covered them with weed mat, leaving them buried in total darkness. Oh, one more thing. Before she left, we went in to hang out for a while. I wanted her to meet the dogs (who she loved!!) and have some nibblies I'd made. Admiring the house and the way it was decorated, she stopped rather abruptly facing the dining room.  Pointing to the artificial Bittersweet that I have in the kitchen and dining room, she said "eeeeeeewwwww, what s that? You have it in your house? JP, think about the message you're sending." 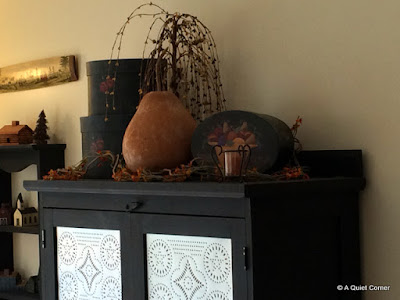 A several hours later, after Nanz left, I thought about what she'd said.  I felt bad.

Then I decided that decorating with artificial Bittersweet was the right message.

It is fake.
It is not rooted, no longer endangering the trees it strangles out in the real world. It is not going to spread. It is contained. Besides, I like it in my house...:) 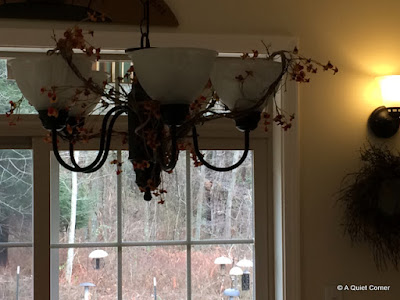 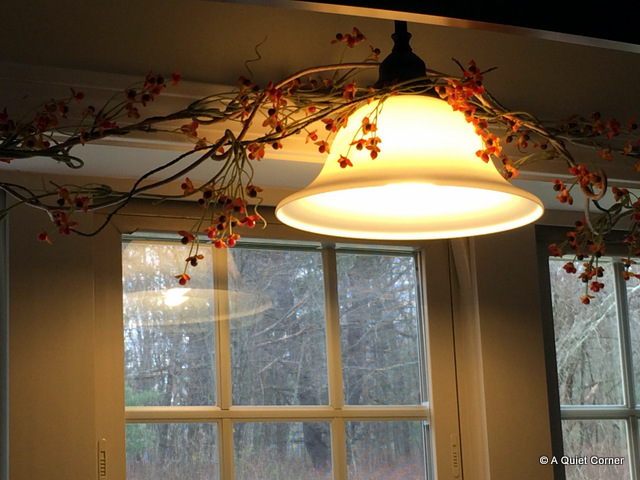 eileeninmd said…
Hello, I think the light decorated with the bittersweet is pretty. If it is fake, why not. Happy Monday, enjoy your new week!
November 23, 2015 at 7:43 AM

Lisa @ Two Bears Farm said…
I KNOW that your décor is always adorable and welcoming. So indeed, it must look wonderful.
November 23, 2015 at 8:25 AM

E. said…
friendships are tough to me, i have found a lot of the folks i did hang out in the past are not in my life any more ... i have always felt i give a lot to a friendship and try to be a good listener. but in the past i have been told i say certain things that are not cool. but i think you have to be honest, i want folks to be honest with me, i guess i hurt their feelings but why not say so ... because that person will never know unless you say so. you know? that is what friendship is ... being able to be truthful and honest.

there is a word i am looking for to describe your style there, farmhouse living. oh pooh why does my brain fail me? i love it. i wish i could do it in our house but we have a more not even sure what to call it. but i love it. you enjoy it. have a great week. ( :
November 23, 2015 at 9:15 AM

Gail said…
Does it encourage the outside plant to grow?

Ann said…
If she's willing to look at your decor and say the word "eww" to your face, I'm pretty sure she'll continue to be your friend if you keep it. I think so long as the real stuff can't see the fake stuff inside you're safe :)
November 23, 2015 at 11:26 AM

Anonymous said…
She sounds like a pretty solid friend to me. Personally, I think that vine epitomizes strength and survival...not a bad emblem for the home.
November 23, 2015 at 1:07 PM

NanaDiana said…
Oh- and to think I went all over this part of the state looking for bittersweet this fall. I love it- and I know it can be invasive but here it has almost been eradicated. I have always loved the way it looks since the first time I saw it.
How funny about your grandmother though...and her "bittersweet" take on it. xo Diana
November 23, 2015 at 9:35 PM

EG CameraGirl said…
I'd like to know whether the bittersweet vine in your yard is the Asian variety or the one indigenous to your area. It's the Asian variety that's invasive. And the fake variety is not invasive at all...AND attractive where you put it. ;))
November 24, 2015 at 7:49 AM

Florida Farm Girl said…
I like your bittersweet in the house. I know nothing about how it grows, though.
November 25, 2015 at 3:50 PM

Rambling Woods said…
I have found that people are passionate about certain things..maybe gardening.. maybe something else... but your house is for you to enjoy...Michelle
November 28, 2015 at 8:12 PM