While outside last Tuesday morning with Moon and Copper, a bunch of crows were carrying on and on. Their noise was incessant...incessant to the point of distraction. Thinking it was either the Barred Owl or the Red-tail Hawk they were bugging, I really didn't pay much attention until I watched where they were concentrating their efforts. They were on the outer edge of the Eagle's nesting area. 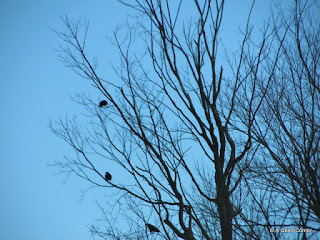 Then spotting a "blob" through the trees below and to the right of the crows, I went in through the slider and grabbed the camera. I should have grabbed the binoculars as it was close to 400 ft away, but the camera was closer and my feet were all muddy. Anyway, I'm glad I got zoomer because I watched it for an hour and a half making a mental note of where the tree was located. 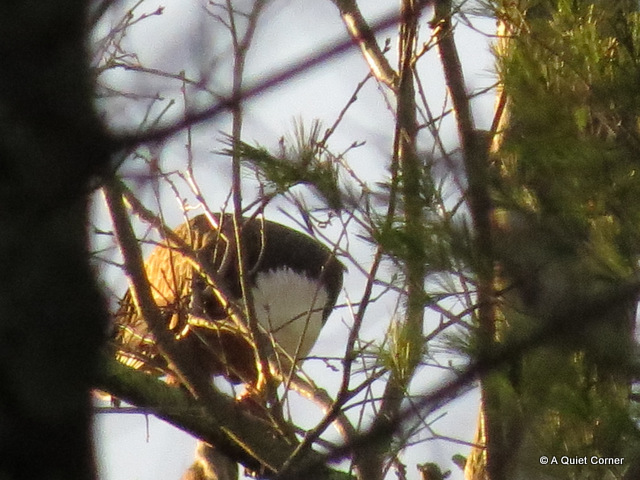 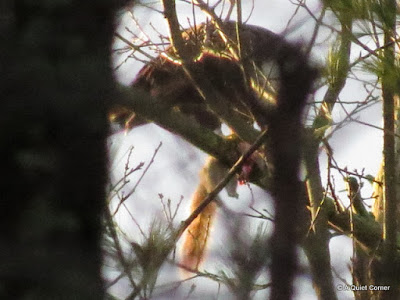 Watching the adult Eagle devour it's breakfast then preen afterwards was wonderful let alone a first, (although my neck was killing me for a few days afterward since I was crouched and curled in a very awkward position).

The following day I walked through the woods and tangled barberry to the base of the tree hoping to find a few remains of the squirrel...a tail, bones, something.

But I found nothing. Nothing but poop (which I also observed...LOL...another first for me!

Sharing a few firsts for me with you and those at

Oh, one more thing. Although not a first for me, I was invited to partake in the Mid-Winter Eagle Survey again. Last year, when we met at 5:00am, it was -8 degrees but the bitter cold vanished when I saw my first Eagle of the day.

eileeninmd said…
Great sighting and images. I wish an Eagle would come and take some of my squirrels. I have way too many here.

Mimsie said…
What an exciting life you lead compared with we folk in suburbia. Lovely shots of that eagle. What a fantastic bird it is.
December 23, 2015 at 7:32 AM

Sandra said…
i can feel your excitement flowing from your post. so happy for yuu that you did not miss this.
December 23, 2015 at 10:21 AM