When I asked the Pres to come with me into the woods and cut some of the branches from the downed hemlock, he looked at me and said, "Oh, you're going to make some decorations to hang outside for Christmas?"

"No, I am going to build some shelters for the birds near the feeders."  His response was total silence, then, "Hon, the feeders are right near the trees.  They have plenty of shelter."  "But not the birds that are ground feeders," I said.  "They need a quick place to hide."

Off we went carrying the lopers and pruners walking through the briers.

And so we snipped.  Then we carried all the branches back to our yard.  The next morning while the dogs were busy doing their "thing," I walked back and forth from the pile of branches.  I know it doesn't look like much, but I was hopeful that the birds would "make it work." 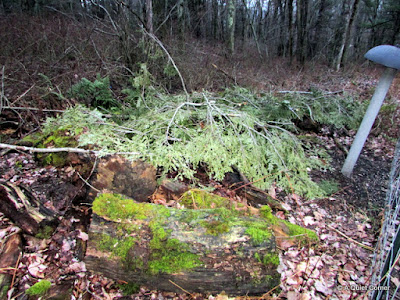 Strategically I put down some old pieces of wood that would give it a little height.  I intentionally catered to the short birds because, I mean come on now... When was the last time you saw a tall bird at a feeder in this neck of the woods??...LOL

Then I placed the branches, trying to build them up a little over the chunks of logs already on the ground.

Well, looking at it from the house, it really didn't look like much and definitely was not anything pretty.

However, about a week later....

Mother Nature gave us a little slushy, icy combination Monday night into Tuesday morning and I not only got to drive the Subaru for the first time in bad weather, but also got to watch the locals pop in and out of the small hiding places that formed with the branches. 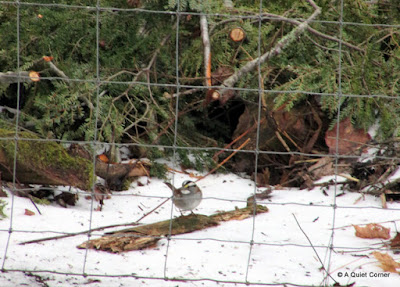 Well, this morning, while working on that had to have puzzle (UGH!!!) and before heading to Newport to drop off goodies to my daughter, I spotted a few of the locals playing hide and seek. 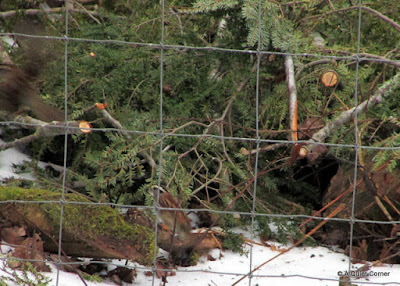 Can you spot the little guy? The Black Capped Chickadees were just too fast for me but then again, we have all Winter. 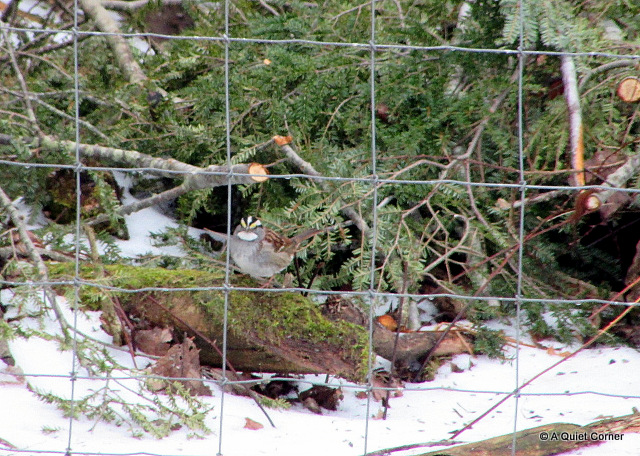 Watching the Sparrows and Chickadees bobbing and weaving through the hemlock, I knew they were making it work for them.  Doesn't it just amaze you what a few scraps can do?


Sharing a simple idea for how your yard-birds can play hide and seek:

Ann said…
That is a good idea. I wonder if my neighbor would notice branches missing from his hemlocks and laying under my bird feeder :)
December 31, 2015 at 4:41 AM

Chris K in Wisconsin said…
If anyone has a "real" Christmas tree, it is fun to lay it outside by your feeders, too. Don't take it out to the curb when you are done using it, it works as a shelter for the birds if you just lay it down or prop it up near your feeders. It is so much fun to watch the birds darting in and out. When the weather outside is frightful, they use it, too. As you said, those bottom-feeders love having some protection.
I love your blog! I live about 3 blocks from the Wisconsin River, and we have many Eagles that winter here every year. We have a large dam in town, so the water is always open for them. It is amazing to watch them feed as they fly in for the fish.
Happy New Year!!
December 31, 2015 at 10:49 AM

Wally Jones said…
Nice work! Your guests seem to like it just fine. Thank you for sharing a good idea which worked well.
January 1, 2016 at 4:12 PM

Anni said…
Great!! The last one of the chickadee is so well framed! Gotta love it.

Thanks for sharing the link while I was on holiday blogging hiatus. Hope to see you link up again often during 2016. Your photo contributions are always valued!!
January 2, 2016 at 4:19 AM