More Than The Bird

I know you all know how important protein is for our bodies and if anyone has drummed that into my brain, it's the Pres. However, his theory was brought to a screeching halt...on Thanksgiving Day no less. This is what happened...

The kids had just arrived. Just as my granddaughter opened the front door and popped her head in, pointing to her recently pierced ears, we lost power. Yep, while the appetizers looked lovely set up on the island and I began greeting and taking bags and coats, we lost power.

"Hon, the power just went out. Can you go start the generator?" I said.

The Pres was watching TV when the screen suddenly went black. Looking in my direction over the heads and through the kids, he replied, "Why?  We don't need it yet."

"Hon, I have food cooking in the oven and on the stove...the stuffing you like, the green bean casserole, the potatoes and the biscuits are all in the oven."

His answer was concise and rather arrogant, "Well, the bird is ready." (We have been deep frying our turkey for years and love it that way!)


Again I said, "Honey, I have the stuffing, the green beans and the biscuits baking. The turnips and mashed potatoes are on warm and the gravy and corn are not done yet. Go start the generator!"


Grumbling "Oh" as he headed out the door with my son, I thought "Did this cave man think that we only needed the bird?

The Pres started the generator which was more than enough to power up the stove-top and the oven so the cooking and baking resumed.  Our feast was placed on the island and everyone helped themselves...including the Pres, who took much more than just the bird. 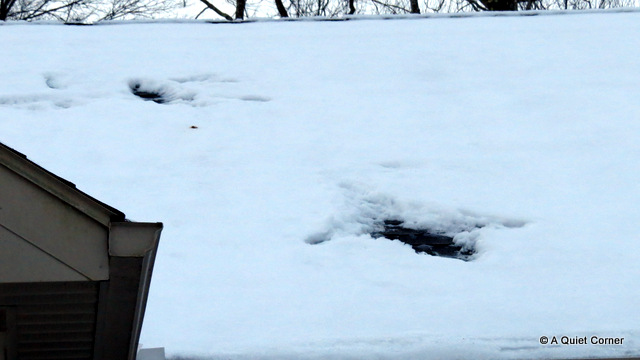 Oh, one more thing. The power was out for about two hours. One hundred seventy two customers were affected and I couldn't help but feel bad for those who had no generator.


Oh and one more thing.  The photo is that of the imprints left by a TURKEY that apparently mistook our roof for the ground last November.  Don't worry though...she was fine.
Email Post
Labels: Fall Family Holidays

Pamela Gordon said…
Now that was an exciting Thanksgiving dinner and how great that you had the generator to help finish the food prep. I'm sure others were a bit miffed at losing power that day.
December 2, 2015 at 8:45 AM

Sandra said…
we had a TG like that back about 12 years ago and had no generator. we had to wait for the power to come back on and cook then, i loved fried turkey even more than baked.
December 2, 2015 at 10:58 AM

Ann said…
Good thing you had the generator. That's the pits when the power goes out when you're cooking.
December 2, 2015 at 5:11 PM