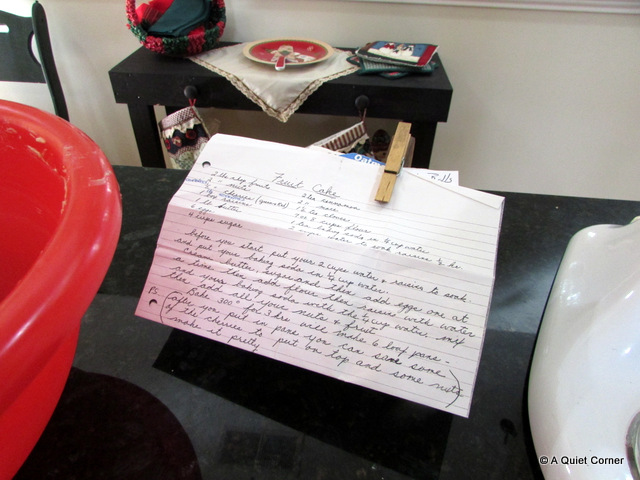 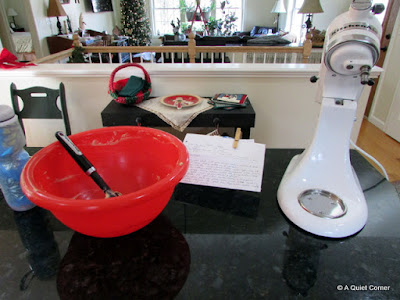 I knew there was a problem when I saw the batter nearing the top of the 4 1/2 quart stainless mixing bowl and still add more ingredients to add! So, after transferring the thick, fragrant beige colored batter into the largest bowl I own, I became concerned.  So I did what any baker would do. I took out more pans and prepped them too. 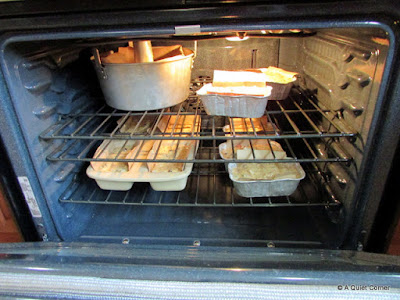 Well, nine small loaf pans and a ten inch tube pan later, they were placed in the convection oven, following my MIL's directions to the letter. Hesitant to set the time to 3 hours as her instructions said, I did, knowing she was a great cook and everything she made was just heavenly. 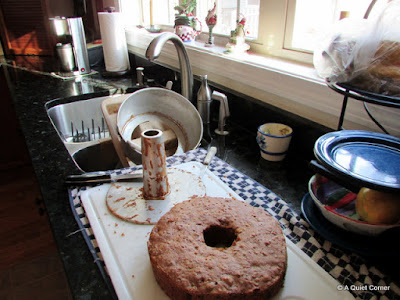 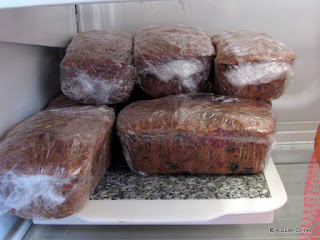 Soon the entire house was oh so fragrant. Three hours later when the timer went off and I placed the treasures on the island to cool, I knew one of these would be the perfect gift for my fruitcake loving friend.

But it was when the doorbell rang that I knew I would have my concerns about it's flavor taken care of.  It was OS (Other Son) who is the best guinea pig taste tester ever.  He was more than willing to give it a try!  In fact, he ate one entire small loaf!!

Now because I had so many, the following day when I went to the gym, I asked my friends who liked fruitcake. Believe it or not , I now have a list of recipients who were willing to help me out!

Whatever you do this Christmas, do it from the heart.
It makes the perfect gift.

Linda said…
What a great Christmas story, JP! And the fruitcakes look devine! I won't ask for the recipe, since I am the only fruitcake lover in our family. Have a very Merry Christmas! Linda@Wetcreek Blog
December 24, 2015 at 7:10 AM

MadSnapper said…
they are beautiful. my mother made hers in the round pans with the whole in the middle and her one mix up made 4 of those... she baked them right after thanksgiving and stored them in tins...
December 24, 2015 at 1:11 PM

E. Beth. said…
Merry Christmas to you!! i love seeing what is cooking (baking) it folks ovens. i have been doing cookies, pumpkin bread & did a couple sweet potatoes the other night. got to plan tonights supper. i have a no clue moment. nuts!! ( :
December 24, 2015 at 5:12 PM