It was almost like any other Friday morning.  Almost.

Sure I left much earlier than I normally do but I thought by getting my workout in early, I would be home early...early enough to make a small batch of Apple Crisp for us and cook up the chicken for the dogs.  That was the plan.

However, that plan just wasn't meant to happen because...

Noticing how early it was after my workout, I thought "Great, I'll be home nice and early, get everything done and then take my nap."  Turning onto the small side road the Pres and I use, I began to accelerate to make the hill and curve.  But coming from the opposite direction...coming down the hill (very fast, I might add), a small, red, older model car with four young people apparently couldn't quite make the corner. Perhaps the drive tried to steer and over-corrected.  We'll never know.  But, the back end of their hit the guardrail on their side of the road causing their car to spin and launch across the two lane road...right into me. 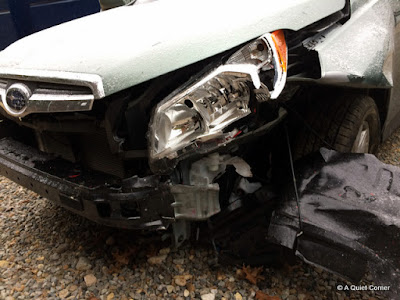 It happened so fast and my mind keeps playing the video of their car coming towards me as I tried to avoid them.  But, I couldn't.

They plowed into me with such force that their small, two door pushed my Forester off the road onto the grass.  Air bags deployed all around me and suddenly I found myself sitting, inhaling deeply over and over as I watched four young people climb out of the small, two door, red sedan.


People stopped to help...I wish I knew who they were so I could thank them.  Someone called 911.  The ambulances transported the four young people and myself to the ER.  Wearing the neck brace the EMT had placed on me, waiting for tests, scans and more tests, it was now time to go home after being at the ER for 7 hours.

The four young people...well, I hope they will be fine too.  Yesterday at the ER, shards of glass were being extracted from the arm and face of the young girl in the front seat while the driver's enormous hematoma on his head seemed to be under control.  Neither were wearing their seat-belts, I was told.

Banged up and still very sore today, I will be fine, thanks to my Subaru Forester and it's airbags.  Yes,I will be fine even though accidents happen.

Sandra said…
so glad you are ok and not in the condition of your poor new SUV.. that is what we have been discussing about accidents. even those who are really careful drivers there is always the people who are careless to take us out like bowling pens. and that is on our streets that are dry and sunny. cell phones are as bad as ice and snow. the interstate in KY has 86 miles of stranded motorists. bob said if there are 40 cars with snow tires and 3 cars without, the 3 can back up the ones who can move.
January 24, 2016 at 7:27 AM

chasing the sun said…
I'm glad you are okay, even though you are sore! My most memorable auto accident was bizarre but relatively minor..Single vehicle, only me....A front tie rod broke, right passenger side, which made me lose control on a lonely hilly country road..My car rolled onto its right side into a grassy muddy ditch, on my side of the road ..An open bag of Fritos had been in the car, so Fritos flew every where..This accident happened in the late 70's, pre cell phone days..I was all alone..I was able to walk away from the accident... I made my way to a farm house which was about 100 yards away..The lady who lived there was very kind..She gave me hot tea and let me use her phone so that I could find help to deal with my car..I felt fine..My only injury was my R thigh, it was bruised and sore from being slammed into the gear shift console during the rollover.. Because the ditch was soft and exceptionally muddy, my car wasn't totaled but it was not drivable..Car had to be towed away from the scene of the accident, but no police were involved..Damage to my car was the broken tie rod, a broken radiator and some dents :-)
January 24, 2016 at 7:53 AM

eileeninmd said…
Wow, I am so glad you were OK. Accidents are scary, especially when the air bags pop open. Drivers should be slowing down on the curves, especailly if the roads are just wet. Take care, I hope you are not in pain! Happy Sunday, enjoy your new week!
January 24, 2016 at 8:16 AM

Susie said…
Driving experience is a good thing to have...but at times nothing can help. I really hate blind corners, bends. I am so glad you are going to be okay. Hopefully the young ones will be also and hopefully they learned a lesson. Praying for you, xoxo, Susie
January 24, 2016 at 9:00 AM

Buttons Thoughts said…
Oh I am so happy you are OK. That had to be very frightening. The young people are never going to forget that and not wearing seatbelts in this day and age is not cool. Airbags did their job thank goodness. I do hope you are napping now. Hug B
January 24, 2016 at 9:50 AM

trav4adventures said…
Oh, gosh! I hope you are okay. I have friends who have a Subaru and they absolutely LOVE IT! Nice, safe car. Frankly, I'd love to get one after my Honda CRV gives out...
~Cheryl Ann~
January 24, 2016 at 9:50 AM

Anonymous said…
Every drivers worst nightmare. Thank God you are all right...sore and bruised yes....but fundamentally all right.
January 24, 2016 at 10:54 AM

Florida Farm Girl said…
JP, I'm so sorry to hear of your accident but very happy to know that everyone came out without really serious injuries. Though only split seconds elapse the time does seem to just freeze, but you can't do anything about it. Hope you recover quickly and totally.
January 24, 2016 at 12:29 PM

Ann said…
a scary experience to say the least. Glad to hear you're ok. I always say that I know I can get where I'm going safely, it's the other guy on the road that I worry about.
January 24, 2016 at 3:59 PM

Beatrice P. Boyd said…
So sorry to read this post about the accident, JP, but so glad to read that the SUV was the most damaged and not yourself -- thank goodness for airbags. Sandra was right when she said careful drivers can't avoid accidents caused by others. Hope your bumps and bruises heal quickly as that was a harrowing experience just from reading it.
January 24, 2016 at 6:01 PM

Betty said…
Oh dear...fortunately it wasn't any worse. Can your car be fixed? Sometimes it's worse than it first appears. Hope all your aches and pains go away quickly. What were those kids thinking not wearing seatbelts?
January 24, 2016 at 7:49 PM

~Kim at Golden Pines~ said…
It really is like everything is moving in slow motion, and the sounds are really like nothing else! I'm so sorry this happened, but like everyone, I'm glad you're okay! I hope you're not having too many post aches and pains! Take care, and know that I'm sending some healing vibes in your direction!
January 24, 2016 at 10:25 PM

Rambling Woods said…
Oh no.. I am glad everyone is ok. My husband responds to many car accidents via the volunteer fire company and wearing seat belts saves lives...
January 26, 2016 at 9:51 PM

Ida said…
Oh my gosh that had to have been super scary. - I'm so thankfuly to hear that you came out relatively okay and that no one was hurt seriously. Hoping you are feeling better everyday.
January 27, 2016 at 12:53 PM