Next time (if and when there is a next time), I'll be sure to read the small print on the box because.... 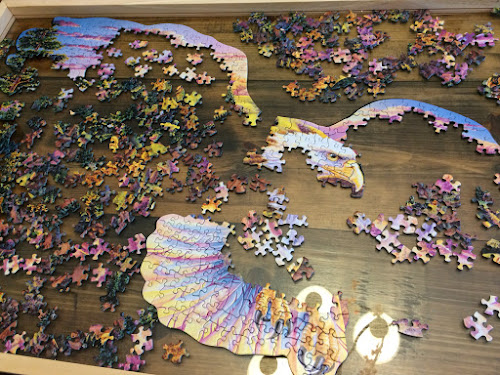 Although we began before Christmas, not much was accomplished. So, since Christmas and as of this writing, this is pretty much where we're at.

Well, we thought it was really coming along, until OS ("other son", our builder) came over the other night.

Once I showed him what we'd been working on, he sat right down and began studying the puzzle.  Like the analytical person that he is, his eyes moved quickly to the box sitting at the end of the table.  Focusing on the picture on the box...after he read the small print, he got my attention when he said, "Did you see the Puma's head?"

"What Puma?" I answered quickly  stepping down into the sunken room.  Wondering what he was studying while I was busy packing a goodie bag for him and "the boys" who built our house and garage.

"Right here, hidden in the mountain...down and to the right of the fox."

"Fox? What fox?,"
I said now standing next to him as he pointed to it in the purple mountains with his index finger. (see it under the visible brown bear to the right of the elk?)

Well all I can say is after several expletives later, the Pres and I discovered that not only are there visible animals...26 in all  (mountain goats, an elk, two brown bears, other eagles, as well as Indians on horseback, a cluster of wild turkeys, wolves)..but also within the wings of the Eagle, there are supposed to be 14 hidden animals.

So far, we've discovered (note and emphasize the word "discovered" on the box NOT yet put together: a squirrel, an owl, a big horn sheep, the puma, a wolfs head, the fox,  crows, an eagle, what looks like the head of a bear cub (?), buffalo, a white howling wolf, a snow-owl and a swan. 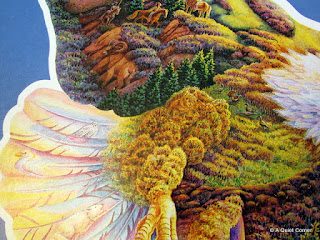 Next time...if there is a next time...I will read the small print...because as of this writing, I have found three four eyeballs that belong somewhere!!

Did you spot a few critters?

Sharing the puzzle in my life with you and those at

eileeninmd said…
Good morning, what a cool puzzle. Yes, I found a few of the hidden animals. The Puma's head under the bear is really cool. Thank you for linking up and sharing your post. Have a happy weekend!
January 9, 2016 at 5:50 AM

Ann said…
If it makes you feel better, when I read puma my first thought was "puma? what puma?" when I looked at the picture.
Go find owners for those eyes...lol
January 9, 2016 at 6:27 AM

EG CameraGirl said…
This looks like a hard puzzle but how wonderful you will feel when it's completed! Glad your son gave you a heads up about all the animals. :)
January 9, 2016 at 7:06 AM

MadSnapper said…
the picture of the box i only saw 2 eagles, a goat and elk and bear. i did finally find the cougar. and a lot of others, that should take you a long time to finish.
January 9, 2016 at 9:23 AM

Susie said…
Oh I love that puzzle...so interesting. I would not be able to rest till I found all the hidden creatures. Blessings, xoxo,Susie
January 9, 2016 at 10:53 AM

Gayle said…
In the end looking for pieces of the animals may make the eagle easier to assemble.
It's definitely puzzle time.
January 9, 2016 at 11:34 AM

Barb said…
I bought an intricate puzzle a year ago so we could work on it while some of our grands were visiting. A couple months (and many headaches) later, I threw it away. It was still only about 1/3 finished.
January 9, 2016 at 12:09 PM

Pamela Gordon said…
Oh wow! That is a challenging puzzle!! All those tiny creatures hidden in it. I see a white duck in the tail feathers of the eagle. ;) I'm working on a Thomas Kinkade puzzle and it's very slow going. I need your son's eyes here to help me I think. I got the outside edge all done but that's it. It will take me weeks, if not months, to finish it! They are fun to do and help pass the time though. Enjoy.
January 9, 2016 at 12:27 PM

Black Jack's Carol said…
I agree with the other commenters that that is a very neat puzzle! So neat, I'm getting the urge to buy one. I hope I'll resist the urge as I could use that time to write comments on the many wonderful critter-posts to be found here. Thanks for sharing some smiles and a unique collection of critters.
January 9, 2016 at 4:19 PM

Stewart M said…
Nice puzzel - but for me doing 1000 piece jigsaws is on step too far on the road to madness!

NanaDiana said…
LOL- Some poor blind animals are looking for their eyes and YOU have them! lol xo Diana
January 9, 2016 at 9:46 PM

Mimsie said…
That puzzle is more challenging than any I've undertaken over the year but very beautiful. I did indeed find quite a number of animals in the picture but I think the would be difficult to find on separate pieces. Do let us know when you've completed the puzzle.
January 10, 2016 at 1:23 AM