It was really nice here a few weeks ago.    The Pres said when we got home from grocery shopping (which now entails going to three different stores and seems to take forever), he would go outside and cut the branches that I've been bugging him about. 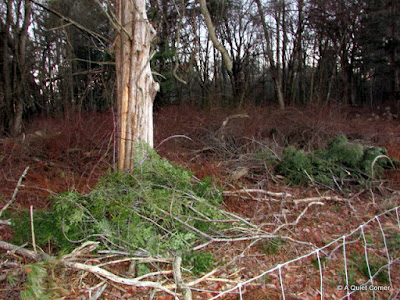 I wanted to make a few more hangouts for the birds since, "sooner or later Winter will come, Honey."

NOTE TO SELF:
Sometimes we women are so intuitive.

And it did.  This week it is freezing.  The winds made temps dip low...very low so I'm glad we made the hangouts when we did.  Sometimes that old "6 P theory" comes in handy even being retired.
I've been seeing a lot of Towhees, Chickadees and  Cardinals popping in and out once the light dusting of snow arrived.

Then, one day, as if they were watching what the Pres and I were doing, I received an email from the National Wildlife Federation.  Among the articles they offered was this:

Susie said…
We feed and water the birds here as often as we can. I will even throw out old bread when it snows. I leave all my flower brush up till winter is over ...the birds like to hind in there. Bless you and your family for doing the same. xoxo,Susie
January 18, 2016 at 5:51 PM

Ann said…
I bet the birds and other little critters love hanging out at your place. They get first rate accommodations
January 18, 2016 at 6:20 PM

Bee Lady said…
We never cut down our grasses and such until the spring so the birds have a place to hide out. And we also feed them.
I love the moss pictures! Moss is such a pretty plant.

Rambling Woods said…
Oh perfect. I would love to do that here, but I am sure my neighbor would make a fuss. They are wonderful for the birds... Michelle
January 18, 2016 at 11:46 PM

eileeninmd said…
Hello JP, it is cold here too. We are expecting a big snowstorm this weekend. I always try helping out my backyard birds. Happy Tuesday, enjoy your week ahead!
January 19, 2016 at 6:43 AM