It was a chilly, gray morning yet with temps in the mid-thirties, I knew I would be plenty warm with the new base layer thermal under my water/wind resistant hooded parka.  The Pres likes to know that I'm warm so, as he taught me, two pairs of socks were put on as well before I left the house.

Although I was told that my team leader was starting later this year because of volunteers who had to come quite a distance, I just knew I had to get to the river's edge early if I wanted to an Eagle.  After all, being given the opportunity to partake in CT's Mid-Winter Eagle Survey was something I looked forward to.  Besides, I had been up since 4:20 am, was dressed and ready to hit the road.

Arriving at the Fish and Game Club, I drove the Subaru close to the river and put it in park.  Facing the river's edge and with the engine still running, I spotted the unmistakable wing stroke immediately as it approached from the South.

Immediately pulling out me cell and dictating an email to the gentleman in charge of the entire excursion, it went something like this..."Bill...JP...I came down here early because I know my pair...an adult male just flew over the trees about 50' in the air heading North."

When my team leader and the rest of the group arrived, I told her of the sighting, knowing that it would be reported on her paperwork.  Time passed and we saw nothing so we moved on to our second location on our route.  Again...nothing.  It was time to move on to our third and final destination.

At 10:18 am, an immature (probably 2015's judging by it's coloring) following the river flew past us as we watched from shore.  Two minutes later, another immature (approximately 2 yrs of age) followed.  TWO IN TWO MINUTES!

Gathering with the rest of the teams for breakfast as we always do, Bill announced that our team did excellent, spotting three.  Then he told us of a possible new nest not far from you, JP.

Well, when I got home and told the pres, he said we'd go try to find it after I took a little nap.  Like a good little girl, I pulled the blanket over my head and dozed off, counting eagles. 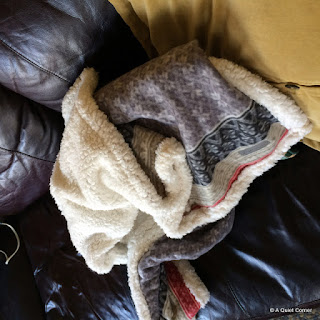 Sleeping for forty five minutes, when I opened my eyes, I said, "Are you ready?"
My gut instinct was telling me to go to that river and since I am directionally challenged, the Pres was going to be my designated pilot.

We locked the doors and climbed into the old red Dodge diesel.  Now almost near the intersection of the rivers that Bill talked about, I spotted movement on the river.

Getting out of the truck and impatiently waiting for traffic to pass, I crossed the road to snap a few.   Walking on ice, the female was apparently looking for fish while the male sat quietly. 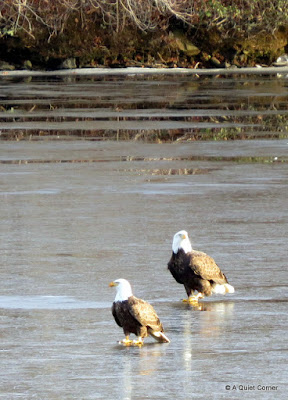 Look how much larger the female is than the male!  She looked around diligently watching the diving seagulls and Osprey while the male motionless.

One little note:
IF EVER you take photos of an Eagle, try to get a picture of the legs to look for bands.

Not sure if you can see them, but both Eagles have bands, which, when I sent the photos to Brian and Bill, they were going to try to identify via the database!  One has an orange band (MA?); the other has a silver band (US Wildlife).
How cool is that?

LOVE IS IN THE AIR
(or ON THE ICE) 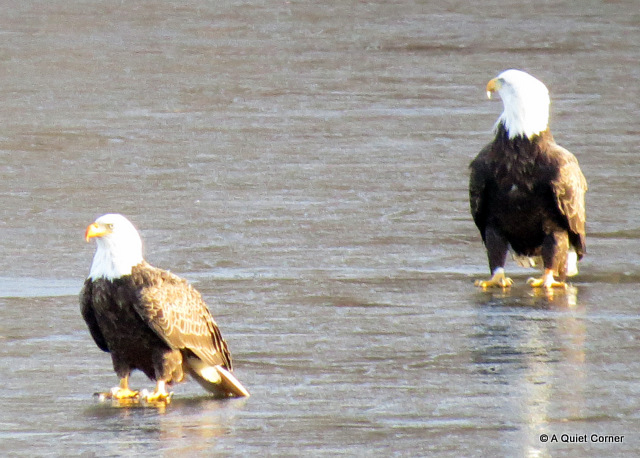 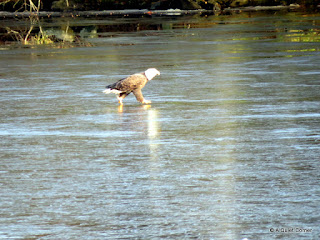 No, we didn't find the nest, although now we know where it is...thanks to another conversation with Bill later that afternoon.

Sharing my gut instinct with you and those at

eileeninmd said…
Hello JP, awesome sighting and photos of the Eagles. I am sure you will find the nest soon. It was good you followed your gut! Have a happy day!
January 13, 2016 at 7:41 AM

Pamela Gordon said…
What a great sighting!! And you got some great photos as well. I was driving the other day and saw what I thought was 2 crows on the ice in the river but as I got closer I could see white heads - eagles! Wish I had my camera and could have pulled over to photograph them.
January 13, 2016 at 8:41 AM

Rambling Woods said…
WOW! Great to see them even if you didn't find the nest. I occasionally have a banded duck or goose and I can never get the numbers even with the macro photo.... Michelle
January 13, 2016 at 11:03 PM

Anni said…
Be still my heart!!! What a glorious, majestic bird!! And your photos...sublime.

E. said…
awesome sighting. i love eagles. the one shots almost looks like he/she is walking on water. very cool. i have seen eagles often on our travels. but catching them with your camera is too too ggggrrrreat! ( :
January 14, 2016 at 8:58 AM

Debbie said…
awesome images and good advice on photographing eagles and looking for bands. i would wet my pants if i ever got this close!!!!
January 14, 2016 at 4:19 PM