The Santa in My Life

Knowing you are all probably weary of the mere mention of his name as well as the numerous Santas sitting in chairs while serving as centerpieces in local malls, the Santa in my life was different.  So, here's the story....

Leaning over to whisper in my ear while I peddled the elliptical two days before Christmas, my friend Mike said, "Are you coming by tomorrow morning?"

"I know.  But I hear you know who is supposed to show up," he said softly.

You see, four years ago when I met Mike, I called him "Santa," telling him he looked just like the real thing, he smiled as his eyes twinkled as he laughed.  Then, of course, I got to know him and what his real name was. One of the kindest gentlemen I have ever met, Mike, always made me feel "special", if you know what I mean.

Well, Christmas Eve morning, I got dressed as if I was going to my early morning workout and told the Pres I wouldn't be long.  Walking over to one of the ellipticals carrying his fruitcake, I couldn't help but smile.  Handing him the two oatmeal raisin cookies and asking his permission to take a few pix, I hugged him as soon as he stopped peddling and smiled. 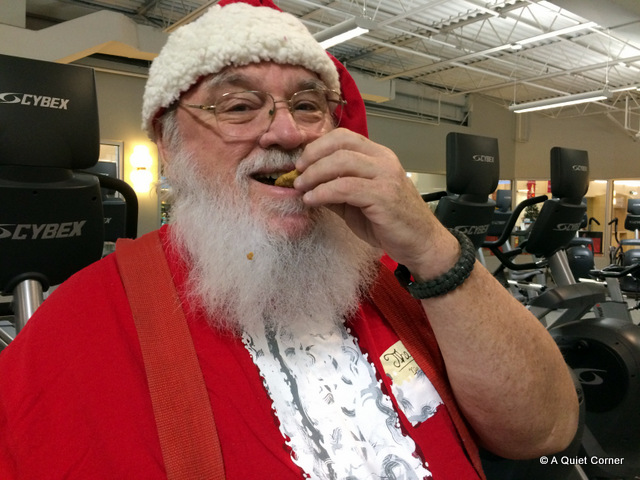 As he munched away, a single crumb fell onto his beard.  Telling him that I had to get a shot of Santa with a crumb in his beard, he was, as you see, more than accommodating.
Yes, another Santa has left his imprint on my life. 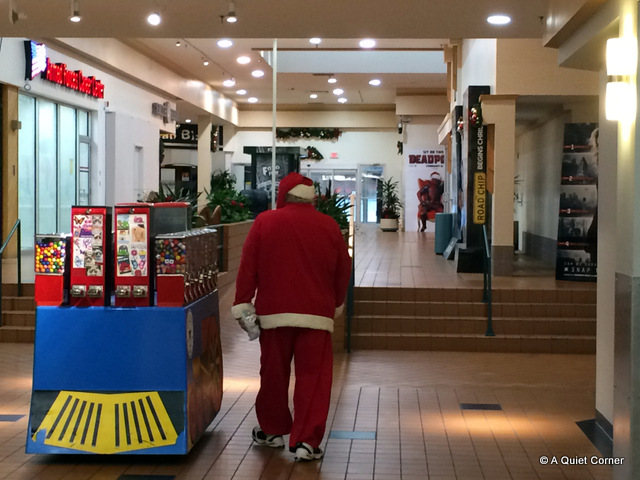 After eating his cookies, he put on his red overcoat and fastened the buttons across his big round belly.  Then he walked over to the front desk where he offered to pose with a few of us before.walking away, carrying his gift.

Then a few days later on my birthday, Mike appeared at the gym carrying a tin of homemade cookies...a gift from he and his wife.  Along with the container was a note, which I didn't open until I got home.  As much as I love cookies, it was the note that touched my heart. 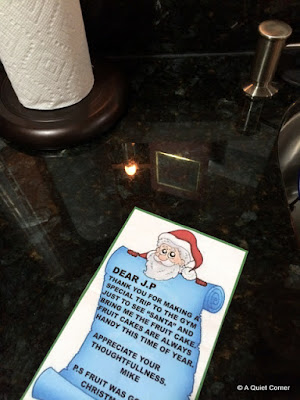 Sharing the Santa in my life with you and those at

eileeninmd said…
Good morning, what a cute story. Your friend Mike does make a fantastic Santa! Happy Sunday, enjoy your new week ahead!
January 3, 2016 at 8:13 AM

Anonymous said…
What a beautiful heart-warming story, one to keep dear to your heart for sure! Thank you for sharing with us! :)
January 3, 2016 at 8:29 AM

Buttons Thoughts said…
Oh I love this and it made me laugh because of my story on my blog:):) This is a sweet story about caring people and that is what it is all about. He does look real maybe he is. Hug B
January 3, 2016 at 10:16 AM

Blondie's Journal said…
I'smiling and will be for quite some time!!! :)