Will one of you just kick me in the head?!  Did you know that when you haven't worked out in 3 1/2 weeks, you cannot resume the weights and resistance where you left off!?

Hmmmm...on my first day back to the gym, I couldn't even finish all twenty machines that I normally do.  I ran out of steam!!  Sure,, the elliptical was not as bad as I thought it was going to be so I used that time to strategically plan my workout.  At least I did avoid the machines that use my shoulders because of the strain from the accident.  Yet all the other equipment I tackled full speed, using the same weights/resistance I had been  using a month ago.  One of the ab machines killed me, barely making it through two sets! 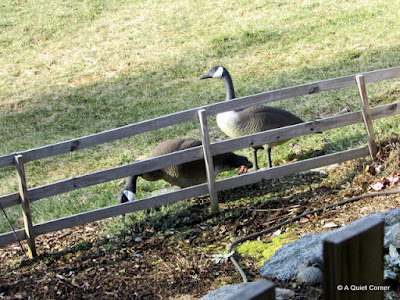 However that day, once I was home, my arms felt like rubber and the following day, my abs were killing me.  I couldn't laugh, sit straight up...gosh they were sore.

My second workout for last week proved much better and not as uncomfortable afterward.  Over the weekend I cleaned and baked.  I felt like Spring was on it's way with a renewed level of energy that I got from exercising.

Apparently I wasn't the one one who was in the mood for housework.  The Pres went to to do a few things in his garage  while I was outside with the dogs picking up some of the many branches that have come down because of the recent high winds.

Yet it's those same high winds that have helped melt our snow,revealing all sorts of new things coming up.  In fact, see the plant near the head of the "fake goose"?  I didn't plant it there. Good old Mother Nature put it there.  It is one of my varieties of Sedum...Antique Grill, which I got from a friend while I lived in Virginia.  Apparently, it likes "the North, Dorothy...LOL!  And speaking of Southern Plants liking the North, my Virginia Bluebells are coming up everywhere in the garden beds...:) 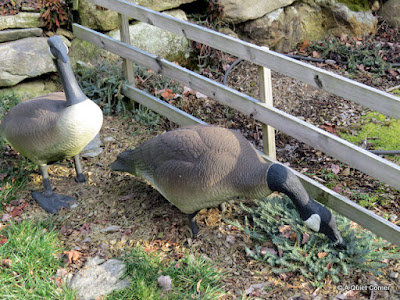 Sharing it all (Exercise, Fake Goose and Sunshine) with you and those at 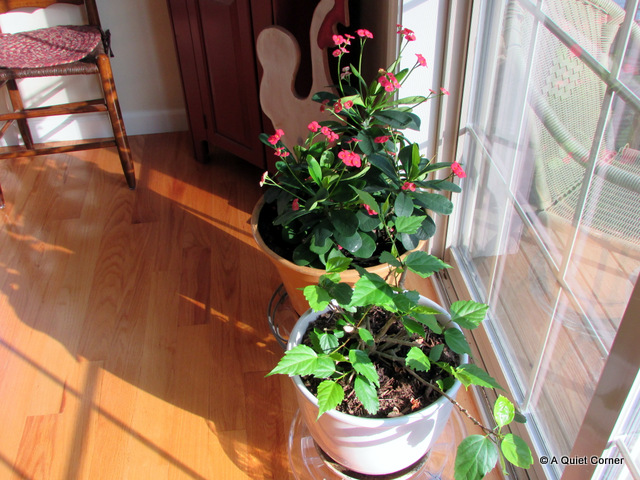 eileeninmd said…
I am glad your exercise routine is back to normal. The fake geese are cute. We are slow to see any plants here. Great series of photos. Thank you for linking up and sharing your post. Have a happy new week ahead!
February 21, 2016 at 5:37 PM

Blondie's Journal said…
Oh my friend...I can't go one millisecond without exercising before it becomes horrid again. I simply hate it and have to force it upon myself.

Ann said…
I have had first hand experience with the aching muscles from going full steam ahead. I'm sure it would take much less to do me in than it did you though. Most likely if I had done all the exercises you did I would be paralyzed...lol
February 22, 2016 at 5:53 AM

MadSnapper said…
love that last shot of the sunshine on the floor and plants. beautiful. perfect place to find a volunteer plant, right under the beak of the goose.. owie owie on sore muscles. i do understand the feeling after a work out. when we leave the YMCA we feel like we could jump giant buildings. of course by lunchtime it would have to be short buildings.
February 22, 2016 at 9:21 AM

Sylvia said…
JP, I'm glad you are getting back to regular routine following the accident. Sometimes the mind forgets and the body reminds. Sylvia D.
February 22, 2016 at 10:38 AM

Anonymous said…
I lost my lost bluebells. I think it might have had something to do with a digging dog. Fun geese!
February 22, 2016 at 8:17 PM

Small Kucing said…
Lol...it would have been worse if you are in my country ...after Chinese new year we had to hit the gym crawling.

Lorrie said…
Oh, I hear you about the gym. I'm trying to get back into my exercise routine and it's amazing how quickly one loses strength and stamina.
The sunlight on your houseplants is very pretty.
February 23, 2016 at 7:56 PM

My Little Home and Garden said…
I need to move this body of mine more than I do, so your post was a bit of a nudge in the right direction. It looks like spring in not far off in your area. Catchy blog post title, by the way!